Lesson 22: “The Lord Looketh on the Heart”

Gospel Doctrine Lesson 22 presents students with an invitation to see others in the way God sees them, by looking carefully at the human soul rather than a person’s physical appearance.  The lesson title derives from the story of the anointing of David as king over Israel, when the Lord declared unto the prophet Samuel,

“Look not on his countenance, or on the height of his stature; because I have refused him: for the Lord seeth not as man seeth; for man looketh on the outward appearance, but the Lord looketh on the heart” (1 Sam. 16:7). 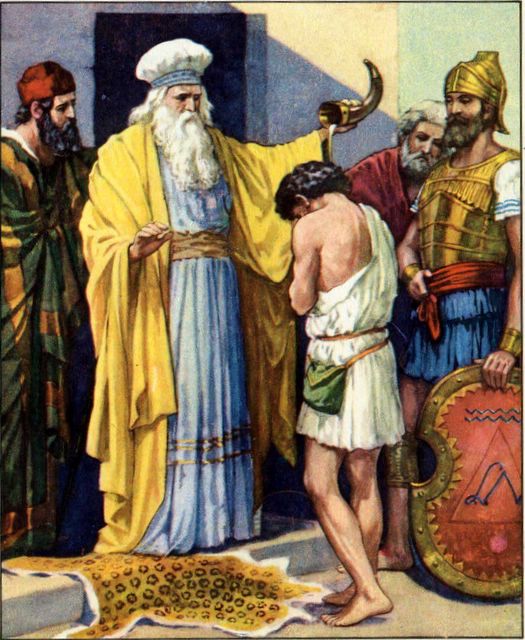 This Old Testament passage addresses the fundamental difference between the defective judgment of man versus the perfect ruling of God.  In choosing a future leader for Israel, the Lord encouraged Samuel not to look at a candidate’s physical appearance or stature.  Indeed, these were the exact qualities identified with Saul who proved deficient as king (see 1 Sam. 9:2; 10:23).

In the original Hebrew, the King James expression “outward appearance” represents the word ‘eynayim that literally means the “eyes.”   Man is able to look upon the eyes of a person, but God, in his infinite wisdom, possesses the ability to look within. Throughout the Old Testament, the heart denotes the human soul or personality.  As the seat of feeling and emotion, the heart refers to “one’s inner self.”1    The term, however, can appear in biblical thought as a synonymous expression with the eyes, as witnessed, for example, in the declaration of the Psalmist:

“The statutes of the Lord are right, rejoicing the heart;

“the commandment of the Lord is pure, enlightening the eyes”

This passage suggests that obeying the commandments of God perfects the whole person. In the Book of Mormon, the same concept provides the conceptual background to Alma’s questions regarding spiritual rebirth:

“Have ye received his image in your countenances? Have ye experienced this mighty change in your hearts?” (Alma 5:14)

Within the Old Testament, the importance of an Israelite king maintaining a pure heart provides the focus of several scriptural texts.   For example, the term “heart” functions as a leitwort or theme word, repeated throughout the description of king Solomon’s fall from grace.

“But king Solomon loved many strange women… of the nations concerning which the Lord said unto the children of Israel, Ye shall not go in to them, neither shall they come in unto you: for surely they will turn away your heart after their gods: Solomon clave unto these in love… and his wives turned away his heart. For it came to pass, when Solomon was old, that his wives turned away his heart after other gods: and his heart was not perfect with the LORD his God, as was the heart of David his father… And the LORD was angry with Solomon, because his heart was turned from the LORD God of Israel, which had appeared unto him twice “(1 Kings 11:1-9)

This poetic use of “heart” in the description of king Solomon’s loss of divine favor draws upon the Deuteronomic law of the king, which includes the Lord’s warning directed to the Israelite monarchy:

“Neither shall [the king] multiply wives to himself, that his heart turn not away: neither shall he greatly multiply to himself silver and gold” (Deut. 17:17)

These standards set forth in Old Testament scripture regarding king David and his heirs had a direct impact upon the Nephite’s view of proper kingship.  Jacob, for example, drew upon this imagery from David’s initial anointing and the fall of Solomon in his great temple sermon.  The account of Jacob’s sermon begins:

Jacob then transitions by stating that his people had violated the Deuteornomic expectations of kingship:

“… began to grow hard in their hearts, and indulge themselves somewhat in wicked practices, such as like unto David of old desiring many wives and concubines and also Solomon, his son. Yea, and they also began to search much gold and silver, and began to be lifted up somewhat in pride” (Jacob 1: 14-16)

Significantly, after this introduction drawing upon the Deuteronomic law of the king, Jacob drew upon the leitwort ‘heart” all throughout this sermon that addresses his people’s sins after the manner of king David and Solomon:

“I must testify unto you concerning the wickedness of your hearts” (Jacob 2:7)

“My heart would rejoice exceedingly because of you” (v. 22)

“Ye have broken the hearts of your tender wives.. and the sobbings of their hearts ascend up to God against you… many hearts died, pierced with deep wounds” (v. 35)

In his early years, David found favor in the sight of God who was able to look upon David’s inner most being and see a righteous soul.  This Gospel Doctrine lesson not only invites Latter-day Saints to avoid judging others based upon external impressions, the material also encourages students to judge their own hearts in accordance with the expectations God has provided.

June 9, 2010 Is God Omnipotent?
Recent Comments
0 | Leave a Comment
Browse Our Archives
get the latest from
Latter-day Saint
Sign up for our newsletter
Related posts from One Eternal Round