Why We Can’t Wait is the familiar title of Martin Luther King Jr.’s book from 1964. The volume includes his famous “Letter from Birmingham Jail” (written April 16, 1963) and makes an argument to recognize 1963 as the beginning of “the Negro Revolution” while extolling the effectiveness of nonviolent resistance.

King’s “Letter” issues a call for urgency. He wrote it as a response to eight local white clergymen who had criticized his activities in Birmingham and appealed for a more patient and restrained approach to lobbying for civil rights. The “Letter” expresses King’s deep disappointment with “the white moderate,” who “paternalistically believes he can set the timetable for another man’s freedom.”

The primary argument of the “Letter” still speaks today. In fact, that basic argument spoke long before King came along.

King never cites the story of Luke 13:10-17 in his book. But he could have done so, for “Why We Can’t Wait” could also be an appropriate title for the declarations Jesus makes in this biblical passage.

Don’t mistake the story about a woman with a debilitating spinal condition as “just another healing story.” It’s about more than Jesus astounding people with his power and frustrating his adversaries. This is not a story about power embarrassing weakness. It’s not a story about new things replacing the old. At its core, it’s a story about what God intends. It’s about the urgency of seeing God’s intentions brought to pass without delay.

The key to the story is Jesus’ argument against a synagogue leader who objects to the act of healing a woman on the Sabbath. The leader expresses no qualms about healing. Presumably he’s all for promoting human flourishing. But this woman’s condition was not life threatening. She had learned to live with it over nearly two decades. So no healing today, please. Just wait for the Sabbath to pass. Surely she can wait just a little more time.

Jesus’ response to the synagogue leader is as scathing as it is succinct. Neither the Sabbath nor any tradition or theological principle is an excuse for willfully extending suffering and delaying wholeness.

There’s a deeper, unstated logic at work in Jesus’ words: the purpose of the Sabbath actually expresses the reason why Jesus should restore the woman now. The synagogue leader has misconstrued the basic intention of observing the Sabbath. According to Deuteronomy 5:12-15, the Sabbath, at its heart, offers a weekly reassertion of how much God values freedom and detests injustice:

The original intention of the sabbath, according to Deuteronomy, is to provide relief, even if only temporary, from any system that would deny a person or any part of creation a share of rest, peace, wholeness, dignity, and justice. The synagogue official says, “Wait just one more day.” Jesus answers, “No. The Sabbath is a pretty good day for setting people free. In fact, the purpose behind the Sabbath—the value God places on wholeness—necessitates that I do this now. We can’t wait.”

In Luke 13 Jesus reaffirms what his scriptures told him: God sees no virtue in suffering. Nothing can be gained by consigning a fellow human being to one more day of unnecessary torment. To perpetuate injustice is to defile the holiness of the weekly Sabbath day that God ordained. To deny freedom is to offend the God of the Exodus. It’s because of who God is that Jesus can’t wait.

Further, by characterizing the woman’s impairing, painful, and humiliating spinal condition as a form of “bondage” from which she needs to “be set free,” Jesus calls attention to the dehumanizing nature of suffering. Suffering includes not just the physical pain and lost opportunities an individual can experience, but also the scorn, alienation, and disdain that the human family so heartlessly heaps on its own members.

For crying out loud, Jesus says, you release your own animals to give them basic care, but you want her to wait for relief? Don’t you realize she is “a daughter of Abraham,” a person to whom God has expressed unambiguous favor?

“She is a daughter,” Jesus says. “I AM A MAN,” read the famous signs that marchers carried and wore during civil-rights demonstrations in the 1960s.

Maybe plenty of people who first read Why We Can’t Wait in the sixties or who witnessed the protests on television would have replied to one of those sign-bearing activists, “Yes, of course you’re a man. Your day of freedom will come soon, though. Just hold on.”

The white religious leaders in the crosshairs of Martin Luther King Jr.’s “Letter” were not outliers but reflected the views of majority American society. One survey from 1964, the year after King penned his “Letter,” found that:

King was especially disgusted by the lukewarm posture of white faith leaders when he wrote in his jail cell. Similarly, Jesus once criticized a religious leader for clinging to a misshapen understanding of the Sabbath and for being ignorant of just how urgently God desires to see human wholeness restored. In an analogous way, King railed against churches that perpetuate injustice by hiding behind theologies that expect God’s blessings to come only in the future.

Why do some people see pressing moral imperatives where others fail to sense a need for urgency? It is not always a simple matter of empathy or perspective. In Jesus’ words to the synagogue official and in King’s manifesto, both men take aim at problems that are deeper than cowardice or callousness. Sometimes people’s understanding of God and the nature of Christian faith plays a part, too.

Theology and Other Obstacles

Two different views run through the New Testament, and they are present in Christian tradition more generally. To put it rather simply, one of these views commends patient endurance as people wait in expectation of what God will bring to fruition in the future. The other view expresses a restless desire to see God’s intentions for human society spring into existence now. Both views agree that something new has happened through Jesus, and that God has set the world onto a new course, but both views also know all too well that life continues to be filled with misery, oppression, pain, and loss. The first view says that faith in God makes people content to endure the current miseries. The second view says that faith in God makes it crucial that we can’t wait.

So, theology—our understanding of God and the nature of Christian faith—sometimes becomes an obstacle that prevents people of faith from acting to reform their societies.

Other factors also make people prone to wait, even if waiting will perpetuate the suffering of another. For one thing, those who live comfortable and protected lives can usually see advantages to waiting. Comfort and privilege provide a climate for selfishness to thrive.

A rigid commitment to idealism and principles also slows down some well-meaning people. An unyielding embrace of certain ideals can lead us to turn up our noses at good strategies for taking steps forward because we insist on holding out for what we think is the perfect political or ideological solution.

The good news from Jesus’ ministry and the Civil Rights Movement is that all of those obstacles can be removed. A Moral Revival is within reach, and perhaps coming soon to a city near you. There are “moral defibrillators” among us, speaking out in houses of worship, on statehouse lawns, and within sacred texts. Their voices can correct defective theologies, arouse people from their comfort, and teach the ways of effective organization.

Waiting is not always a bad idea…except when suffering is at stake. If another daughter or son is in anguish or peril, then my patience—or my unwillingness to listen—becomes complacency.

The anonymous woman’s oppression led Jesus to act on the Sabbath. The oppression of a whole segment of society led King to press forward. Whose similar circumstances demand urgency today? Who are the people whose rights are at risk, only one legislative action away from having their whole lives upended? Who are unable to get a fair shake? Who experiences fear on a regular basis? Who has been forgotten behind bars?

Why do so many of us still think we can wait? 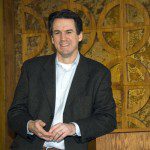 Matthew L. Skinner is a native Californian who now braves Minnesota winters, serving as Associate Professor of New Testament at Luther Seminary in Saint Paul. His research interests focus on the Gospels and the book of Acts, the cultural world reflected in the New Testament, and the Bible’s potential for shaping the theological imaginations of its readers. Sought-after nationally as a teacher for conferences and congregations, he helped create the free site EnterTheBible.org and contributes frequently to WorkingPreacher.org. He’s part of the team that produces Sermon Brainwave, a free weekly podcast for preachers and others exploring the biblical texts assigned by the Revised Common Lectionary. He is an ordained minister in the Presbyterian Church (U.S.A.). His most recent book isThe Trial Narratives: Conflict, Power, and Identity in the New Testament, and he coedited Shaping the Scriptural Imagination: Truth, Meaning, and the Theological Interpretation of the Bible. For more information and more of his writings, visit MatthewSkinner.org.

August 22, 2016 Why Jesus Wouldn't Be a Democrat or a Republican (Luke 14:1, 7-14)
Recent Comments
0 | Leave a Comment
"Thank you for this post. You touch on one of my dilemmas - honoring our ..."
John Gills Support Those Who Have Served (Luke ..."
"I did not see Mihee place any restrictions on thanking veterans everyday. She just talked ..."
WayneMan Support Those Who Have Served (Luke ..."
"Your article is so deceiving. Posted for Memorial Day weekend and your first sentence says ..."
Mary Support Those Who Have Served (Luke ..."
"You idiot Boko isn't a person. Typical thoughtless rambo crap. Sit down, nobody needs your ..."
GayPirate Chibok Girls: We Will Not Be ..."
Browse Our Archives
get the latest from
Progressive Christian
Sign up for our newsletter
POPULAR AT PATHEOS Progressive Christian
1

QAnon and Gullible Christians: The Devil...
The Thoughtful Pastor
Related posts from On Scripture - The Bible

"It has been done in your name": When...
One of my teaching teammates this semester in the interdisciplinary course I...
view all Progressive Christian blogs
What Are Your Thoughts?leave a comment
Copyright 2008-2020, Patheos. All rights reserved.