I have a vivid memory from a Bible class in the late 1980s in which we were learning the classic formulations, seen in this week’s Torah portion, that if the Israelites obey God’s laws, the rains will come in the right season and all will be well. If, however, the Israelites abandon the covenant, the earth and their enemies will work together to utterly destroy them. One of my classmates scoffed. “Come on,” he said. “The rain won’t come if we are unethical! We know the weather has nothing to do with our moral behavior.”

The professor was an elderly man, harsh and passionate. From the distance of more than 25 years, it’s difficult not to describe him as prophetic. “Do we really know that?” he reproached the student. “Such arrogance!”

Today, of course, we know: The rains will not, in fact, come in their season if we continue down our current path. The evidence is piling up in ever-grimmer reports of just how our behavior, moral and other, does impact the weather, and it is difficult to ignore the Torah’s rebuke. Today, as we read the text, it is especially striking how the Torah again and again comes back to the well-being of the land.

“If you walk with My statutes and keep My commandments and do them, then I will give your rains in their season, and the land shall give its produce, and the trees of the field shall give their fruit” (Lev. 26:3-4). But if the commandments are not kept, the resulting war, famine and exile result in the utter desolation of the land. This desolation is seen as a punishment for the people, but it is actually a relief for the land: “As long as it is desolate, it shall rest, the same rest which it did not have in your sabbaticals when you dwelled there” (Lev. 26:35).

There are some environmental activists who are starting to say aloud that we may have frittered away the limited window of time in which we could reverse the disastrous patterns of climate change with recycling and longer-lasting lightbulbs, when what we really need(ed) is paradigmatic and systematic change. It may be that we are now facing the fact that our deeds are too little and too late with the possible consequence of the kind of desolation described in our Torah portion. Some of these activists even say that it might not be such a bad thing if people disappeared and the Earth was given a chance to rest.

Our tradition would disagree. It is true that according to the Talmud, the rabbinic consensus was that it would have been better for human beings to not have been created. But now that we are here, we must bring greater mindfulness to our deeds (B Talmud, Eruvin 13b), and our portion gives us some suggestions on how to do that.

Returning to the first verse of the portion, we notice that the text specifies three different verbs for following God’s commandments: “If you walk with My statutes, keep My commandments and do them,” then you and the Earth will flourish. Why the repetition? Why do we need all three verbs? The Hasidic master Rabbi Levi Yitzhak of Berditchev understood “walking” to be essentially an internal spiritual practice. When we perform a commandment with intention, not just go through the motions, we may be able to do that commandment again in the same elevated state. In this fashion, a righteous person can “walk,” or proceed, from one level of holiness to the next.

This is an instruction of cultivating awareness. It is easy in the face of something as huge as climate change to continue going through the motions of our lives because thinking about the implications is just too scary or overwhelming. But the Torah reminds us: The holy and the everyday — even the unpleasant — are intrinsically interconnected. We have the opportunity to “walk” to higher and higher levels of holiness by becoming more aware.

From the world of awareness, we can move to action in the world. The second verb is “keep,” but “tishmeru” can also mean to “guard” or “protect.” It is the same verb that is used in Genesis when God placed the first human being in the garden to work in it and protect it (Gen. 2:15).

When we ground ourselves in a position of holiness, we may have greater clarity and perhaps be better equipped to make complicated decisions about what it means to guard or protect the Earth beyond the token gestures of recycling and lightbulbs. For example, should we direct the bulk of our efforts toward local initiatives, or should we focus on more systemic advocacy issues? What does it mean to be ethical consumers in our complex, interconnected world? How can we organize to challenge the underlying assumptions of what is valued in the marketplace? Also, this verb, like the other two, is in the plural form, reminding us that we cannot do this work alone. Who are our partners and our leaders? Who inspires us and keeps us going?

And finally, we move to the last exhortation: Just “do” it! Sometimes the “doing” will be turning inward for greater wisdom, clarity and holiness. Other times it will be facing outward and engaging in organizing and advocating, planting and caretaking.

Throwing up our hands is not the answer. We may be facing unprecedented conditions, but we also can return to ancient insights that teach us that humans are much more intertwined with the fate of the land than we moderns think. The task is great and the time is short. For the sake of the land and for our own sakes, let’s get to work.

Rabbi Lisa L. Goldstein is the Executive Director of the Institute for Jewish Spirituality. A California native, she was previously the Executive Director of Hillel of San Diego. She has served as a Group Leader for the American Jewish World Service and was a Jerusalem Fellow at the Mandel Leadership Institute where she worked on a project combining justice work with contemplative practice. She teaches Jewish meditation in a variety of contexts and enjoys climbing mountains (most recently Mt Toubkal in Morocco) for the view and for the beauty along the way.

ON Scripture – The Torah is a weekly Jewish scriptural commentary, produced in collaboration with Odyssey Networks and Hebrew College. Thought leaders from the United States and beyond offer their insights into the weekly Torah portion and contemporary social, political, and spiritual life.

May 29, 2014 Overhearing God’s Voice (Naso, Numbers 4:21-7:89)
Recent Comments
0 | Leave a Comment
Browse Our Archives
get the latest from
Best of Patheos
Sign up for our newsletter
POPULAR AT PATHEOS Jewish
1 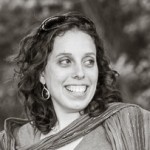 Jewish
How to Love Your Neighbor (Kedoshim, Leviticus 19:1-20:27)
On Scripture the Torah
TRENDING AT PATHEOS Jewish