As part of our efforts at sharing stories and creating healing circles, we are launching blog circles here at TAN. Each month we will post a brief message introducing the theme for the month, and inviting you to participate in the circle. All you need to do is put your name and link into the Mr Linky widget at the end of this post, and your blog post can be included in the circle. Posts are welcomed throughout the month (and beyond if you write something later and want to share). We hope you will participate!

The theme of the December Blog Circle is Holidays After Loss. Our contribution is a repost from January 9, 2012, reporting on the first Spirit Babies ceremony at Winter Solstice in San Francisco. The second annual Spirit Babies ceremony – for all whose lives have been touched directly or indirectly by miscarriage, abortion or stillbirth -will be held this Sunday, December 16.

On the night of the Winter Solstice this year, between fifty and sixty people gathered in the chapel at the First Unitarian Universalist Church in San Francisco.  Women and their loved ones came to honor their ‘spirit babies’ – those who had been lost due to a miscarriage, abortion and stillbirth.  It was standing room only.

As people entered the chapel, we invited them to write out thoughts and prayers and place them on the altar.  For those who couldn’t make it to the ceremony, we transcribed their emails and added them to the altar so they could be there with us in spirit.  The altar had a statue of the Goddess Tara in the middle of it, surrounded by flowers and candles.  We were greeted at the beginning of the ceremony with a beautiful voice singing “Amazing Grace.”

Isa Gucciardi from the Foundation of the Sacred Stream officiated the ceremony.   She talked about loss and the Winter solstice, including a Buddhist story of woman grieving the loss of a baby (the transcript of her speech can be found here). Chandra Alexandre, the founder of Sharanya and Jeremiah Kalendae, Beyond Sunday Minister from the First Unitarian Universalist Church, contributed stories from their spiritual work and readings from different traditions around the world.  Several women whose lives have been affected by miscarriage, abortion and stillbirth were brave enough to share their stories in front of everyone and lift their voices in song.  One woman invited us to speak the name of the child we had lost.

Perhaps for the first time, we were not alone facing our grief.   Isa said to us “You are all mothers” and let us sit with that thought for a while.  She led us through a guided meditation to connect with the power and spirit of the Earth – because, as she says, “it is the Earth that teaches all mothers how to mother through her example.”  After the meditation, we lit candles, brought them to the center of the room and placed them into a large cauldron of water as we sang about light returning both to the earth and to our lives.

After the ceremony, we gathered for food and drink in a room across from the chapel.   We wanted to give people time for silent prayer, reflection or to talk to someone if they needed support.  We collected all of the papers from the altar and will plant them in the springtime with daffodils.

Pregnancy loss can be so isolating.  Not a lot of people know what to say to women who have had a miscarriage, abortion, or stillbirth.  One goal for this ceremony was to honor our spirit babies and ourselves. Another goal was to have people leave the ceremony with a feeling of peace.  I can’t speak for everyone but I certainly left feeling more at peace and with a sense of community.

It was community after all that made this ceremony possible. Amber Dawn Hallet asked the church about sponsoring the ceremony, organized most of the people who contributed to it and led the campaign to get the word out all in a span of three months.  People who had never even met each other in person before the night of the winter solstice gathered in the chapel of the UU Church to make this sacred space together.

I have to admit, I was concerned about anti-abortion people showing up to protest the ceremony.  Put the word ‘abortion’ on anything and protest is a possibility.  I even asked my husband to act as a bouncer at the door if need be.  Seminary student Gina Pond and a friend of hers did some protective spiritual workings and maintained a physical presence at the doors to the ritual space before and during the ceremony.  I’m sure that did a lot to help and luckily we were left undisturbed.

As I escorted a woman out after the ceremony, she asked me “Do you do this every year?”  I responded, “We will. This is the first time we’ve done this.”  A woman who had just recently had an abortion was there that night.  Another told us she had been waiting over 40 years for something like this.  If anything convinced me that we had done the right thing by holding this ceremony, it was hearing from those women.

My hope is that we can continue to hold this ceremony once a year and inspire people from around the country to hold similar ones where they live. To that end, there will be more information about our ceremony and resources listed at the Spirit Babies website.  No one should have to go through the grief of a miscarriage, abortion or stillbirth alone.   The Spirit Babies ceremony is one way to make it so fewer of us will have to.

Editor’s Note: Read about the origins of the Spirit Babies ceremony in Silverwing’s previous post. 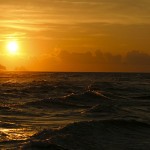