…She who defends and protects
She who opens her heart just a little wider
She who trusts
She who tries again
She who gathers to her breast
She who gathers women in ritual
She who hopes
Prays
Fears
She who loves so deeply
That it crosses all boundaries
To eternity.

(*This post is excerpted from Goddess Mother by Molly | Feminism and Religion.)

The Motheredness of the World

for the frailties of human mothers, giving women a more perfect mother…” This is not actually true for me; I’m fortunate enough to have an excellent human mother. I am more liable to see myself as a mother reflected in the empowering imagery of the Goddess as mother than I am to feel “mothered” by Her—I feel like she affirms my worth and value in my own maternal role. She gives me strength and inspiration to be a better mother to my children. In this way, I then agree with the hope of spiritual feminists that “this great mother goddess will have a transformative effect upon the social valuation of motherhood.” (Eller, p. 143)

I am also of the opinion that Mother Goddess imagery may well be less about women as mothers and more about the motheredness of the world…Every person and mammal on this planet…since the dawn of humanity has had a mother. It is a truly unifying feature. And, it isn’t about the role, it is about the primal relationship. The root of life. As Naomi Wolf writes in Misconceptions while reflecting on an ordinary street scene and suddenly understanding the web of life and the universality of motherhood (even the squirrels!):

We were all held, touched, interrelated, in an invisible net of incarnation. I would scarcely think of it ordinarily; yet for each creature I saw, someone, a mother, had given birth….Motherhood was the gate. It was something that had always been invisible to me before, or so unvalued as to be beneath noticing: the motheredness of the world.

…I’ve noted before that it is very important to me that my children, particularly my sons, are being raised in a home in which female connection to divinity is very normal and that Goddess images are all around them. I hope that their default symbol and system of belief as adults will therefore include Goddess, regardless of how their individual spiritual paths develop. As an example, I have a book for children called Big Momma Makes the World in which a full figured, practical-looking woman holding a baby on her hips creates heaven and earth and everything in between and, “it was good, it was real good.” I love that my sons are growing up with this sort of imagery about creation. For me, Goddess religion and spirituality is as much about sociocultural valuation (or devaluation) of women and making a feminist political statement, as it is about lived experience. Both are very valuable to me.

Ariska Razak writing in her thoroughly amazing essay “Towards a Womanist Analysis of Birth” (Reweaving the World), speaks boldly about the significance of birth to the health of the planet

…for the health of our species, we better say yes. The real plague that threatens us is our attitude toward one another. Why is birth not considered a major psychic event? Where is our birth art? Where are our birth stories? Why don’t we celebrate birth instead of war? Why do we restrict fathers from participation in birth? If we begin with loving care for the young, and extend that to social caring for all people and personal concern for the planet, we would have a different world. If we understood, and celebrated birth, we’d seek more humane alternatives to painful medical processes—we’d reclaim the importance of love and warmth and human interaction…In a society that wishes us to see men as devoid of feelings, let us hold an image of men as nurturers. Women are birth-givers, but men can care with them. Let us change our institutions. Let us demand that men come with us. Let birth teach them surrender. Let pain teach them transcendence. Let the shared experience of childbirth reclaim the human soul. (p. 172, emphasis mine)

I have been creating birth art about my pregnancy, birth, and motherhood experiences since my first pregnancy in 2003. And following a significant miscarriage in 2009 and a subsequent pregnancy-after-loss journey in 2010, I began creating a series of polymer clay goddess sculptures. These sculptures became a 3-D journal of my life with my daughter. Each figure either had a message for me or was created to express a message or a lesson or to incorporate some aspect of my identity or to capture a memory. My most recent figures are a collection of what I call “mamapriestess” figures, encompassing the balance of priestessing my community and priestessing my own hearth.

In early February as I worked on a new sculpture, my six year old son worked at the table too and presented me with a special gift of his own design:

“This is the Goddess of Everything,” he told me. “See that pink jewel in her belly, that is the WHOLE UNIVERSE, Mom!!”

via Goddess Mother by Molly | Feminism and Religion 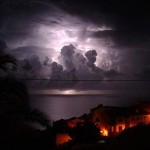 What It Means To Put Your...
John Beckett
Related posts from Pagan Families