Why Kids Need Touch, and How Consent Culture Helps Them Get It

This month’s Pagan Families Flash Point is on sexuality. How do we foster healthy attitudes about sex in our kids?

First, let’s be clear on what we mean by “kids.” For adolescents, sex and sexual identity are important issues, and adolescents themselves are in a special state, no longer children but not yet adults. The needs of adolescents for education and support around these issues are complex and deserve their own post (or really, their own book!).

So, for the purposes of this post, let’s put adolescents aside and broaden the issue beyond “sexuality.” Building the groundwork for healthy adolescent sexuality begins with what we teach our babies, toddlers, pre-schoolers, and elementary-aged kids about two things: loving, non-sexual touch and consent.

If you’re a parent or a caregiver, you’re probably aware that most children want a great deal of loving touch. You may not know, however, that loving touch does more than bond people together emotionally. Children, and especially infants, need pleasurable touch in order to develop biologically. Farmers, zookeepers, and other people who raise mammals have known for a long time that baby animals who are not licked and massaged by their mothers don’t eliminate wastes properly and die.

Infants who don’t experience loving touch die as well, though the exact mechanism is a little more mysterious than with rats or pigs. In the nineteenth century, a number of studies were conducted on urban orphanages where the rate of infant deaths from a mysterious wasting disease sometimes approached 90%. In these understaffed orphanages, although the infants were kept clean and fed, there was rarely time for the staff to pick up, hold, or play with them. Further, expert childrearing advice of the time discouraged parents from picking infants up when they cried, fearing that this treatment would “spoil” the children. Both of these factors led to the infants receiving only enough touch to take care of their obvious needs.

Researchers were stunned, then, to find that infants who were picked up and lovingly cuddled would either recover from or never develop the wasting disease. Today, hospitals and orphanages know that touch is a necessity, not a luxury, for infant care. Although the need for touch becomes somewhat less of a life-and-death issue in older children, touch deprivation is correlated with aggressive behavior in both children and adults, and touch therapy such as massage has been effective in treating disorders such as anorexia, anxiety, and depression in adolescents.*

Knowing that children need loving touch, and lots of it, to develop normally, we should be disturbed by the way schools are eliminating touch opportunities outside of the immediate family—for instance, forbidding elementary school teachers to hug their students and punishing children for holding hands while in school. We all share concerns about inappropriate touch and abuse. But it’s important to remember that neglect is abuse as well, and that touch deprivation causes suffering. To draw a parallel: we are certainly all concerned with our children being harmed by pesticides on fresh produce. But if we eliminate all fresh produce from our children’s diet to make sure we avoid pesticides, we’re not protecting their health at all, but harming it.

So how do we create opportunities for children to give and receive the loving touch that they need? The answer is to build consent culture.

What is consent culture? Urban Dictionary has a great off-the-cuff definition:

A consent culture is one in which the prevailing narrative of sex is centered around mutual consent. It is a culture with an abhorrence of forcing anyone into anything, a respect for the absolute necessity of bodily autonomy, a culture that believes that a person is always the best judge of their own wants and needs.

A consent culture is also one in which mutual consent is part of social life as well. Don’t want to talk to someone? You don’t have to. Don’t want a hug? That’s okay, no hug then. Don’t want to try the fish? That’s fine. Don’t want to be tickled or noogied? Then it’s not funny to chase you down and do it anyway.

What does consent culture look like in communities? The basic practice is simple: Ask before you touch. Among people we don’t know well, asking verbally is a good idea, i.e. “May I hug you?” In many cases, however, asking nonverbally works just as well: you can open your arms for a hug and wait for the other person to mirror the gesture before hugging them. Note that asking is only half of the procedure; waiting for the enthusiastic “YES!” is the other half! A non-enthusiastic “yes” is usually a “no” in disguise.

Teaching moments about respecting the autonomy of others’ bodies abound when kids play together, and we can begin to convey those values when our children are quite small. As a new parent, I’ve been very grateful to other parents in my community for modeling how to teach consent culture for me when their kids play with my baby. “We don’t force-feed babies,” says one mother to her toddler as she shows him how to offer the pacifier rather than just jamming it into the baby’s mouth. Another parent cautions his daughter as she hugs and bounces the baby: “Listen to the sound he’s making, he’s saying no, so you need to stop. Now he’s smiling because you’re being more gentle.”

Even at very young ages, children can be taught the habit of asking for the touch they want and respecting others’ boundaries. Kids who grow up believing that they have the right to control their own bodies are better-equipped to initiate respectful touch, to clearly say yes or no when touch is offered, and to interfere when they see someone else being violated.

A Game for Teaching Consent

Here’s a simple game that you can play with elementary-aged and older children. Not only does it teach consent and empathy, but it’s a lot of fun and great for making friends! Adults should be present to model the game, make sure the rules are being followed, and insure safety, as children playing this game can easily become rambunctious.

This game provides wonderful opportunities for discussion. How does it feel to say “No thanks,” or to be told “No thanks”? How does it feel to say “YES”? What kinds of touch were really fun? Did anyone say yes to a touch that turned out not to be fun? What did they do, and what did their partner do? Did anyone say “no” and then change their mind? What was that like? What was it like for their partner?

Unless the participants are already part of a group where physical, group-bonding games are played regularly, the facilitators should inform the children’s parents before playing this game. Note that some younger children may struggle with the rules. Children who have difficulty keeping their hands to themselves, however, may be the ones who benefit the most from learning how to explicitly ask for touch; their tendency to harass or tease others may be the only way they know how to get the contact they want.

*For more information about these issues (with lots of footnotes), please see my book, Eros and Touch from a Pagan Perspective. (Request it via your local library!)

Parts of this post were previously published as “Consent Culture 101: Basic Practices and Teaching Games.” 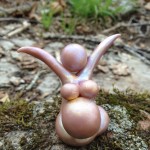 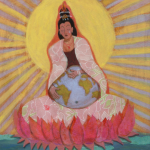