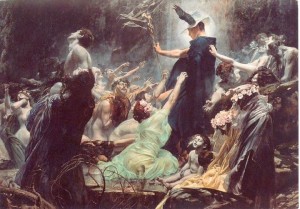 I’ve learned from Hermes a set of morals. They are not good ethical practices. They are things to do and to avoid to become more akin to Hermes. Interestingly, this is what religio, the origin of our word religion, originally meant, much like taboo in Fiji. The Kosher abstinence from pork is example. It keeps the observant Jew in such a fit state as to approach his God. In cultures world over, it is common for devotees of a Deity to take on pre- and pro-scriptions in the form of deeply committed promises. We know them as vows and oaths, some call them obligations. In Irish they are geasha, in Sanskrit samaya, in Tibetan damtsig. Keeping them accrues power, breaking them loses it. Repairing them becomes critical in these systems.

The aspirants of my line of Hermes’ priesthood take on certain obligations when they are initiated into each level of the priesthood. Some are commitments to practice: terrestrial, elemental invocations as a Dedicant; planetary, celestial invocations as an Initiate; and Deity devotion, union and pantheon exploration as a Priest-person. Monthly worship and offerings at the Dark of the Moon are enjoined, and progressively more intense Deity yoga practices, from biweekly, to weekly, to daily, develop the priest’s connection with the Deity.

Some of the requirements are ethical. From the beginning, the aspirants vow to never lie, cheat, or steal, except at war. In war, in real conflict, lying, cheating, and stealing, never mind killing in actual battle, are necessary for survival and success. But most of our activities and relationships are not at war. Honesty, forthrightness, integrity, and kindness should characterize our dealings with all people. The problem here is the God.

When we invoke any Deity we take on Their characteristics. Indeed, becoming like Them is one of the main reasons why we invoke Them. Yet invoking the Lord of Thieves has a certain anti-social side: we are ‘blessed’ with bonus points in lying, cheering, and stealing, and strongly tempted to do so by the divine thrust and bestowed capacity. This energy and drive, however, is just in us. In the Deity these dualities are resolved in complementarity. Both truth and lies, kindness and theft combine into a whole in the God. In humans, being only able to do or be one thing at a time, we get stuck on one side of the duality. So, from the Deity we also learn to speak true, give good measure, and benefit others, just as much as lie, cheat, and steal. From the discipline of the vow, we take on the obligation to do right by our fellows and cultivate that compassionate attitude.

However, the drive behind even these ethical principles is moral, it is from the Deity. Each and every one of these divinely instituted behaviors is an invocation of Hermes, expressed and received in the arena of that action. This is the true purpose of morals, to bring us closer to the Divine One we seek. And I wish you the best in your search…

This is my last post on Patheos, At the Herm. My focus is moving on to the specific work I do for Pagan magi, particularly in the Golden Dawn community. You will find me on my own website, Sam Webster Mage, and contributing to the Open Source Order of the Golden Dawn’s website. We are starting a new teaching facility using video conferencing called the Golden Dawn Academy to support our many distant students.

The OSOGD will be at PantheaCon presenting Saturday evening the ancient Egyptian Am Duat, the journey of that Sun at Night.

Come join us! But, for now, Good Night & Good Luck…

January 31, 2017
Recent Comments
0 | Leave a Comment
"I'd be curious how those who are inclined toward animism interact with modern philosophies, from ..."
Curious1 Hermes and the Spirits
"Yes! Both/and."
yewtree Hermes and the Spirits
""Besides expertise, the priesthood has other responsibilities which the laity do not take on. First ..."
Kalysto Hermes in Service
"Thank you for this timely article."The priest...serves and focuses on the Deity. Something of an ..."
Heron Michelle Hermes in Service
Browse Our Archives
Related posts from At the Herm