The Wind in the Willows

The Wind in the Willows March 1, 2012 Guest Contributor

At the local library I browsed the section of newly donated classics. They are smooth with the false appearance of being bound in leather. The Wind in the Willows caught my attention. I vaguely recalled the story of animals who dressed and acted similar to humans. Some, like the River Rat, had simple homes dugout in the earth. Toad though lived in Toad Hall with many grand rooms on a massive estate.

Though The Wind in the Willows is a Children’s Classic, it has a deep philosophical and religious message which I can appreciate now as an adult. If you read this book as a child, take the time to pick it up again. The stories are heart warming and funny.

The author, Kenneth Grahame, originally told the stories to his son. Alastair was blind in one eye and often ill. Eventually Kenneth wrote down the stories and it became The Wind in the Willows.

The book has the common theme of struggling with a sense of place. Whether it’s being comfortable with where you are at or facing things that need to be changed.

“The Mole had been working very hard all the morning, spring-cleaning his little home. First with brooms, then with dusters; then on ladders and steps and chairs, with a brush and a pail of whitewash; till he had dust in his throat and eyes, and splashes of whitewash all over his black fur, and an aching back and weary arms. Spring was moving in the air above and in the earth below and around him, penetrating even his dark and lowly little house with its spirit of divine discontent and longing.”

He digs and digs his way up to the surface to the fresh air and sun. Eventually he meets the River Rat who teaches him how to boat and they become close friends.

“Wayfarers All” chapter is about our inner stirrings and how we are pulled to listen to them as they change just as birds are called to migrate south then north and back again. Each location has its own benefits and the birds explain to the River Rat that they are content where they are until they feel the inner pull to the other land.

Sometimes we want a different life then what we have and we long for change thinking another place or lifestyle will make us happier so we become melancholy as the River Rat did after hearing the stories of the Seafarer Rat. The River Rat forgets all the wonderful things about his lifestyle. His good friend, Mole, has to help Rat break out of his depression.

Grahame also explores reactions to mystical experiences and direct encounters with the divine. Something that can be inspiring and devastating all at once. 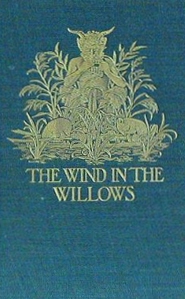 IMAGE: The Wind in the Willows had many different covers over the years. This one is by Kenneth Grahame. The background is blue and the rest of the art is the same collor light green. It shows Pan amid tall grass playing the pipes. On either side is a small mole and the other animal is difficult to make out. Public Domain.

“The Piper at the Gates of Dawn” chapter Mole and Rat are searching for Otter’s son. They hear music and experience heightened colors sounds and scents.

“Sudden and magnificent, the sun’s broad golden disc showed itself over the horizon facing them; and the first rays, shooting across the level water-meadows, took the animals full in the eyes and dazzled them. When they were able to look once more, the Vision had vanished, and the air was full of the carol of birds that hailed the dawn.”

They find the boy safe with Pan. Pan who has made it his task to care for the animals. To spare them a sense of great lose Pan makes them forget the experience and disappears though the feeling lingers.

“As they stared blankly in dumb misery deepening as they slowly realised all they had seen and all they had lost, a capricious little breeze, dancing up from the surface of the water, tossed the aspens, shook the dewy roses and blew lightly and caressingly in their faces; and with its soft touch came instant oblivion. For this is the last best gift that the kindly demi-god is careful to bestow on those to whom he has revealed himself in their helping: the gift of forgetfulness. Lest the awful remembrance should remain and grow, and overshadow mirth and pleasure, and the great haunting memory should spoil all the after-lives of little animals helped out of difficulties, in order that they should be happy and lighthearted as before.”

Because the characters are anthropomorphic animals I found it easier to embrace the seeds of truth in the author’s world. If we spend too much time like Toad racing along in our cars that go “poop poop” we miss out on gathering with friends by the river bank or fire. That’s what matters.

March 7, 2012 Community Linkage
Recent Comments
0 | Leave a Comment
Browse Our Archives
get the latest from
Pagan
Sign up for our newsletter
POPULAR AT PATHEOS Pagan
1

You Cannot Be Taught To Be...
For Puck’s Sake
Related posts from Staff of Asclepius

Banishing Negative Energies in the Home
With the many possibilities around for home contamination, a spiritual house cleansing...
view all Pagan blogs
What Are Your Thoughts?leave a comment
Copyright 2008-2020, Patheos. All rights reserved.