February 6th 2016 is the Japanese festival of Hatsuuma, which is the feast day of the kami (deity) Inari Ōkami. As a devotee of Inari, I thought now would be the perfect occasion to introduce this Japanese deity to Patheos readers. Here are six basic points to help you get to know this enigmatic and charismatic deity.

If I had to describe Inari in one word, it would probably be “mysterious.” Despite being one of Japan’s most popular deities (over one third of all Shinto shrines in Japan are devoted to Her), comparatively little is known about Inari. The origins of Inari’s worship are obscure. Unlike other prominent kami, such as the Sun Goddess Amaterasu, Inari is not mentioned by name in the Kojiki – an ancient chronicle of Japanese mythology which is the closest thing Shinto has to a sacred text. No-one can quite agree on the nature of His “personality,” and there’s no standard way to depict Her. Inari does not even have a fixed gender; sometimes He is portrayed as male, sometimes female, but more often than not as neither or both. That is why I tend to use male and female pronouns alternately when talking about Her. 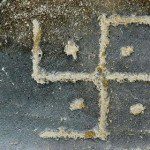 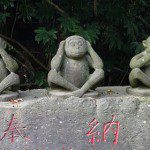 February 3, 2016 Year of the Monkey
Recent Comments
0 | Leave a Comment
"Should buy a shotgun and threaten the little git!"
Llewellyn Jaames Why I Don’t Do Rituals In ..."
""If you subscribe to a religion...your actions are sacrilegious..."? Rude to assume none of them ..."
Lady_Ashmire Pagan & Shinto News: Mist Descends ..."
""Stonehenge lookalike for sale in Devon."Thank the gods for my wives who have the wisdom ..."
kenofken Pagan & Shinto News: Mayor Of ..."
"You would need to put Gerald Gardner and Ross Nichols into that category as well. ..."
Gordon Cooper Pagan & Shinto News: Couple Find ..."
Browse Our Archives
Related posts from Pagan Tama