‘Anarchists’ deface Devon saint statue with words “Pagan Justice”
Devon Live
The graffiti, which is scrawled across the base of the statue, states: “God is dead. Pagan justice.”…

Hands of the Goddess still feeding families after 10 years
The Wild Hunt
Hands of the Goddess works with partners, friends, and other allies to ensure to link “individuals facing [a] crisis situation with needed services when and where appropriate.”…

A history of witchcraft in Kent: How ‘ritual magic’ lead to torture and executions across the county
Kent Online
Apart from these eerie reminders of times gone by, witchcraft in the criminal sense has pretty much vanished in Britain. But there is still a small group who practice modern variations of such beliefs…

Central Japan shrine with healing reputation appeals for info on anonymous letter
The Mainichi Shimbun
A Shinto shrine in central Japan’s Aichi Prefecture is looking to identify the anonymous sender of a request for an amulet, after receiving a letter that appears to be from the town of Karumai in Iwate Prefecture, northeastern Japan…

Shrine in Japan offers solace to those at home
The Hour

Onoterusaki Shrine in downtown Tokyo was livestreaming prayers on Twitter during a May 1-10 holiday, allowing those stuck at home to join rituals…

Kyoto’s major festival quiet without procession amid pandemic
Kyodo News
Kyoto’s Aoi Matsuri, one of the city’s three main festivals, was held Friday on a scaled-down basis, with the colorful procession that has been a major tourist attraction canceled amid the novel coronavirus pandemic…

Shinto priest’s nearly 10-year quest to help after 3/11 crisis
The Asahi Shimbun
Shinto priest Nobuhiko Ise is not one to forget his roots in Fukushima Prefecture, where the 2011 earthquake and tsunami disaster triggered a nuclear catastrophe that still resonates today…

Italy: Rome unearths ancient Roman sarcophagus at Ostia Antica
Wanted In Rome
An intact terracotta sarcophagus dating from the second century AD has been unearthed alongside the archaeological site of Ostia Antica, in a surprise discovery…

Zimbabwe: Masvingo man killed over witchcraft
Bulawayo 24
Masvingo police have reported that they are investigating a case of murder that originated from a witchcraft dispute among a certain family… 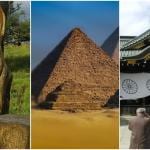 May 10, 2020
Pagan & Shinto News: 5,000-Year-Old Beltane Lighting of Fires Goes Ahead Despite Coronavirus
Next Post