I recently finished reading The Faith Instinct by Nicholas Wade. In one of the book’s concluding chapters Wade writes about American Civil Religion, the idea that the history and symbols of the United States have resulted in a sort of pseudo-state religion. The theory is not Wade’s, but it was the first time I had come across it.

Over the last few years the practice of American Civil Religion has become more and more pronounced. Many conservatives seem to see The Constitution as a near-religious document, second only to The Bible in terms of importance. While the whole point of the Constitution was that it could be changed and reinterpreted by succeeding generations, every line is now looked at as holy writ (at least when it’s convenient, no one talks much about counting some human beings as 3/5ths of a person), never mind that the Founding Fathers could not have imagined semi-automatic weapons or a healthcare system without leeches. In this way the Constitution is very much like The Bible, people pick and choose the things they want out of it, and ignore the parts that might stand in disagreement to their own positions (like the line “A well regulated Militia, being necessary to the security of a free State” in the Second Amendment).

The Constitution is not the only “scripture” at the heart of American Civil Religion. There are several other documents and speeches that carry nearly as much weight. The most obvious of those other scriptures is the Declaration of Independence. Containing the rhetorical flourishes of Jefferson and Franklin the Declaration is not just a letter proclaiming American independence, but a document outlining the rights and hopes of the American people (or at least white male landowners back in 1776).

There are several important Presidential addresses that are also seen by many as American Scripture. The first is Abraham Lincoln’s Gettysburg Address, a speech that was panned upon its initial delivery but is now looked at as the ten most eloquent sentences in the history of American discourse. Despite the best efforts of some, Franklin Roosevelt’s first inaugural address remains an important moment in American history, with people still recycling FDR’s “the only thing we have to fear is fear its self” line. Kennedy’s inaugural address retains a similar timelessness as does Eisenhower’s farewell address warning of “the military industrial complex.”

One does not have to be a sitting President in order for their words to be timeless and impactful. Martin Luther King’s “I Have a Dream” speech is (to my mind) the most powerful oratory by any American in our history. It’s also the most recent example of a speech becoming a part of American Civic Religion.

The Pledge of Allegiance is nearly a state-prayer, and to some a litmus test on patriotism. With the insertion of the phrase “under God” into the Pledge back in the 1950’s it’s recitation has become a religious and social exercise. In a sense, the Pledge turns America into the new Promised Land (Israel), Yahweh’s favorite shining city on a hill.

American Civil Religion goes beyond the scripture of documents and speeches, it also contains other symbols of a quasi-religious nature. The United States is a country of archetypes, with many of them containing a pronounced pagan flair. With her sword and scales Lady Justice is a symbol of the idea that there is “liberty and justice for all,” a founding principle of America’s judicial system.

The Statue of Liberty has become the archetype Lady Liberty, and it’s hard for me to think of her without hearing the words “give me your tired, your poor, Your huddled masses yearning to breathe free . . .” She’s the embodiment of being able to build a better life through the freedoms we have in the United States. The recent image of Ladies Justice and Liberty kissing is especially powerful as a symbol. With the end of DOMA, there is now even more liberty and justice in American society. Male archetypes abound as well. While sometimes overshadowed by his female peers, Uncle Sam remains a popular figure in America as a sort of Fourth of July Santa Claus.

Archetypes aren’t the only religious heroes associated with American Civil Religion. We’ve succeeded in turning a lot of our political (and military leaders) into near demi-gods*. Memorials for men like Jefferson, King, and Lincoln are temple-like in their grandeur and power. Not all cults are universal, one person’s deified hero might be someone else’s villain. Figures like Ronald Reagan and Cesar Chavez are hailed and scorned depending on certain political proclivities. Figures can also be regional or cultural in their appeal, as someone who grew up down South I can attest to just how many people admire General Robert E. Lee in the former Confederacy. (My personal choice here is Oglala Lakota leader Crazy Horse, he and Sitting Bull both deserve federal holidays.)

The heroes of American Religion are constantly being co-opted and misinterpreted for political gain. The deism of Thomas Jefferson has been overlooked by many who have attempted to insert an Evangelical Jesus into places where that messiah did not exist. Similarly, the Hellfire Club’s Benjamin Franklin has been romanticized to the point of caricature. Many of America’s deified heroes are now more myth than man; their failings ignored by a general populace that refuses to believe any of our “Founding Fathers” were capable of making mistakes.

America also has its own totem animals. The Bald Eagle, besides being our national bird, is also a symbol. To many it represents a certain ideal of American Freedom. To America’s first generation of leaders it was a symbolic link to the old (pagan) Roman Republic. Benjamin Franklin’s choice of national bird (the wild turkey) might not have won the day, but I’d argue that the turkey is our “other” national bird. As the Bald Eagle is celebrated on the Fourth of July (American Civil Religion’s most holy day), the turkey rules Thanksgiving as a symbol of abundance and as our national meal.

While having a great deal of respect and admiration for many of our national leaders and the documents and speeches that make up American Civil Religion, I am no fan of the institution. I love the symbolism of figures like Justice and Liberty, but the deification of words and men leads to a false sense of infallibility. America remains a great nation, but we also remain a nation capable of mistakes and a rigidness of thinking. The men who wrote the Constitution never thought that their words would be taken as holy writ. They were politicians and not prophets; men with flaws and limitations just like the rest of us. I think their humanity makes them more compelling and is worth remembering.

May you celebrate a safe and meaningful Fourth of July.

*Sadly we’ve turned far more men into demi-gods over the last two hundred and thirty odd years, but there are also several women who have also reached that exalted status. Betsy Ross, Susan B. Anthony, and Sakakawea (Sacagawea) are all examples of women who have come to be seen as nearly divine figures in American Civil Religion.

June 26, 2013
Deconstructing Stupid: Dumb Responses to the End of DOMA
Next Post 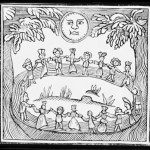 July 5, 2013 Shouldn't Rituals Be Entertaining?
Recent Comments
0 | Leave a Comment
"Interesting. Too much Greek for me [I know very little Greek lol] 1 little point, ..."
Nekoshema More Witchcraft & Pagan Trivia
"I have all 4 of the Campanelli's books that you mentioned. I don't even remember ..."
Karantha Rewriting Witchcraft & Overlooked Authors
"Re: #32, that fictional book is the Necronomicon; you missed a syllable."
Doug Edwards More Witchcraft & Pagan Trivia
"Castañeda invented the character of don Juan, but he was getting his information from Yaqui ..."
Michel America’s Most Important Occultist(s)
Browse Our Archives
get the latest updates from
Raise the Horns
and the Patheos
Pagan
Channel
POPULAR AT PATHEOS Pagan
1

Passions of the heart
Divination is the practice of reading passions.
view all Pagan blogs
What Are Your Thoughts?leave a comment
Copyright 2008-2021, Patheos. All rights reserved.