Ramble On: Call of the Wild 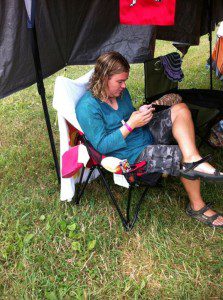 This Monday I’m flying out East for the Sirius Rising and Summerfest gatherings at Brushwood Folklore Center. I’ve been going to Brushwood for over ten years now for Sirius Rising, Starwood (now at Wisteria), and other assorted gatherings. Many festival goers use the phrase “going home” to describe the Pagan gathering experience. That’s probably a step too far for me (I can’t bring my cats with me to Brushwood), but it is like a homecoming. Old friends are a part of my day to day life again (at least for a week or two), and I can sink back into old habits and rhythms that only exist when I’m camping at a Pagan festival.

I have really enjoyed Northern California Pagandon, but the one thing it seems incapable of creating (or perhaps sustaining) is the large outdoor festival experience. The Midwest, East Coast, Eastern Canada, even parts of the South (I’m looking at you Pagan Unity Festival, and as a former Tennessean I desperately want you to invite me to your festival one day) all have large, reasonably priced gatherings in the out of doors. With land at a premium in California it’s hard to find a space big enough for 500 folks at a reasonable price point. There are things like Witchcamp out here, but with a starting registration fee of 600 dollars (or more, depending on when you sign-up) that’s always going to have a limited appeal, besides it’s more of an intensive than a festival.

I love indoor festivals, and I’m a huge believer in steaming-hot showers and beds, but there’s something about an outdoor festival that brings out the goatier side of me. I was trying to explain outdoor festivals to a friend the other day and failed miserably. Workshops, drum circles under the stars, bonfires, rituals, nightly live music, random wanderings and dalliances . . . either you like those things or you don’t. I don’t think any of those things need flowery descriptions, if they don’t already appeal to you they probably never will. 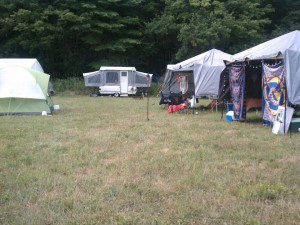 You can certainly do most of those things at an indoor festival, but sometimes those experiences seem hermetically sealed. You are certainly surrounded by fellow like-minded folks, but you are also surrounded by carpet, hotel staff, electric lighting, and walls for the sounds of the drums to bounce off of. There’s a freedom that comes with being able to prance around on acres of private property free of clothes and outside intrusion.

A sense of community, drumming to lull me to sleep,* in my case morning ciders (they are made out of fruit) . . . . . it’s generally what I’ve always imagined the Pagan Experience to be. Last summer I went on an extensive festival/bookstore tour (I was away from home for over a month) and wrote a lot about Pagan Festivaling (I especially liked my article on festivals as recreation), but those posts weren’t widely read, and probably because the Festival Experience only involves a tiny number of Modern Pagans. Sirius Rising was 1500 people or so last year, a large number, but only a fraction of Pagandom. Other festivals grab anywhere from a few hundred to over a thousand folks, but it’s still the minority who are drawn to festivals (and many festivals share attendees). I think of it as a vital part of my spirituality, but festivals don’t even make a lot of people’s radar screens. 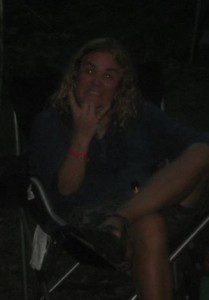 There are a few things about the outdoor experience that cause me some regrets. Brushwood is in a rural area and I sometimes feel like a poor environmental steward because recycling is difficult. (The campground its self doesn’t recycle because I don’t think the county does and it’s extremely cost prohibitive. Brushwood does a whole host of environmentally friendly things, but recycling is out of their control.) I also sometimes find myself forced to shop at places like Wal-Mart, businesses I’d never enter back home (when you fly in for a festival picking up a cooler and a camp-chair is a must) for a variety of reasons. (No judging here, you can shop where you want, and it’s not a discussion I’m in the mood to participate in.)

In addition to simply getting to be a Pagan for two weeks, I also get to be my chatty-Horned-God-and-history-obsessed-self with the real kicker being that people actually show up to listen to me. I’ll be doing workshops on the Horned God, Pagan and Occult History, and my 1899 Ritual over the next two weeks, plus I’ll be selling a few books so I can afford to eat. It’s going to be great, and I so love presenting workshops and rambling on about Pagan things.

While I plan to be away from an internet connected computer the next two weeks, I do have a lot of stuff planned for Raise the Horns while I’m gone. I’ve been crafting some extra content to share during the sabbatical and a lot of it is pretty awesome (if I do say so myself). It’s time to renew the Pagan batteries, baaaaaa under the moon (I’m a goatboy, I don’t howl like a wolf), and to find a whole host of new things to write about for the next six months. Thanks for reading and I’ll see you in a couple of weeks.

Pictures:
1. Tevas, cargo shorts, a tunic-like shirt . . .that’s pretty much my festival uniform.
2. Last year’s campsite at Sirius, early in the week before the hoards arrived.
3. Apparently that’s me possessed by something.

*There are lots of festival goers whose lives revolve around nightly drum circles, so much so that it almost feels like a separate festival culture. Since the drumming really doesn’t get going until midnight or so it’s a late, late, night group of people. The drums are usually just ending when I wake up. 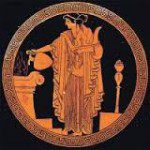 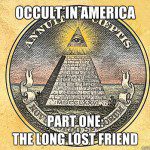 July 15, 2013 Magick & The Occult in America: The Long Lost Friend
Recent Comments
0 | Leave a Comment
Browse Our Archives
get the latest from
Raise the Horns
Sign up for our newsletter
POPULAR AT PATHEOS Pagan
1