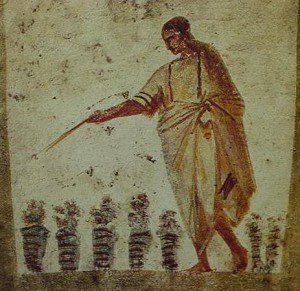 In many ways Christianity and Paganism are inter-twined. They’ve existed along-side each other for nearly 2000 years and often share a language and culture. I often lament Modern Paganism’s obsession with belittling Christianity but I understand it too. We live in the shadow of our much bigger cousin, and might only exist because he began to falter and was unable to maintain his monopoly.

Christianity emerged amongst pagans and most of its early converts were pagans. Once Christianity rose to prominence in the Roman Empire (and later Europe as a whole) it actively worked not just to suppress those paganisms it grew up with, but to actively destroy them. There were pagans of old who disliked Christianity, and there were even sporadic and half-hearted attempts to persecute the followers of Jesus, but never a systematic effort to eradicate Christians, it just didn’t happen. (1)

Strangely though, even as Christians attempted to destroy ancient paganisms they also found that they couldn’t quite quit those very same paganisms. Pagan holidays became Christian feast days. When a form of folk magic was found useful it survived, though sometimes modified to fit the new context. The story of Jesus and the letters of Paul were all written in Greek, a pagan language, which meant Greco-Roman (pagan) ideas were put it into its texts, ideas that the Jewish Jesus would have never agreed with. For nearly 1,500 years Christianity was also essentially polytheistic. People experienced the divine through the mysteries of the saints, and there were hundreds of them, both male and female. In some places the differences between pagan and “Christian” faiths were nearly nonexistent. New names replaced those of the ancient gods, but life remained much as it had before. (2) 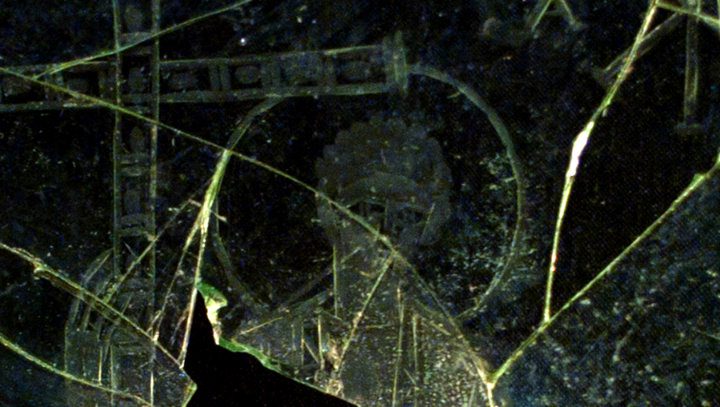 Eventually Christianity changed again, pulled forward (or backward depending on your point of view) by the Reformation that began with Martin Luther. The Christianity that emerged in the wake of that shake-up was far less pagan, but something else happened at the same time. Just as Christianity started to become more monotheistic the gods of pagan antiquity began to return. True, not everyone was worshipping them quite yet, but they began to exist again in stories and art. They were once more a part of society, and those that were passionate about them probably worshipped them, even if that’s not the title they gave their veneration. (3)

What follows are some generalized thoughts on how Christianity and Paganism have co-existed over the last 2000 years. 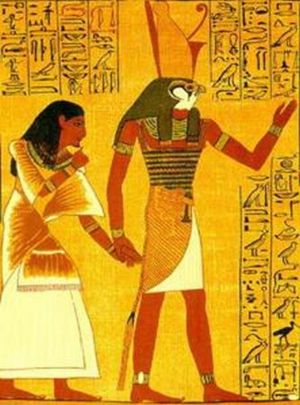 The Birth of Christianity and the Decline of Ancient Paganisms

There was no “one paganism” during the formative years of Christianity. Instead there were various kinds of paganisms percolating throughout the Roman Empire. “Exotic” cults, such as those of Isis, Mithra, and the Magna Mater were popular. At the same time the deities of the old Greco-Roman pantheon(s) still held sway as well. If we think our Paganism today is diverse, it was probably even more so during the First, Second, and Third Centuries of the Common Era. Philosophical ponderings on the very nature of the gods were common and ancient pagans formulated ideas that we might call Neo-Platonism and even monotheism today.

Christianity grew up in this vast cauldron of religiosity, absorbing some ideas and discarding others. I don’t believe Jesus was “created” to be a “dying and resurrecting god” along the lines of Dionysus or Osiris, but the myth of the man was certainly influenced by the Roman Empire’s many pagan gods. Later ideas about Jesus’s mother Mary would be influenced by pagan goddesses, as would many Christian “saints.” Some have even argued that the very structure of the Catholic Church was influenced by the rites of Mithra. Christianity is no more a “pagan religion” than Wicca is a Christian one, but it was certainly influenced by the faiths it grew up alongside of.

One influence that Christianity did not pick up from ancient paganisms was a spirit of tolerance. Christianity actively sought to destroy pagan faiths, and succeeded to some degree. The church did stamp out a great many paganisms while absorbing many of their best features at the same time. 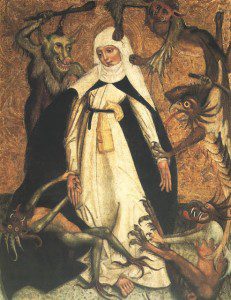 Christianity during the Middle Ages was not a bastion of monotheism, and many Christians today probably wouldn’t even recognize it. It was a hybrid of what was (pagan faiths) and what Christianity would later become. Multiple deities were replaced by numerous saints of both genders. Mary emerged as a true “Goddess” figure in her own rite, and many of the old pagan feast days continued to exist in varied forms. Often times the liturgy of Christianity resembled the somewhat monotheistic religion it wanted to be, but in practice was something else entirely.

The gods of paganism went underground (or changed their names and vestments) but in many places worship continued much as it had before. Magical practices remained, and the temples of the old faiths sometimes became the churches of the new. Christianity and practices we’d probably think of as “pagan” intermingled a great deal during the Middle Ages, even as some looked on disapprovingly.

Many of the seasonal observances we attribute to ancient paganisms were born during this period of time. Many of the traditions we associate with a holiday like Lughnasadh come from this pagan-Christian era of Europe. Lip-service was paid to Christian names, but holidays most likely looked and felt pagan. Magical practices and ideas from this period of time have shown up in many of my rituals over the years.

One of the most extraordinary things about the Italian Renaissance was the re-emergence of pagan deities. I don’t want to overstate the power of the Greco-Roman deities during the Renaissance, but it’s hard for me not to. The Middle Ages were not as intellectually dead as many have made them out to be, but the Renaissance gave birth to a renewed interest in art, literature, culture, and science. At the same time all of those wonderful things were happening “the gods” were becoming popular symbols once more. People may not have been worshipping them in name, but they very well might have been worshipping them in deed.

As images of the gods became popular and acceptable once again, Christianity finally became Christianity (there’s often a dash of bad with the good). Much of its more pagan ideology and practice was finally set aside, and a “Christian worship” that most of us would recognize today began to emerge. Saints were still venerated, and Mary retained her goddess-hood (at least in some traditions), but Christianity was no longer paganism with Biblical names inserted into the spaces we would expect to see Hecate and Hermes in.

It was during the European Renaissance and not “the Dark Ages” that “witch burnings” reached their peak. One could paint pictures of pagan gods again, but worship of anything outside of Jesus, the saints, Dad, and Mary was still out of the question. Christianity was certainly at its worst in the centuries during and immediately after the Renaissance, and there are some in today’s world who refuse to leave that version of Christianity behind. Progress is sometimes exceedingly slow, but eventually the influence of the gods reawakened during the Renaissance would pave the way for a more scientific and rational Europe. Eventually that set the stage for the emergence of Modern Paganism in the Nineteenth and Twentieth Centuries. 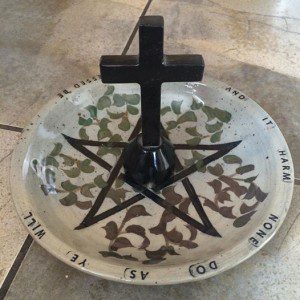 We live in a modern world that has been shaped by Christianity for both good and for ill over the last 650 years. As a result Christianity has helped shape the development of Modern Paganism. Traditions like Wicca were directly influenced by generally Christian groups like the Freemasons, and many of our ritual structures are re-workings of Christian Ceremonial magick (which had been influenced by pagan magick prior). If you are calling “The Watchtowers” into ritual you are tapping into a current of angel magick that has been popular in ceremonial magick since the Middle Ages.

Sometimes the influences of Christianity on Modern Paganism are subtle, other times more direct. In a few weeks there will be a Christmas Tree in my living room. Sure it’s a tradition that might have pagan echoes, but it’s a practice popularized in the English speaking world by Christians. It’s probably not in my living room if Queen Victoria had been offended by it 150 years ago.

I’m not arguing that Paganism is Christian (far from it) but nothing exists in a vacuum. Most of us have friends, family, and neighbors who are Christians. Of course that’s going to be an influence! Pagan groups attempting to organize as churches or temples is most likely a direct result of how Christians organize themselves. That’s not a bad thing, just a thing. Even our gods are sometimes influenced by Christianity. James Frazer’s dying and resurrecting god was a deliberate attempt to find parallels between Jesus and ancient paganisms. As a result of Frazer’s work there’s a new male-deity archetype anchoring many myths that revolved around The Wheel of the Year.

Modern Paganism has grown up in the shadow of Christianity, we are linked with it whether we wish to be or not. But Christians are forever linked to paganisms past, present, and future too. Their holidays are often our holidays, and even now Christianity is being influenced by Modern Paganism. More tolerant and progressive strains of Christianity are finally embracing the religious openness of ancient paganisms. Due to circumstances ancient and modern, Paganism and Christianity will forever be linked in some way. Here’s hoping we can find ways to celebrate our differences and live happily side by side.

1. Candida Moss’s The Myth of Persecution: How Early Christians Invented a Story of Martyrdom is a thorough debunking of the “Christian martyr” myth. Pagans weren’t really throwing Christians to the lions, unless of course the Christians in question offered us little choice. (Seriously, there were just a lot of folks looking to be martyred.)

2. Ronald Hutton’s Pagan Britain contains a lovely few pages detailing the synthesis of pagan and Christian during the English Middle Ages. I reference it extensively in the linked to article Lammas: First Fruits & A Sort of Christian Feast.

3. Joscelyn Godwin is one of Pagandom’s most overlooked scholars. His The Pagan Dream of the Renaissance is a lovely and captivating look at the re-emergence of the pagan gods during the Italian Renaissance.

4. Not really referenced in this article but I’m sure my completion of this piece over the last 24 hours (I started writing this last March in response to something) is somehow connected to my recent reading of A Million and One Gods: The Persistence of Polytheism by Page duBois. 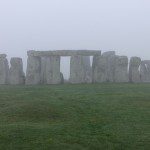 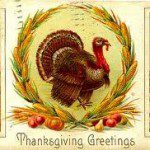 November 17, 2014 Killing Thanksgiving
Recent Comments
0 | Leave a Comment
Browse Our Archives
get the latest from
Raise the Horns
Sign up for our newsletter
POPULAR AT PATHEOS Pagan
1

Shadow Work and the Magic of...
The Balancing Path
Related posts from Raise the Horns