I love Samhain. I love Halloween. In many ways this is the best time of year to be a Witch, and even before embracing my inner-Pagan this was my favorite time of year. However, this time of year is also home to a lot of disinformation. What follows below are four myths I see repeated every Halloween-season that I’m just not comfortable repeating.

Halloween is a Pagan Holiday.

Holidays are complex things, and while many of them feel as if they were celebrated a certain way since time immemorial that’s just not quite the case, and Halloween is no exception. Certainly Samhain is a Pagan holiday both ancient and modern. The Irish-Celts celebrated Samhain 2000 years ago, but we really don’t know much about what they did (or didn’t) do. Certainly there were some supernatural overtones to the day, but there were no jack-o-lanterns or trick or treating. There probably weren’t even any real references to the “veil between the worlds” being thin. 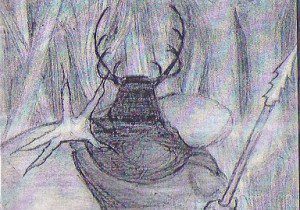 Modern Pagans and Witches have again been celebrating Samhain since at least the late 1940’s, and most likely earlier than that. Today’s Samhain is certainly a spiritual successor to what the Irish-Celts were doing thousands of years ago, but most of us are probably celebrating it quite a bit differently than those folks did. There’s no unbroken chain back to a “purer” Samhain-Halloween season, and we’ve really been making up a lot of it as we go along, and that’s fine. Holidays change and grow over time, and if they don’t, they tend to wither and die on the vine.

I feel pretty comfortable with the idea that today’s Halloween still has a bit of the ancient Samhain at its roots, but just a little. Nearly all of the customs we associate with the modern Halloween came centuries after Samhain faded into memory. Halloween is a hodgepodge of cultural influences: Christian, mundane, and ancient pagan. In the United States it also served as a dumping-ground for holiday traditions that didn’t quite fit in elsewhere (what, you don’t go trick or treating on Thanksgiving?).

Halloween has become a huge holiday because lots of different groups have contributed to its evolution over the centuries. It belongs to everyone. And don’t ask me to lament the “commercialization” of Halloween, without that commercialization it most likely wouldn’t be here today. Besides, what I do in my ritual room for Samhain is vastly different than my Halloween celebrations.

Halloween Candy is Full of Poison and Razorblades

There are few things more fun than trick or treating, and yet for the last forty-five years many well meaning idiots have been attempting to ruin what is a fine, and perfectly safe, tradition. There has never been a real case of “random treat-giver giving poisoned candy to trick or treaters,” and yet it feels as if there has. Every year there are stories on how to “check” treats, and there are still hospitals and police stations that will x-ray candy for especially nervous parents. (To be fair there have been a few instances of needles in candy, but such incidents are extremely rare and no one has ever died from such idiocy.)

Candy paranoia comes from a few different sources. The first is our stupid sensationalist media which often reports speculation as fact. Kid gets sick on Halloween? It’s most likely the result of poisoned candy. Over the last twenty years hundreds of trick or treats have been tossed into the garbage can as a result of such sensationalist reporting.

A child did actually die from poisoned candy one Halloween, but the child was murdered by his father, not a random stranger. I’ll let Snopes tell the story:

By far the most famous case of Halloween candy poisoning was the murder of eight-year-old Timothy Marc O’Bryan at the hands of his father, Ronald Clark O’Bryan, in Houston, Texas. The child died at 10 p.m. on 31 October 1974, as a result of eating cyanide-laced Pixie Stix acquired while trick-or-treating.

To make his act appear more like the work of a random madman, O’Bryan also gave poisoned Pixie Stix to his daughter and three other children. By a kind stroke of fate, none of the other children ate the candy.

The prosecution proved the father had purchased cyanide and had (along with a neighbor) accompanied the group of children on their door-to-door mission. None of the places visited that night were giving out Pixie Stix. Young Mark’s life was insured for a large sum of money, and collecting on this policy has always been pointed to as the motive behind this murder.

Though the case was circumstantial (no one saw the father poison the candy or slip the Pixie Stix into the boy’s bag), Ronald O’Bryan was convicted of the murder in May 1975. He received the death sentence and was executed by lethal injection on 31 March 1984 (not on the poetically-just 31 October as is often recounted in off-the-cuff retellings of the case).

Halloween is in many ways a victim of its own success. There are large segments of society that have just come to expect the worst on October 31 and will believe just about any thing. If people went trick or treating on Christmas instead of Halloween I doubt the urban legend of poisoned candy would be so prevalent.

It’s true that modern Day of the Dead celebrations evolved from traditions that some might consider pagan, but those traditions emerged from what is now central Mexico and not Ireland. Several Mesoamerican societies venerated their dead, and did such things as leave them food on family altars. The dead were seen as intermediaries between this world and the next and were honored accordingly. (1)

What Día de Muertos is not is Halloween. Halloween is a secular holiday, Día de Muertos is a religious and spiritual one. In Mexico people are also actively fighting against the intrusion of the Yankee Halloween. Some have gone so far as to call it “cultural pollution.” (2) Like Halloween, the Day of the Dead has a complex history and has been influenced by several different traditions. Like Halloween it can be linked to some All Saints Day imagery, but that does make it the same holiday.

Let me start by confessing something, I own a black cat. She’s a wonderful little creature and I would never let any harm come to her. That being said, the chances of anything bad happening to her this Halloween season is about 0%. Despite the memes on Facebook and the anxious fretting by other well meaning cat lovers, the idea that black cats are often sacrificed on Halloween is more urban myth than reality.

Many animal shelters halt cat adoptions in late October, and most specifically the adoption of black cats. This is generally done for what people consider the best of reasons, but there’s very little evidence to suggest that cats are being slaughtered and tortured with any frequency. Yes, there have been a few isolated incidents here and there, such as a crucified black cat in Iowa back in 2004, but those are exceptions to the rule. The truth of the matter is that assholes can be assholes any time of year.

So when did the black cat sacrifice idea start? Most likely in the unhinged rantings of deluded Evangelicals beginning in the 1970’s, and then peaking with the Satanic Panic of the mid-1980’s (which I would argue ran all the way into the early 90’s). While all the anti-Witch and Satanic bullshit of that period was proven to be false (no one was kidnapping children in the name of Satan) it still has a wide audience and has found new supporters in the age of internet-disinformation.

So feel free to eat as much candy as you want and invite everyone to your Halloween party. And hug your black kittie, not because she’s in any danger, but just because she’s awesome!

1. I’m super indebted to Nicholas Rogers’ Halloween From Pagan Ritual to Party Night for the information on Day of the Dead celebrations. I own the 2002 Oxford University Press edition. I used information on page 143.

One more note: Longtime readers might note that I’ve got a different commenting system below. It’s called World Table, and it’s attempt to limit spam and trolls. I feel that all of you who leave me notes and comments (good and bad) are an integral part of the conversation and I want that conversation to go as smoothly as possible. Besides, Disqus takes forever to load sometimes. 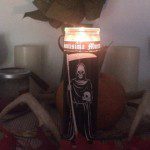 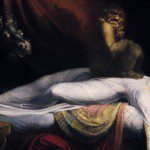 October 23, 2015 All Things Samhain & Halloween (Histories, Rituals, and More!)
Recent Comments
0 | Leave a Comment
"If you are not an initiate, you don't have the resources needed to understand, or ..."
Craig Schumacher Have We De-Mystified Wicca?
"LOVE your take on this! As an aside: I saw that you mentioned dressing up ..."
H. Karena Bad Witch: My Untraditional Samhain Practices
"the bigger question is are christian witches trying to destroy Paganism from the inside. You ..."
Brianna LaPoint Why Can’t There Be Christian Witches?
"World views in collision."
Pitch313 Paganism Post Trump
Browse Our Archives
get the latest from
Raise the Horns
Sign up for our newsletter
POPULAR AT PATHEOS Pagan
1

A Collection of 12 Sigils for...
A Modern Traditional Witch
Related posts from Raise the Horns