No Absolutes: The Things I Don’t Know About Deity

(I almost called this “Things That Will Piss People Off” though that is far from my intention. This comes from an honest place.)

There are times when it’s completely fine to speak in absolutes. The world is round is an absolute. Even before we could take pictures of it from space, people knew the world was round. It’s something that could be argued against I suppose, but it would be a rather stupid argument.

When it comes to deity I try to avoid writing and even thinking about it in absolutes. To put it simply, when it comes to the nature of deity, I just don’t know. I’m sure that when I present a ritual I sometimes speak in absolutes because that’s generally the type of language that ritual calls for. When I describe my relationships with Pan or Dionysus I’m sure I speak of them in a way that sounds like I have the keys to the universe (or at least the shed of immortality). Deep down I know that I don’t have the keys to the shed, all I have are my experiences, and I can share them, but I can’t use them to dictate how someone else should feel or even know if what I perceive is correct.

Before getting started I think it’s important to point out that most people don’t give two shits about the nature of deity. That sounds rather harsh, and it’s also crude, but it’s a point I want to drive home. In the Pagan Blogosphere we love to argue about theology and how deity works and how one side is louder than the other. The vast majority of Pagans, removed from the arguments in our little world, simply carry on.

People do what works. People cultivate the relationships with the divine that work for them. There are people who prefer to call upon “The Goddess” and “The God” during ritual who feel close to those ideas, find comfort in it, and then take it into their own lives. Perhaps during ritual “The God” is called by several what we might think of as specific names and yet remains “The God” in that rite. Is this bad? Is this good? That doesn’t matter as much as did it work? If the answer is yes, it’s possible that not a second thought went into what unfolded.

The problem that comes up when most of us write about deity is that we have specific ideas about it. Ideas that are born out of experiences, research, and probably several other factors I’m forgetting right now. So when we write about deity, no matter how hard we try, those ideas and experiences are going to come through. Is someone a “hard polytheist?” That’s probably going to come out in whatever they write, and it’s probably going to be hard to hide. The reverse is true too when it comes to “Atheo-Pagans” (Humanistic? how many terms do I need these days?) too. If someone doesn’t believe in a sentient higher power that tends to become evident. Even the nicest most inclusive person is sometimes going to sound less than that when writing about deity because it’s nearly impossible to write about deity and completely separate ourselves from however we feel about it.

People who have an opinion tend to yell the loudest in a conversation, and I think that’s true in the ongoing arguments over deity-isms. The end result is that both extremes of the spectrum feel they are being mistreated, overlooked, and/or disrespected. I would find this quite humorous if I thought anyone would laugh alongside of me.

I have a sneaking suspicion that believers in deity far outnumber non-theists amongst Pagans, but at the same time I find it likely that most “believers” aren’t hard polytheists either. There’s a mushy middle in there that no one really explores or even acknowledges existing. I’ve always considered myself a polytheist, but many of the loudest voices in polytheism only accept a hard polytheism as being authentic or real. I’ve come across people angry at me that I’ve speculated on the histories of specific deities and others who find my rituals a tad bit too pious towards figures (to me deities) that they don’t believe exist. There is no winning on the edges, though the vast majority of the middle seems fine with both forms of expression.

My more muddled approach to deity does not sit well with some polytheists, and there are some on the non-theist side who scoff at anything less than no belief in deity at all. I have favorite Pagans on both sides of the chasm and often find wisdom and insight in both perspectives. Personally I don’t care what either side believes as long as they allow me my own space. 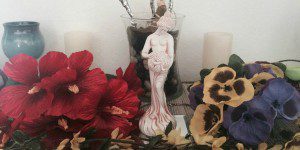 From my own experience I’m rather sure that Pan is not Cernunnos but I don’t think he (Pan) lives alone on an island (or in a cave!) either, unless of course he does. I don’t know, and won’t presume to tell you that he is or is not also Faunus, because I don’t know. No one really does, in my opinion, (which could be wrong) though some like to think that they do.

I know from my own experiences that I’ve had moments with goddesses and gods. Those moments have often been varied and I believe in the reality of my encounters with Pan, Dionysus, and Aphrodite. However I would never presume to tell someone what lies behind that experience. I have that moment, I have the insights it provided me, but it probably will never unlock the secrets to the universe.

I’ve never run across an argument from a hard polytheist that couldn’t be twisted around to fit with my more Neo-Platonist version of the universe. I’ve also never come across a compelling argument for a life devoid of magic or drawing down the moon. I am glad that most everyone I know in the Pagan Community finds awe and majesty in the natural world, that I think is something we can all agree with absolutely.

December 7, 2015
Taking Back Pagan Things: A Yule Ritual
Next Post 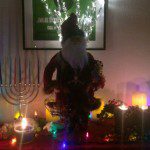 December 14, 2015 Things I Hate About the Holidays
Recent Comments
0 | Leave a Comment
Browse Our Archives
Follow Us!