Not everyone loves Led Zeppelin, and I know a few people who have trouble accepting the absolute genius of Stevie Wonder. There are even a few people out there who don’t like the band Queen, but everyone loves David Bowie. I don’t think there’s even been a musical and cultural force equal to that of Bowie. Love of Bowie transcends age and genre, and people can adore him for a variety of reasons. Punk kids love Bowie and the runways of Milan love Bowie.

I don’t usually cry when celebrities pass away, but today was different. This was David Bowie, one of the immortals. His face has been firmly on rock and roll’s Mount Rushmore since the mid-70’s and will stay there for eternity. This is a dark day in rock history.

What makes Bowie’s passing even harder for me as a magickal person is that he was one of us. I’m not saying that he was a secret Witch or the first rock and roll Pagan, but magick was most certainly a part of his music and worldview. In a lot of ways 70’s Bowie perfectly encapsulates the occult experience of that era. Back then anything outside of the mainstream all coalesced under one roof. Read a 70’s paperback on the occult and you’ll find Satanism, Witchcraft, Ceremonial Magick, UFO’s, and various New Age ideas all lumped together and often times quite comfortably. Bowie had his beautiful fingers in all of it, which is why something like The Rise and Fall of Ziggy Stardust and the Spiders from Mars is both a visionary space opera and an occult masterpiece.

Though Bowie was clearly interested in everything, he was never someone to throw around occult references needlessly. Does he sing “Here are we one magical movement from Kether to Malkuth” in Station to Station? Sure, but Bowie’s occult truth was about constant reinvention. Like all the truly great magicians Bowie was capable of being anything and everything. He was Ziggy Stardust and the Thin White Duke and the king of 80’s New Wave Pop (Modern Love, China Girl, Let’s Dance). He was also the Goblin King and Nikola Tesla to such an extent that you can’t even imagine anyone else being those things.

If Neo-Paganism is best summed up in the Wheel of the Year, that constant cycle of life, death, and rebirth, then David Bowie is the quintessential Neo-Pagan artist. No artist (with the possible exception of Freddie Mercury) was ever more apt at life, death, and rebirth in a musical context. Bowie went from teen pop star to glam rocker to explorer of the Outer Reaches, to out stoning the Rolling Stones on Diamond Dogs. He was an avant-garde song-writer and one of pop music’s finest craftsmen. And when he was done with that he burnt it all down with Tin Machine and started all over again. Bowie even became an unlikely Christmas standard bearer thanks to his duet on The Little Drummer Boy with Bing Crosby, a rather surreal rock and roll moment that could only be staged by Bowie.

“This is our last dance, this is our song, under pressure.” I’m not ashamed of my tears right now, but I’m not sure I can write anything more (and there is still so much that needs to be said). David Bowie was (and remains) one of all the time greats. Birth-Death-Rebirth-David Bowie. 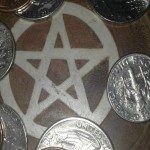 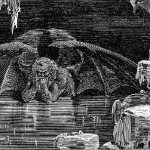 January 14, 2016 They Are Satanic: On Ted Cruz, Outrage, & The End Times
Recent Comments
0 | Leave a Comment
"I can completely see Dionysus and/or Loki doing this."
Katherine Devonshire A Tale of Dionysus
"My bf and I run a podcast called The Christian and the Witch where we ..."
The Christian + the Witch Podc That’s Not Our Paganism (And You ..."
"I'll be the judge of my final destination, thank you very much, and if I ..."
Andy Blake Witch, You Vex Me
"You're right, Mark. I don't remember what motivated that response at the time, but I ..."
Craig Schumacher Of Course We Like Sex
Browse Our Archives
get the latest from
Raise the Horns
Sign up for our newsletter
POPULAR AT PATHEOS Pagan
1