I live Paganism in a way that few other people get to. I’m the caretaker of Patheos Pagan, I travel to lots of Pagan events every year, I blog here, and I’ve started to write books. Much of my leisure time is spent reading texts on magickal and occult history for research purposes (and because I just like reading that sort of stuff!). In my spare time I help run a local (open) Pagan group, and currently practice with two covens. I do a lot of Pagan shit in the course of a week, but with the exception of the coven work, a lot of it is Armchair Paganism.

When I was a Witchling I used to read a Pagan and/or Witchcraft book for at least 30 minutes a night before going to sleep. I felt rather smug about this too, because I thought that by doing so I was dedicating at least that amount of time to the Craft on a daily basis. During that period of time I settled down with Scott Cunningham’s Living Wicca (the less well known sequel to Wicca: A Guide For the Solitary Practitioner), and Cunningham’s words in that book served as a wake-up for my own practice. I don’t remember exactly what was written in that book but it was something like “you should practice the Craft everyday (and reading books about the Craft doesn’t count).” It was like a slap in the face, but a welcome one.

Pagan faiths are generally about what we do, and not what we think. I practice Wiccan-Witchcraft not because I like reading about it, but because it’s what I do. My faith doesn’t live in books, it lives in the magick circle, in the natural world, and truly comes to life when I call to the Watchtowers and invoke deity. Books have helped me get to the point of casting a circle and calling to the Lord and Lady, but they aren’t doing.

Over the years I’ve practiced a lot of Armchair Paganism. There have been times when the only rituals I participated in were at festivals, and away from those festivals I pretty much ignored my deities. There were no covens or even solitary practice during those times, just a few scattered rites that were more about an extended community than growing my practice. I’m not going to beat myself up about it today (what’s done is done) and we all go through dry spells, but looking back on it there was a lot of wasted time in there.

The Blogosphere is Not Paganism

It feels like I’m shooting myself in the foot here, but the Pagan blogosphere is not Paganism. It’s a giant organism about Paganism, and can help facilitate the doing of actual Paganism, but it’s not Paganism. I naturally think blogs have value and contribute to our community, but they also take us away from the natural world and time better spent communing with deity, nature, and the energies that give our lives meaning.

If you find yourself more worried about what’s being said in the blogosphere than your own personal practice you are probably spending too much time engaged in Armchair Paganism. It’s an easy thing to get sucked into, no doubt about that, and it happens to me just as much as it happens to anyone else. Passionately caring about one’s ideas is great, but spending hours a day defending those ideas is not the same as putting them into practice. I get a lot done at this keyboard, but very little actual magick happens here.

When my writing opens up a door that leads to more doing, then I think I’ve accomplished something in this space. I don’t feel that way when a post generates an 80 comment backlash. It might surprise people to know that the most read things on this blog are generally my rituals, holiday histories, and articles on individual deities. I’m proud of that because those are the types of articles that lead to practice.

Writing Rituals is Important, But Not as Important as Doing Them

A couple of weeks ago my coven got together for no particular reason. It wasn’t a sabbat, or a full moon, it was simply a Friday night and we hadn’t had a ritual in awhile. All day I had sort of meant to write a ritual for the evening and never got around to it (hockey playoffs are kind of distracting right now) and once everyone arrived I guiltily admitted that I had chosen to watch tv instead of working on something for the coven.

But there was no reason to feel guilty, because once we got into ritual space everything was great! We generally use the same set-up in ritual every time we meet so a lot of the ritual was done before we even got into the room, but the purpose of Witchcraft is not to simply recite flowery words, it’s about raising energy and directing it towards certain things, and we don’t need a script for that.

Ritual writing is not inconsequential, and certainly public rites are worth a bit of pre-planning, but how much time should we really be spending on these things? The Lord and Lady do not care if my calls to them are perfectly rhymed or not (though I’d argue that they like to be flattered), that’s a personal choice. I don’t need a fully formed ritual to practice Witchcraft, what I need is to get off my butt and into sacred space.

Sometimes We Worry Too Much About Theology

Don’t get me wrong, I like theology. I think it’s important to have a fairly clear picture of why you believe the way you do, but ultimately that picture is yours and yours alone. I once heard deity called “The Ultimate Mystery” and it’s a turn of phrase I highly value. We might know our own deities, but in the end, we don’t know everything, and probably never will. The nature of goddesses and gods is not something that can be written about in absolutes. Personal understandings on the nature of deity help us make sense of our own reality, but they don’t apply to everyone else.

I’ve read some wonderful articles defending the Neo-Platonist worldview, but I’ve also read some fine articles that make a strong case for polytheism. There are Pagans who argue for a more atheist-viewpoint, and some of their arguments are compelling. I believe what I believe, but I know that I can’t offer absolute proof that my interpretation of things is the proper one.

There’s value in sharing our ideas and experiences about deity, but I’m not sure there’s a whole lot to be gained by the circular “I’m right, you’re wrong” arguments that grow like weeds online. The time spent arguing could be spent much better communing with the deities and ideas we are arguing about! Whether or not Cernunnos is a stand-alone god or part of a greater whole doesn’t really change how I honor him. I find the personal gnosis of other Cernunnos-worshippers beneficial, but what’s beneficial about it are their experiences with Him, not so much the cosmology of it all.

And As Cunningham Pointed Out All Those Years Ago, Books Don’t Count

Yes this makes me sad too. I wish that reading about Pagan and magickal things counted as actual practice, but they generally don’t. Sure, sometimes I stop in the middle of a book and take a moment to feel the sacred powers around me, but I’m not reading while I’m doing that. Reading facilitates Paganism, but it’s not the same as practicing Paganism.

More so than any other bad habit associated with my personal practice it’s reading that gets me into trouble. I once thought that simply reading about Witchcraft was the equivalent of practicing Witchcraft and that assumption was completely wrong. I’ve only truly begun to understand my practice and tradition because it’s only been in the last five years that I’ve continually gotten out of the armchair and into the circle. There are no substitutes for daily, solitary, and coven practices, not even reading.

Don’t think for a second that I’m arguing that reading is a waste of time, it’s most certainly not! But it needs to be balanced with putting what we’ve read into practice. Words on a page (or screen) are just that if they aren’t being used in magick, ritual, and practice.

The only way to overcome Armchair Paganism is to do what you do. If you find power and majesty in the natural world then get out in the natural world, and that certainly includes short walks around the neighborhood or whatever catches your fantasy. Nature is more than waterfalls and forests, it’s always around us. And I’m of the opinion that our deities are always around us to, and to interact with them we just have to call their names and reach out a little bit. Practice doesn’t have to involve lots of tools or even a circle, all it requires is a little effort! 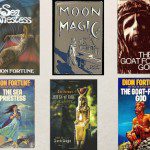 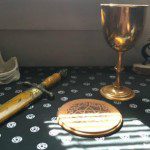 May 31, 2016 Building an Altar and Finding Ritual Tools
Recent Comments
0 | Leave a Comment
"I've been thinking a lot in these pandemic years about how I miss festivals, especially ..."
Virginia Brubaker Astonished & Influential Witches Yesterday & ..."
"I think it likely that two of these questions might combine into an answer. Namely...I ..."
BrigidsBlest Can We Lose Deities? Fuzzy Polytheism, ..."
"People often focus on the nature connection of the gods and goddesses, but they have ..."
WildestSea Can We Lose Deities? Fuzzy Polytheism, ..."
"If Mars is a dead planet, or if the life there is not hospitable to ..."
Gordon Cooper Can We Lose Deities? Fuzzy Polytheism, ..."
Browse Our Archives
get the latest updates from
Raise the Horns
and the Patheos
Pagan
Channel
POPULAR AT PATHEOS Pagan
1