Hillary Clinton as a Witch

Our society is currently in the middle of a “Witch-moment.” Witches are all over TV and the movies, and after the Jack-O-Lantern there is no other Halloween figure as popular as the witch. But the word is also coming up on in relation to Hillary Clinton and the race for the White House, and it’s being used in variety of different ways.

The word witch has many definitions. According to Merriam Webster the word witch can be defined in the following ways:

Full Definition of witch
1: one that is credited with usually malignant supernatural powers; especially : a woman practicing usually black witchcraft often with the aid of a devil or familiar : sorceress — compare warlock
2: an ugly old woman : hag
3: a charming or alluring girl or woman
4: a practitioner of Wicca

I think we can safely say that Hillary Clinton is not a practitioner of Wicca (she’s a Methodist), and while the other definitions here don’t really apply to her that hasn’t stopped some people from using them anyways. The majority of this is gender-related, Obama has been called a lot of things but I don’t think he was commonly thought of as a witch. For male Presidents the term Anti-Christ comes up a lot, and during my lifetime I’ve seen it applied to every President from Reagan to Obama. But witch is a new one, and it carries with it both good and bad connotations.

The most common witch figure in our society is that of the diabolical female magic user up to no good. She’s often thought of as being in league with the Devil, that these sorts of wild accusations have been thrown at Hillary Clinton is not much of a surprise. There’s a certain segment of the Christian Right that loves to spout such nonsense, but due to the rise of social media and the ability of people to live in bubbles it’s not just confined to the fringes of the election. Alex Jones is an ignorant conspiracy-obsessed troll, but Donald Trump has also called into his radio show. This is all rather unprecedented, and Alex Jones thinks Hillary is a demon, tapping into many people’s ideas of the witch:

” I’m never a lesser of two evils person, but with Hillary, there’s not even the same universe. She is an abject, psychopathic, demon from Hell that as soon as she gets into power is going to try to destroy the planet. I’m sure of that, and people around her say she’s so dark now, and so evil, and so possessed that they are having nightmares, they’re freaking out.”

Clinton being linked to demonic forces isn’t limited to just Jones and his followers at Infowars, Julian Assange of WikiLeaks used similar language back in September:

“The American liberal media is falling over themselves to defend Hillary Clinton,” he told The New York Times during a Facebook video interview Wednesday.

“[They are] erecting a demon who is going to put nooses around everyone’s necks as soon as she wins this election, which she is almost certainly going to do.”

Hillary as the stereotype of a “hag” is almost impossible to escape. It doesn’t take much more than a visit to a Trump rally to see and hear Clinton being referenced in such a way. (I’d also argue that the “lack of stamina” comments and “Hillary is sick” memes also play into the idea.) A Trump supporter from Maine even went so far as to use the very word hag:

“She comes across as an angry, crotchety old hag who is just out for power, who just wants to be able to line her pockets.”

But Hillary as a witch-like-hag extends beyond Trump supporters to the Trump campaign its self. Of course no campaign is going to use a flattering photo of an opponent, but Trump photos of Clinton seem to tap directly into the witch archetype. The image below has been in several Trump ads and you can almost hear Hillary cackle in it. I found it so provacative that I paused my television and felt compelled to take a picture of it.

Clinton has also been called a witch several times, often because it rhymes with another word. I realize that Rush Limbaugh is low-hanging fruit but I doubt he’s alone in his sentiments. Here’s what he said after the first Presidential debate on his radio show:

“She is safe Hillary. She is queen Hillary, on the way to being coronated. The continual smug, that self-satisfied smirk that she had on her face for the last 45 minutes, that’s when she thought, this guy’s making a fool of himself, I’m winning this. Major blunder. The two main things that I think ordinary people saw, Trump demonstrated his earned position as a major party nominee. He had every business, every right being up there, and a lot of people were applauding what he was saying up there last night. And Hillary, she came off exactly as many people see her: a witch with a capital B.”

A recent comment in a Breitbart article both winked at the rhyming of witch/bitch and linked Clinton to occult forces. It was sort of the grand-slam of Hillary & Witchcraft articles:

“They call her a ‘bruja,’ basically,” Arias said is what his friends and neighbors think of Hillary Clinton. “She’s the bruja mentirosa. Which means liar. She’s a lying witch basically. We all know what rhymes with witch, though we’re not going to get into that. She is typically viewed as a liar and dishonest and in it for herself, a typical career politician that doesn’t care about the interests of the Cuban community—and doesn’t care about the interests of Americans in general. She’s mostly in it for her people and her foundation.”

Away from the Trump campaign there have been other uses of the word witch in connection with Clinton. The most common on the left is that she’s often been the victim of a witch-hunt. In these instances the word witch is being used sympathetically, and its use is not too far from the truth. Hillary Clinton is the most thoroughly researched and investigated Presidential candidate in history. Nearly every decision she’s made over the last thirty years has been questioned and investigated by her detractors. Clinton has certainly made some mistakes, but the level of scrutiny those mistakes have undergone is unprecedented in American politics.

The events at the American embassy in Benghazi Libya were a tragedy, not a criminal case. That hasn’t stopped Congress from investigating it eight times now, all while spending millions of dollars in the process. That all it’s turned up are a couple of emails is to me the very definition of a witch hunt. There are legitimate reasons to disagree with Hillary Clinton on matters of policy, it’s something else to dislike her because of nonsense conspiracy theories.

Though it’s not a part of the Merriam-Webster dictionary definition of the word witch, there’s another way the word is used: as a title of female empowerment. This began in the late Nineteenth Century and has continued into the present day. Women who stand up against our male dominated society are often labeled witches, and to many of us this is a good thing. Witches are strong, witches can be healers, and witches often upend the social order.

I have friends on both sides of the political spectrum who dislike Hillary Clinton, but she is most certainly strong. No candidate in the modern history of elected politics has had more mud thrown at them than Hillary Clinton. “Mud” doesn’t even begin to describe the outrageous things said about her, and yet she’s managed to rise above it to become the first female Presidential nominee of a major party. I don’t think Clinton can heal the deep divisions in this country, but she’s (at the very least) a steady hand and will not plunge the United States and possibly the world into chaos.

And make no mistake Hillary Clinton has rattled the cages and already changed the United States for the better. Never again will anyone wonder if a woman can be President, Hillary has almost brought down at least one glass ceiling with many more to go. Whether you like her or not she’s a transformative candidate, and witches most certainly transform and change the things they touch. 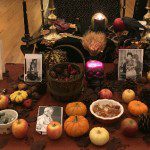 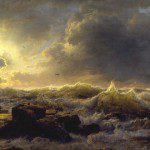 November 9, 2016 The Republic Will Survive, I'm Not Sure About My Friends
Recent Comments
0 | Leave a Comment
"Re: #32, that fictional book is the Necronomicon; you missed a syllable."
Doug Edwards More Witchcraft & Pagan Trivia
"Castañeda invented the character of don Juan, but he was getting his information from Yaqui ..."
Michel America’s Most Important Occultist(s)
"Than isnt the correct Welsh pronunciation. its more like 'Mabb - on', with short syllables. ..."
linguliformean Mabon: The Most Pressing Issue of ..."
"Oh my goddess your article had me laughing out loud, I really never gave much ..."
Deb Lee Mabon: The Most Pressing Issue of ..."
Browse Our Archives
get the latest updates from
Raise the Horns
and the Patheos
Pagan
Channel
POPULAR AT PATHEOS Pagan
1