Modern Witchcraft is sometimes referred to as a religion of the books, and even if that’s an overstatement, there’s no denying that the magickal community likes to read. The popularity of Paganism (and by extension Modern Witchcraft and Wicca) is due in large part to books. Until recently it could be difficult to meet other magickal folk, but by the 1960’s books on magick, the occult, and even Witchcraft were generally easily available at bookstores and local libraries.

But even before the modern occult revival, books played an important role in the spreading of magickal information. Contrary to what a lot of people believe, many cunning-folk were literate and used magickal books much like we do today. They purchased spell books and put them to use, the popularity of cunning-craft and Conjure up until the early twentieth century was due in large part to the number of books available detailing the practice.

What follows are profiles of three magickal books that have influenced the modern practice of Witchcraft. One of them did so by inadvertently becoming the first grimoire in English, while the last two helped provide many Witch traditions with theology, a magickal system, and some of their most sacred rituals and liturgies. Some of the material here is from my book, The Witch’s Book of Shadows (published by Llewellyn in January of 2017), and some of it is material I wrote for that book which ended up on the cutting room floor.

This post is divided up into three pages primarily because of its length. This is a 4000 plus word article, so there’s a lot of material here.

One of history’s most important and influential magickal texts was meant to be a repudiation of Witchcraft and not an endorsement, but it’s funny how things work out sometimes. Published in 1584 Reginald Scot’s Discoverie of Witchcraft contained so much information that it can probably be labeled as the first magickal grimoire in the English language. Scot’s intention was to discredit magick, superstition, and Catholicism; instead he published a magickal reference book that would be treasured and utilized right up until the end of 19th Century. The Discoverie is said to be what Shakespeare used when crafting his Witches in Macbeth.

Scot’s book was full of magickal spells and formulations and by including them he hoped to prove that magick was silly and the province of the uneducated. What Scot didn’t count on was the appetite for magickal books in Britain at the end of the Sixteenth Century. Most of his readers simply skipped the pages debunking magick and went right for the spellwork. Scot did such a tremendous job of documenting magickal practices that the last third of his book truly reads like a grimoire.

One of Scot’s primary source materials was a hand written grimoire entitled The Secret of Secrets that had previously been used by two English cunning-men. Like most magickal books of the period The Secret of Secrets was “invented and demised for the augmentation and maintenance of their living, for the edifieng of the poore, and for the propagating and inlarging of Gods glorie.” (1) Not surprisingly much of The Secret of Secrets was a hand-annotated version of The Key of Solomon. A third edition of Scot’s book published in 1665 included even more magickal material, this time an anonymously written chapter entitled “Discourse on Devils and Spirits.”

The popularity of Discoverie over the centuries can probably be attributed to a few things. The first is the sheer and diverse amount of magickal materials contained within it. There are spells and formula for finding buried treasure, trapping spirits and demons, working with angels, and predicting the future. For anyone looking to profit from magick, Scot provided a way in. The book is also full of reference drawings, resulting in a book that looked quite magickal for the time. The book’s name is also rather provocative, perhaps appealing more to believers in magick than skeptics.

Until I began researching the history of English magick I had never heard of Discoverie before. It was rather influential for its time, but it doesn’t hold up particularly well today. Part of that is due to the skeptical nature of the early chapters, but there’s also a lot of superfluous material. I prefer my grimoires without juggling instructions for instance.

The biggest problem with Discoverie today is that it’s extremely hard to read. No one has ever updated the book into Modern English, and much of the material reads like it needs to be translated. It takes a few seconds to process some of the antiquated spellings in Discoverie too; for instance, son is spelled sonne and Saturday is spelled saturdaie. That would be easy enough if such odd-spellings were rare, instead there are dozens on every page.

A Few Spells from Scot’s Discoverie of Witchcraft

Despite the challenges that come with reading Scot many of the spells he transcribes are fun in an Elizabethan sort of way. To spare you from having to turn fier into fire I’ve taken the liberty of updating much of Scot’s language in the following spells. I’ve kept the Jesus, angels, and Jehovah stuff to provide a better feel for what spellwork was like at the end of Sixteenth Century.

To Know of Treasure Hidden in the Earth

On a piece of paper write the following charters on a Saturday in the hour of the rising moon and lay it where you think treasure might be hidden. If there’s treasure on that spot the paper will burn. These are the characters:

(Spells to find buried treasure were very popular in Europe and North America for centuries. This is one of the simpler spells for finding buried treasure, many of the more elaborate ones call for circle castings and various petitions to angels and sometimes demons.)

The Way to Turn Invisible by the Three Sisters of Fairy

Begin the spell by being away from people for nine days, preferably on even ground and not in a loft. Make sure all of your clothing is clean and sweet. Using a candle of virgin way, light a fire of charcoal in the center of the chamber you are occupying. Then take clean water from a stream running eastward and set it upon the fire. Wash yourself with that water while holding the candle in your right hand while walking around the fire three times clockwise and saying : “Panthon, Craton, Muriton, Bisecognaton, Siston, Diaton, Maton, Tetragrammation, Agla, Agarion, Tegra, Pentessaron, and Tendicata (note, these are all names of power: in other words the names of angels and Yahweh-God). End the ceremonial washing with the following names and benediction: “Sorthie, Sorthia, Sorthios, Milia, Achilia, Sibylia,. In the name of the Father, Son, and Holy Spirit, Amen.”

“I conjure you three sisters of the fairies, Milia, Achilia, Sibylia, by the Father, by the Son, and by the Holy Ghost and by their virtues and powers by the most merciful and loving God, that will command his angel to blow the trumpet at the day of judgment. He shall say ‘Come, come to judgment’ and I conjure thee in the names of all the angels, archangels, thrones, dominations, principles, rulers, virtues, cherubim and seraphim and by their virtues and powers. I conjure you three sisters by the virtue of all the real words I have said. I charge you that you do appear before me visible and in the form and shape of fair women in white vestements, and to bring with you to me the ring of invisibility. By which I might go invisible at my will and pleasure and in all hours and minutes. In the name of the Father, Son, and Holy Spirit. Amen.”

Once they have appeared bind the sisters by saying:

“O blessed virgins Milia and Achilia I conjure you in the name of the Father, the Son, and the Holy Ghost by their virtues I charge you to depart from me in peace, for a time. And Sibylia, I conjure you by the virtue of our Lord Jesus Christ and by the virtue of his flesh and precious blood that he took of our Lady the Blessed Virgin and by all the holy companies of heaven. I charge thee Sibylia by all the virtues said, that you shall be obedient unto me, in the name of God, and that you shall appear no matter the time or place I call to you. Be ready to come to me at all hours and all minutes and to bring unto me the ring of invisibilitie, whereby I may go invisible at my will and pleasure. Let it be done, Amen.”

If they don’t come the first night repeat the spell until they do come. For doubtless, they will come and lie in your bed. Lay your right hand out of the bed and sleep with a silken kerchief around your hand, and when the fairies appear be not afraid. For the three of them will come to you, fair and pleasant and all in white clothing and one of them will put a ring upon your finger, which will make you invisible. When they appear go with speed and bind them using the bonding spell included above. With the ring upon your finger, look upon a mirror and you will not see yourself. And when you wish to turn invisible slip the ring onto the finger they put it upon, and every new moon renew the ring again. For after the first time you perform this spell you will ever have this ring.

(I don’t ever recommend calling to a spirit, angel, or fairy that one would feel the need to bind. Fairies, like the ones being called to in this ritual, are sentient beings, and just like we don’t like to be commanded to do things, the fey don’t either. With a little bit of adaptation this is a spell that might actually work, though I’d be surprised if they ladies involved brought the conjurer an actual ring.) 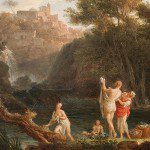 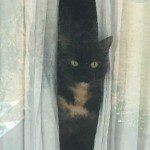 January 20, 2017 Paganism in the Age of Trump
Recent Comments
0 | Leave a Comment
""Different world views mean more than different ways of practicing, and they often encompass completely ..."
Falkenna The Promise and Peril of “Pagan”
"I use the word Pagan because in my community its safer than Witch. I don't ..."
Michelle Gillian The Promise and Peril of “Pagan”
"Loosing friends is indeed a long term grief."
Opens Heart Lessons Learned: Ten Years at Patheos ..."
"Don't forget peeling an apple in one strand to toss it over your shoulder to ..."
Wolf Samhain is What You Make of ..."
Browse Our Archives
Related posts from Raise the Horns