8 Ways to Celebrate the Autumn Equinox/Mabon

No matter what you choose to call it, the Autumn Equinox has long been one of my favorite sabbats. It’s a time when I can almost hear the Wheel of the Year turning, and signs of change are everywhere. There’s so much to harvest in the garden, and the sunflowers that stood so tall and proud back in August are now heavy and tired, ready to share their seeds with the waiting earth. The nights are now starting earlier too, with sunsets now noticeably earlier in the evening. Early Fall is a magickal time, and here are a few ideas on ways to celebrate.

I’m a bit obsessed with apples, and have been for twenty years now. Apple cider, hard apple cider, apple pie, and just plain eating apples! Everything apple is OK by me, and every August I start anticipating the impending apple harvest. This year a few Gravenstein apples had made it to my local Farmer’s Market before Labor Day, and while they were a bit smaller than I would have liked they were still delicious. The last few weeks I’ve seen the ubiquitous Galas and Fujis roll out, but also Mutsu (great for pies) and my personal favorite the Newtown Pippin. (A perfectly ripe Newtown Pippin is among the most delicious things I’ve ever eaten.)

Apples are the fall fruit par excellence, and make for a great focus when celebrating the early Autumn harvest. Apple juice (or cider) for ale/wine during ritual, and apple slices for cakes! I love celebrating the apple, and in the middle of every apple there’s a five pointed star, how much more Pagan can get it!?!?

The Balance Between Night & Day

Often lost in the harvest associations this time of year is just what happens on an equinox. While the divide between day and night rarely adds up to an equal 12 hours each way, it’s generally pretty close. Where I live the difference is five minutes (with five more minutes of day than night), and four days after the equinox that reverses, with night gaining supremacy.

Because night and day are nearly in balance, an equinox is a great time to work on personal balance. Sometimes we run too hot or too cold and need to realign ourselves and size up our priorities. This is the perfect time of year to re-evaluate where we are as people and/or Witches and take the steps necessary to get our personal and spiritual lives in order.

September feasting is a custom that dates back to at least the 1500’s in England (where it was known as Harvest Home) and most likely long before that. Harvest Home was a time for games, celebration, and feasting due to the gathering of the grain crop. While most of us are probably not reaping wheat or barely in our backyard this is still a great time for a feast and a celebration.

Mid to late September is prime-time for a Pagan potluck, and one possibly featuring only things grown in the garden or at least using only foods that are in season. For the more adventurous you could probably put together a potluck featuring only things flavored with pumpkin and allspice. (I know, I’m a terrible person for suggesting this. But pumpkin flavored waffles are delicious!) Feasting is one very traditional thing to do this time of year, and it’s worth doing. I know there’s a lot of shit in the world, and we need to find time for joy as well as anger and sorrow.

Every year the trees outside our front door drop the leaves they won’t need for the Winter, a reminder to us to get rid of the things that won’t serve us going forward. Have a bad habit or tendency you need to get rid of? This is the time to do it.

Because Autumn is the ideal time to sit around the fire, why not write the things you want to get rid of on a fallen leaf (or pinecone or even a piece of fruit) and throw it into the fire? This is easy magick anyone can do, quietly with friends, or as part of a bigger ritual. If something is holding you back in life, take this opportunity to get rid of it.

Go Back to School

Now I’m not suggesting that everyone run out and enroll at Cherry Hill Seminary, but education and learning do seem to be in the air this time of year. From August through early September back to school sales are all the rage, and seeing spiral notebooks on display at my local discount store reminds me of my misspent high school and college years.

Because there’s all that “back to school” energy drifting around us this time of year, we might as well take advantage of it. Dedicate yourself to learning a new skill or catching up on some Pagan history. Maybe this is the time to read that book you’ve been putting off. If you want to get some learning in before the madness of Samhain and Yule, this is your chance.

After apples, sunflowers are my favorite harvest treat this time of year, but there’s a sadness right now to the ones growing in my backyard. Their heads are heavy and my plants are starting to droop as they can no longer support the weight of the seeds they are bearing. It makes me sad, I don’t like seeing my ten foot flowers going into their final good night, but it also makes me smile. This is what they are supposed to do, and their seeds look healthy and strong and will go into that same ground next year (and will be used in a few spells too!).

When I see the face of my sunflowers I see the sun in the them, and just like my sunflowers, this year’s sun is starting to set. Every shorter day is a reminder that this turn of the Wheel is coming to an end. On my altar this Equinox I’m going to represent the sun with a sunflower from my garden, and thank Ol Sun for a job again well done.

Many of my favorite deities are associated with the harvest. Just last week my coven honored Dionysus as we thanked him for California’s grape harvest, and the seasonal altar in my living room is currently focused on Demeter. And those are only two of the many deities associated with the harvest, there are literally hundreds, and if you work with or honor one of those deities this is the time of year to honor them. If you are not close to a harvest deity and want to be, this is the time to seek them out too!

Remember To Look Outside the Circle

Over the last few years, September has generally been a difficult month. Between forest fires on the West Coast, and hurricanes in the Southeast and Gulf Coasts, disasters (due in large part to climate change) have become a part of early Autumn. It’s easy to be consumed with grief this time of year, and it’s often justified. When celebrating a sabbat, it’s important to look beyond our circles and remember the bigger picture.

When planning a Mabon feast ask everyone who is attending to chip in the cost of a meal and send that money to the Red Cross to help those in need. Some see the sending of prayers or energy as pointless in the face of tragedy, but I’m not one of them. If as Pagans and Witches we believe in magick we should utilize it, and send out some energy to those in need. However, that should always be coupled with mundane solutions too. Donating, organizing, and volunteering are not just good things to do, they feel good too, and when we do good works we are serving our gods, our extended communities, and our spiritual traditions.

No matter what you do or how you celebrate, I hope you enjoy this time of year as much as I do. 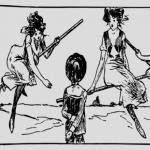 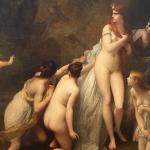 September 20, 2017 The 5 Most Important Books in the Modern Witchcraft Revival
Recent Comments
0 | Leave a Comment
"I too loved the Campanelli's books. Both me and my ex were really into them. ..."
Brian Michael Shea Rewriting Witchcraft & Overlooked Authors
"Useful list. Useful, influential books. I might trade Bradley's book for one of the Matthews ..."
Pitch313 The 25 Most Important Witchcraft Books ..."
"Being in the Craft is like being in anything else. I dunno where the concept ..."
Kyllein MacKellerann " Dirty Witchcraft Secrets
"I know a fellow student of Castañeda who is Yaquí. Such things today in Mexico ..."
Barros Serrano America’s Most Important Occultist(s)
Browse Our Archives
get the latest updates from
Raise the Horns
and the Patheos
Pagan
Channel
POPULAR AT PATHEOS Pagan
1