My first attempt at a solitary sabbat ritual took place during my third month as a Witch, near the fall equinox. I was living in a basement apartment at the time, where my bedroom closet doubled as a storage space for our hot water heater. Because it was a relatively private space (and very much away from my roommates), I thought this would be a good place for my first ritual. I sat down on the ground and lit four tealight candles, placing them in a rough circle around me. I then lit two more candles, one each for the Goddess and the God. This was followed by sitting quietly in the candlelight waiting for something to happen. But nothing did. 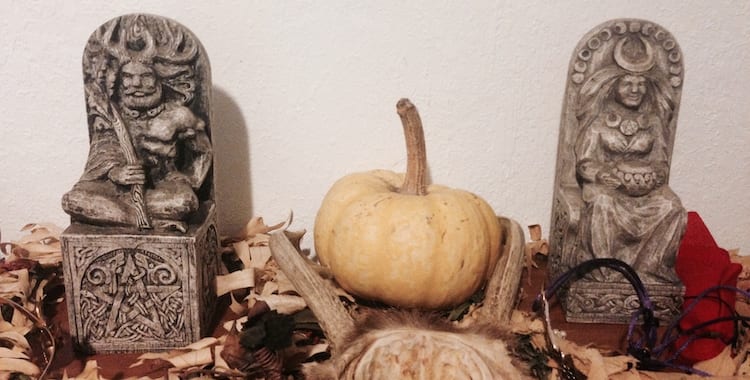 I’m sure that I tried to meditate or reach out with my consciousness and explore the energy of early autumn that night, but mostly I just felt stupid. At one point I felt like I heard the Lady nearby, but it was probably just the hot water heater clicking on. The books I was reading at the time made it all sound so easy: just cast a circle, call the quarters, rustle up the gods, and you’ll be between the worlds and walking with the Lord and Lady before you know it! But it doesn’t really work that way, and in many ways solitary ritual is even harder to do than ritual with a coven or group.

My experience at Samhain a few weeks later was about the same. At Yule I tried again, and this time I decided to read a ritual out loud from one of the books I owned. I was roommate-free that evening and thought that audible verbalization might be the key to ritual success. The moment I started talking, I realized that wasn’t the case. To put it bluntly, I felt silly speaking out loud in an empty house and was half-petrified that someone was going to knock on the door, hear what I was doing, and wonder if I was talking to myself and/or going slowly crazy.

Over the years, my solitary sabbat rites have improved a great deal (though I still rarely verbalize everything). If you find solitary ritual difficult, the following tips and suggestions are for you. If you already prefer solitary ritual to stuff done in groups, you’ll probably find everything below rather redundant. The most important thing to remember about solitary ritual is that the only way it can be wrong is if you don’t get anything out of it.

This sounds like a no-brainer, but many Witches overvalue the things they read in books and believe that what they do has to be done a certain way. The best Witchcraft is always the Witchcraft that works for you! If you don’t feel comfortable speaking out loud while alone, don’t do it, and most importantly, don’t worry about it.

So many books and teachers speak in absolutes: “Such and such MUST be done THIS WAY and ONLY THIS WAY.” That’s absolute crap. If what you’re doing doesn’t make sense to you or makes you feel silly, find a different way to do it. Nervousness and embarrassment are their own kinds of energy and will get in the way of whatever it is you’re trying to do if you let those feelings pollute your rituals.

Use What You Need for You and Just You!

When I’m doing ritual with my coven, my altar is always loaded to the gills with magickal tools. If it’s a recognized tool in the Craft, it’s on that altar, and often there’s more than one. But when I’m alone, I rarely bother with anything more than my athame. Magickal tools are great, but they aren’t necessary.

Here’s a secret a lot of books won’t tell you: the only thing needed to have a ritual is you. Ritual can be done anywhere, and many of the solitary rituals in this book take place in public spaces and can be done in such a way that no one is ever going to notice. If you need sixteen tools, by all means use sixteen tools, but you can probably get by with just a cup of water (or less) if you really want to.

Creative Visualization Can Be Just as Good as the Real Thing

When I’m standing alone in front of my personal altar doing a ritual, I usually imagine myself in a big open space, moving around and verbalizing my intentions with authority. I’m not really doing that, of course, but because I can see and hear myself doing those things in my mind’s eye, they become real. You don’t even have to stand in front of your altar to make the ritual real. If you can picture the magick and feel it inside of you, it then becomes your reality. Will it be just as effective as a ritual performed in front of a dozen flickering candles? If it resonates with you, then yes, it most certainly will.

Are you living with your parents or with people who make doing Witch ritual impossible? Then just do the ritual in your head before going to sleep. Put yourself in the situation you’d most like to be in and then picture the entire ritual unfolding from the quiet of your bed. To some people this may sound like a cop-out, but it’s not. When I was a baby Witch, the rituals that took place inside my head were often better than the ones I did when I had an entire house to myself.

My earliest altars were always on bookshelves, and those bookshelves were always against a wall. That meant that when I would work in front of my altar, I’d generally be staring at a wall. However, everything I needed for ritual was right in front of me. I could look in three of the four directions (with the fourth being just a glance over my shoulder away), and my altar always contained representations of the Goddess and the God, so they were always close by too.

When I began doing ritual this way, I worried that it would be impossible to cast a circle in such a small space with a wall, but that fear was unfounded. If the energy used to cast a circle can go under a floor, it can go through a wall! So when I do solitary rituals while facing the wall, I still cast circles when I feel the need to.

There are also times when I don’t bother casting a circle at all when I’m working alone. My primary solo working altar is in my office, and I’m about the only person who goes in there other than my cats and the deities I’ve invited in. And since most days spent writing begin with an offering of incense to a certain goddess, this altar exists in magickal space pretty much all the time. One of the best things about solitary ritual is that we can decide what we want to skip and no one will ever try to “correct” us for doing so. 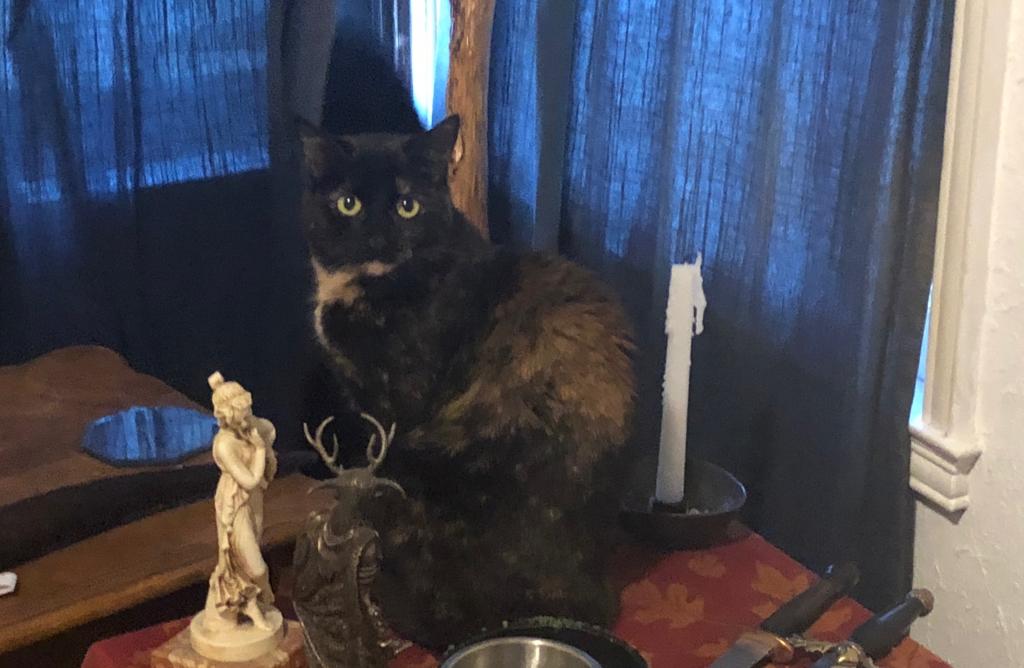 I’m something of a ritual planner, but the best rituals are often the ones we do because we feel inspired right then and there. These type of rituals are most often experienced as a solitary practitioner. There is no right or wrong time for ritual. The time to start a ritual is when you feel like it, and the place to do that ritual is wherever you happen to be.

When I visit the ocean, I often find myself drawn to ritual. I’ll be at the water’s edge and find myself drawing a circle in the sand and calling out to the quarters because the power of that space compels me to. At home I sometimes get sucked into ritual because I hear a favorite song that inspires me to commune with the gods or celebrate the turn of the wheel. Ritual should be meaningful, it should be fun, and it should be something we’re capable of doing without a lot of foresight or planning if the moment calls for it.

Intention Is the Key

Solitary ritual is great because it’s impossible to mess up. As long as your thoughts are clear, you’ll get the results you want. Unlike public ritual, where someone will always make a big deal out of you accidently saying “I call to the spirits of the south” while in the north, no one cares about such things in solitary ritual. The quarters know what’s going on, and so do you! Words are important in front of others because they keep everyone on the same page, but they matter much less when you’re alone.

What matters most in ritual is intent, not how you do (or don’t) say or do something. The greatest call to Aphrodite ever written will be wasted if you don’t reach out to her with your own personal energy. If you don’t truly want her to be there, she’s not going to show up. This goes for everything we do in circle. If we aren’t serious about our Witchcraft, it won’t work for us.

If You’re Having Trouble, Find a Ritual Center or Trigger

My solitary rituals improved dramatically once I set up a private altar. Being near my altar, which at the time consisted of a wine glass and a pine cone, made me feel witchy in a way that I did not while sitting in front of my hot water heater in the candlelight. My altar in those early days was nothing more than a two-shelf bookcase, but it quickly became the most magickal place in my house. (Sadly, I gave the bookcase away before I moved to California. I miss it and still think about it now and again.)

Excerpted and adapted from THE WITCH’S WHEEL OF THE YEAR: RITUALS FOR CIRCLES, SOLITARIES, & COVENS, Available online, your local Witch shop, and all the usual online outlets. 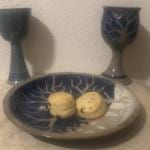 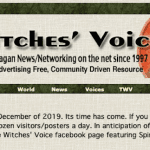 November 18, 2019 The Witches' Voice is Shutting Down
Recent Comments
0 | Leave a Comment
"As long as you are not publicly worshipping a deity from a living religion, I ..."
rosewelsh44 Wicca: Misconceptions & Misidentity
"Celts and Gauls seemed to allow anyone into their tribe who proved themselves worthy. That ..."
rosewelsh44 Wicca: Misconceptions & Misidentity
"True. And you'd probably get the disapproving look for even asking for them. I read ..."
Amanda Ingalls Why We Need to #DefendOccultBooks
"I had a friend once who tried to preach to me how to be Wiccan, ..."
Amanda Ingalls Why We Need to #DefendOccultBooks
Browse Our Archives
Related posts from Raise the Horns