The Call of the Gods: Moments, Practices, & Doubts

I had a friend recently ask me about communicating with deity, and it’s a question I’ve metaphorically sat on now for over a month. Looking back on my life as a Pagan and a Witch I’m often not sure how or when my relationships with deity (and deity adjacent) figures began exactly. Most of the time I simply found myself in a relationship without even really realizing it.

Looking back over my twenty-five years in the Pagan and Witchcraft worlds there have been three types of experiences that have shaped my spiritual life. There were moments when I truly felt something that defied logical explanation. Those moments were followed by practices that made my burgeoning relationships with deity more powerful. And finally there were times when I felt doubt, and I’m thankful for that doubt.

Despite not knowing exactly when certain figures have entered my life, there have been specific moments which have changed me. Upon reading my first Witchcraft book as an adult I prayed to “the Goddess” one July night and felt a jolt of electricity when I did so. There’s a part of me that wanted to attribute that jolt to the joy of blasphemy (I was still nominally a Christian at the time) or simply the thrill of doing something beyond the norm, but I remain convinced it was more than that. I reached out, and She took my hand.

I have absolutely no artistic ability but I somehow still ended up in an art class my freshman year of high school. I’ve forgotten most of my projects from that class, but I remember creating a small temple for the goddess Aphrodite out of clay. Why did I do this? I still don’t know exactly, but it felt like something was calling me to do so. It wasn’t a temple fit for a mouse, let alone a goddess of love and beauty, but I did my best. Over the decades Aphrodite would become a frequent visitor in my life.

I ran from everything that bared some resemblance to the Horned God for my first few years as a Witch. After finally acknowledging the name Pan I felt another one of those little jolts of electricity. This time, He was the one reaching out, and I finally answered.

Shortly after that I witnessed someone draw down deity for the first time. In that moment I mostly felt fear and awe. There was a presence there, not a jolt of electricity this time, more like an electrical storm had landed in our ritual space. Our High Priestess glowed with the power of our Lady, I was scared to look her in the eye. I was forever done playacting as a Witch after that moment.

I did reach out to Dionysus in college. I was in a mythology class and had been neglecting the reading. Instead of reading what I needed to I offered up prayers to Dionysus that I might get a good grade anyways (the unit was about Dionysus). I got the grade I wanted, but there was a debt to pay. Dionysus began showing up everywhere in my life. All I expected was a little help, I didn’t expect to begin a twenty year devotional relationship. (I think it worked out well for both of us though.)

I felt a hand on my shoulder at a Samhain ritual many moons ago. The god there at my side was not who I was expecting, instead it was mighty Cernunnos. Silent, but with the slight crook of a smile, he propped me up and helped me get through a difficult rite. He’s been doing it ever since.

She might be a folk-saint, but she carries herself like a goddess. Her candles are at my local grocery store, and reflections of her face dot the October landscape. There was no reason for her to be on my radar when I first whispered a prayer to her, but I did anyways. She’s not a part of my Wiccan-Witch circles, but she’s a part of my spiritual practice. She whispered, I listened.

When people ask me about deity, much of my problem comes from my lack of seeking. With the exception of that first prayer mentioned above, it feels like they came to me. Perhaps I’m attuned to their calls, or they want me to write about them, or that I’ve actively searched for religious experiences since I was young. Maybe some of us are wired in a way that makes us more receptive to messages from higher powers?

I know very serious Witches and Pagans who have never had the types of experiences I’ve had. There are also some who actively avoid such experiences, but many more who want them badly, and yet don’t have them. I have trouble believing that deity is simply “not listening,” perhaps some of us have trouble hearing? For me it’s always been easy, while others have to work and struggle for every sign and message.

After those first inklings of deity mentioned above, I acted on them. There are perhaps dozens of ways to acknowledge deity, the easiest one is just saying their names. It sounds ridiculously simply doesn’t it? Want to grow closer to Dionysus? Say Dionysus. We power deity so it can in turn empower us.

The simple act of acknowledging them gives them strength. Calling them increases their presence in our lives. It’s true that they don’t always listen, but we are often guilty of that ourselves. The more you call the more likely they are to respond.

In Wiccan-Witchcraft offerings are a part of what we do. The libation bowl on the altar is not for decoration. As the gods have given to us, so we also give to the gods. Besides, who doesn’t like a gift?

As the Charge of the Goddess says “nor do I demand sacrifice for my love is poured out upon the earth,” and in our house we honor this request. A libation or offering is not a 300 dollar bottle of wine, but it’s not Boone’s Farm either. It’s generally whatever we are drinking and it’s happily given and released. It’s something that has value, but the gods want us to enjoy life and afford the rent.

Reading about Witchcraft is not the same as practicing Witchcraft, but reading about the gods is essential. Deity employs a variety of ways to communicate with us. The god Pan was seldom seen, but often heard. Are those pipes upon the wind?

Myths, both from the past and today, are important, but so is practice. How did people worship Persephone 2000 years ago? How did they interpret her stories? How did one enter her cult? Some of these questions can’t be answered definatively, but every scrap of knowledge can help deepen our relationships and understandings. I never knew Dionysus until I understood that madness was just as important to his worship as merriment and mirth.

Despite my interactions with deity I still harbor doubts. Am I making this up? Is this a delusion? That kind of thinking will never completely go away, and it’s good to be skeptical. I think the term “discernment” is used too much these days, but it’s always applicable. Besides, skepticism makes the moments that can’t be completely explained away that much more powerful. My skepticism has made my faith stronger, not weaker.

Knowing histories and backstories is important, but it often brings up more questions than answers. Deities don’t age and grow like human beings. A goddess can be one thing to one group of people, and something completely different to another. There are moments where we can witness a god transforming into another god, or gaining a new name, or attribute to their worship. Those sorts of transformations can boggle the mind, but such is the history of deity. Perhaps the gods change and grow to better our understanding of them?

It’s also worth remembering that deity is above us and different from us. Look skeptically at anyone who speaks in absolutes about the gods, because there are no absolutes. There are clear wrongs, the gods do not want us to behave in ways the endanger ourselves or others, and an experience completely alien to myth and worship (both historical and modern) should be looked at with a great deal of skepticism.

I have no real answers when it comes to relationships with deity. When I feel as if it happens, I work on reinforcing those relationships. But even while pouring a libation the skeptical part of my brain wonders if I what I’m doing has any real value, and then I hear the pan-pipes in the distance and know better. I hope you hear them too. 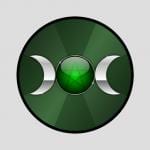 October 20, 2020 Voting Out Trump Is a Part of My Paganism
Recent Comments
0 | Leave a Comment
""Different world views mean more than different ways of practicing, and they often encompass completely ..."
Falkenna The Promise and Peril of “Pagan”
"I use the word Pagan because in my community its safer than Witch. I don't ..."
Michelle Gillian The Promise and Peril of “Pagan”
"Loosing friends is indeed a long term grief."
Opens Heart Lessons Learned: Ten Years at Patheos ..."
"Don't forget peeling an apple in one strand to toss it over your shoulder to ..."
Wolf Samhain is What You Make of ..."
Browse Our Archives
Related posts from Raise the Horns