Will Evangelicalism Last? Here’s My Take from The Huffington Post 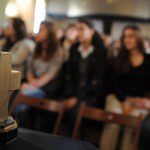 Rob Bell has another book coming out, the first since his bestseller “Love Wins” caused an evangelical uproar. Folks who haven’t even read the book yet are already critiquing it based on the marketing material alone. Denny Burk recently called Bell a “heterodox theological liberal,” and further claimed Bell is “no longer relevant to the larger evangelical theological conversation.” Burk predicted Bell’s book will be “greeted with a collective yawn,” a thought which is sure to be news to the good folks at Harper One.

The book’s not even out yet and the truth-police are ready to pounce. They’ll be packing their usual protests: Bell’s a liberal, heterodox, post-modern, weenie who wouldn’t know the truth if it bit him in the… well, you know the drill — more blood, more scars upon the body of Christ.

Some of the most respected voices in our tribe see storm clouds forming. Tony Campolo sees a split coming along the lines of obedience vs. theological orthodoxies. Others like Rachel Held Evans see the split coming along the lines of how we see God: Does love win (Rob Bell)? Or is God looking for some payback (neo-Reformed)? Whatever the subject, there’s more uncomfortable tension in the evangelical family than a Sacha Baron Cohen movie. This has many evangelicals wondering if we have a future together at all.

One thing seems clear: If evangelicalism continues to be defined primarily by a theological center, it will crumble — especially if guys like Denny Burk get to decide who’s in and who’s out.

For the first 1,500 years the church experienced only one major division, the East/West schism of 1054 A.D. When the reformation hit 500 years later, it was as though somebody yelled “fire!” and all non-Catholic Christians scattered in every direction. Now we have hundreds of denominations. The very moment orthodoxy became the central component around which we associated, reformed Christians — and later evangelicals — began to divide, continuing in perpetuity.

It’s laudable to care about the truth. Engaging in conversation about sound doctrine is an important part of sticking together. But these days when somebody in our tribe says, “I’m fighting for the truth,” you just know it’s a ruse.

For one thing “Truth” is not rational abstraction — a concept, doctrine, or idea you can write down — especially not one which you conveniently have right and everyone else conveniently has wrong. Truth-as-a-rational-abstraction constitutes a denial of the incarnation (and big chunks of the New Testament). Doctrines and theologies can point to the truth but they are not themselves the Truth. The Truth has been revealed to us in and through Jesus Christ. Truth is a person. Jesus is the Truth.

Even if one keeps the truth-as-a-rational-abstraction account of truth, it still should not constitute the evangelical center. Christians are not meant to believe in a rational account of the truth; we are meant to take up our cross and follow the one who is true; the truth as it has been revealed to us in Jesus Christ. But for the truth-police, Christianity has become analyzed instead of lived.

Most importantly, we must recognize that the fight for truth is nearly always a fight for control. Those who passionately defend the truth are often just grasping for power. It’s a game that only those who have never been transformed by the love of God have the stomach for. Whatever you think of his writing, in all the attacks Rob Bell faced over his book Love Wins he never got ugly or defensive. Bell’s Christ-likeness patiently proclaimed the good news of the resurrection in stark contrast to those who tried to burn him at the stake.

What’s the alternative? If we refuse to organize around doctrinal statements, if we admit that in the hands of immature people these statements are just a means of power and control, then what can hold us together?

The answer, I believe, is mission.

Mission is this rich confluence of orthodoxy and orthopraxy, where the truth ceases to be a rational abstraction and becomes embodied in concrete communities of action who are able to work together despite doctrinal differences. Mission begins with the recognition that the center of Christianity is Jesus Christ and his mission of redemption. Mission should constitute the evangelical center. I’m talking about justice, mercy, faith and living in allegiance to the Gospel. If we join together around the pursuit of those things, then we will see how much we have in common.

Mission fosters the capacious orthodoxy necessary for us to stick together. Mission allows for the generous diversity of thought which is essential to a healthy evangelical gene pool. Biologists teach us the less diverse the gene pool, the more at-risk the species. The more homogeneous our beliefs become the less likely evangelicals are to survive. We need a rich, diverse orthodoxy. As the evangelical truth-police work to silence all minority reports, they are actually working against the overall health of the tribe.

Those who wish to functionally excommunicate Rob Bell and others like him are alienating the very Christians who promise to provide the kind of theological diversity essential to our healthy future. We should be welcoming Bell’s voice, not silencing it. If evangelicals have a future together, it will not be the way of those who cry “heresy” and let slip the dogs of war. It will be with those who unite around mission and prefer a rich theological landscape.

Theological diversity is nothing to fear. The Gospel doesn’t need people who will defend it. The Gospel needs people who will become transformed by it and live it out. That’s mission. And even if it does need defenders, the best defense of the Gospel is not an attack on the heterodox — it is a people who have been transformed by the love of God into instruments of redemption, learning to live in fidelity to God and each other no matter what our doctrinal disagreements. A people who have been formed in self-sacrificial love and theological humility of the one, the holy, the catholic and the apostolic — these are the marks of the church. Where these are absent, the church has ceased to be faithful and will most certainly falter.

February 22, 2013
How To Avoid Huge Ships - A Little Friday Funny
Next Post 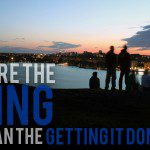 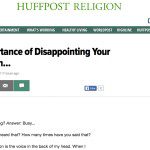