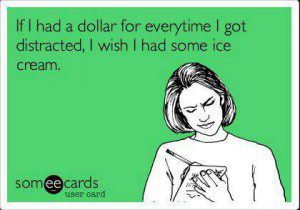 I was sitting in a restaurant with a few friends recently, and every so often a cell phone would emit this short whistle tone. You may have heard this alert, it’s the classic tweet alert on the iPhone–an unmistakable tone that says, “Over here.” That little whistle could be the global symbol for distraction.

We live distracted lives. For better and for worse, the reality is that smart phones and personal computers are the chief culprits. The problem is that distractions make us stupid.

Stanford University researchers did cognitive testing with two groups: one in which participants routinely did a lot of media multitasking, and another group of participants who did far less multitasking. The results were, “The heavy multitaskers performed poorly on all the tests. They were more easily distracted, had less control over their attention, and were much less able to distinguish important information from trivia.”

Behavioral scientists once did a study in which they put groups of students in three rooms and asked them to perform standard cognitive tests. In room one, they completed the tests with no interruptions. In the other two rooms, they were told they might be contacted via instant message device with more instructions, and both rooms were subsequently interrupted twice. The two groups who were interrupted by an instant message scored 20% lower. That’s a difference of two full letter grades for the average classroom.

The reason distractions make us stupid is that the brain is naturally equipped to handle a single focus, one task at a time. The brain is not equipped to handle parallel tasks. It simply can’t be done. Humans don’t have that kind of hardware. What the brain ends up doing instead is toggling between the two tasks in rapid succession. This toggling diminishes cognitive ability.

Singular focus allows your brain to marshall all of its processing power to serve one task. As it turns out, the brain’s full spectrum of abilities will typically take some time to come online. If you focus on one thing for an extended time without distractions or interruptions, the brain’s stunning array of higher mental faculties–logic, reasoning, memory, creativity, organization, error correction, emotional connection, empathy, joy, big picture thinking, concept integration, cross hemisphere brain function–will be at your disposal.  When we are distracted by interruptions of any kind, it can be difficult for the brain to build momentum, and we cannot forge the kind of deep neural connections we are capable of.

Every shift of focus will diminish mental capacity. The brain can’t marshall all of it’s resources if it has to keep restarting every 11 minutes–which is the amount of time Gloria Mark, a researcher from UC Irvine, says a typical office worker has between distractions; 25 minutes being the average amount of time it takes to get back on task.

Researchers repeated the experiment with the three groups in three different rooms doing cognitive testing. Just as before, group one was uninterrupted. Group two was interrupted twice. Group one performed the same. This time group two scored 6% higher. (they learned to cope with the distraction). But the real surprise was the third group. The third group was told they would be interrupted just as they were the previous time. This time, however, they were left alone. Group three actually outperformed the first group (the participants who were working with no distractions). When participants in the third group were warned of an interruption, but that interruption never came, they did 43% better and topped the scores of the control group.

Apparently experience dealing with distractions can make us more able to deal with them when they arise. Expecting that an interruption could be coming will help us to cope with the distraction. If the interruption never comes we might even experience a period of higher overall cognition. It may not be we need to eliminate distractions so much as we need to structure them into and out of our time at appropriate intervals.

Here are a few ideas that may be helpful:

If you have a two day project, make day one a day in which interruptions and essential interactions can happen. Make day two an independent workday with no distractions at all. Remember that focus is nothing more than the elimination of distractions. Focus is, in some sense, a byproduct of the ability to eliminate the distractions that make us stupid. Big blocks of uninterrupted time will not just make us more productive, which is always nice, but it may just make us smarter, allowing us to use all of the mental abilities our minds have to offer. 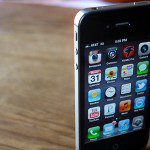