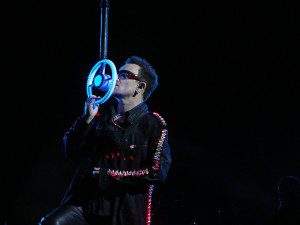 Granted, Bono has to have one of the more active egos of our time. He exists in that elite pantheon of fame along with immortals like Elvis, MJ, and Michael. The difference for him being that he seems to have at least some measure of awareness of the dangers of his position, and the responsibilities. Despite the unlimited income which affords him the rare ability to have almost whatever he wants whenever he wants it, and despite his ginormous messiah complex, Bono still seems to want to grow in wisdom and character, and favor with God and man. It’s incredibly impressive, and even more rare.

So as much as you might be tempted to dismiss what comes your way from Bono, especially after U2’s latest album was so infamously foisted upon you by iTunes this year, I recommend engaging him anyway. He is a rare breed, and he’s finally done enough living and suffering to be worth a damn. It would be a shame, and just like American culture, to begin to ignore him at the very moment he finally has something to say.

With provocative entries about each of bis bandmates, his dyslexia, his glaucoma, his recent motorcycle crash in Central Park from which he admitted he “ended up in New York Presbyterian with my humerus bone sticking through my leather jacket. Very punk rock as injuries go,” and the politics and causes with which he is so passionately involved, Bono sat down to give thanks in an A to Z homage to his favorite people, places, and things. It’s quite touching. Not only is this the most personal thing I’ve ever seen Bono write (complete with an X-ray of his new titanium elbow), but also the most openly I’ve seen him write about his family, especially his kids. You’ll be glad to know, as I was, that one of his sons is a serious musician.

It turns out that A is for Ali (wife), J is for Jesus, and Jimmy Fallon – which is cool, I guess. I sort of thought Jesus would rate a solo position, his own retired letter, so to speak. Since F was for the F-word, I’m thinking Fallon might’ve gone better in place of that entry. Nevertheless, the man bears witness:

At this time of year some people are reminded of the poetic as well as the historic truth that is the birth of Jesus. The Christmas story has a crazy good plot with an even crazier premise – the idea goes, if there is a force of love and logic behind the universe, then how amazing would it be if that incomprehensible power chose to express itself as a child born in shit and straw poverty.

Who could conceive of such a story? If you believe it was the protagonist, as I do, then we should try to be really respectful of people who think the whole thing is a bit nutty or worse… Religious people are the best and worst of us…handle us with scepticism…

Strangely, maybe, some of the most rational thinkers see some kind of cosmic sense in all this… Francis Collins, who led the human genome project, is an obvious one… the language of science and faith are not necessarily at odds….

Earlier this year the Hewsons got to see the view that John had as he wrote the Book of Revelation in a cave on the Greek island of Patmos. I can’t make head nor tail of that book but I love the idea that he was taken by a vision… a poetic rhapsody of man describing what looks like a nuclear firestorm ending the world.

William Blake was similarly seized by visions which he tried to write or draw. We stole the title “Songs of Innocence/Songs of Experience” from Blake. You can’t approach the subject of God without metaphor… literalism like legalism is an attempt to shrink God to recreate him in our own image.

Almost as glorious as that cave is the Matisse Chapel in Vence, France, which we visited this year with a friend on her birthday. The birthday girl couldn’t get over the fact that Matisse designed not only the stained glass but the priests’ vestments which can only be described as, eh, 70s Funkadelic. The chapel opened in 1951.

But back to the Christmas story that still brings me to my knees – which is a good place for me lest I harm myself or others. Christmas is not a time for me to overthink about this child, so vulnerable, who would grow so strong… to teach us all how vulnerability is the route to strength and, by example, show us how to love and serve.

To me this is not a fairy tale but a challenge. I preach what I need to hear…

Earlier this year Salon published an article on U2’s fall from universal praise titled “How U2 Became the Most Hated Band in America.” An overstatement I think. Nevertheless, it is now not uncommon, even among their ardent fans, to be a tiny bit dismissive of U2. Seldom is this in the form of outright criticism. It’s more of just a chuckle, and an air of condescension, like when one of your friends walks in with his jeans cuffed in a way that tell you he isn’t up to date with the latest fashion.

Screw that. The American penchant for building people up only so we can tear them down is a tired script. Bono isn’t like the rest of the fame immortals, and the ability or desire to write something like Bono’s “Little Book of a Big Year,” is what sets him apart. If you want to see a rock star pursue faithfulness and the stewardship of fame… here you go. 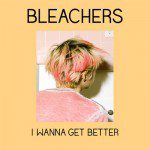 There will be no highlights on...
slacktivist
Related posts from Paperback Theology 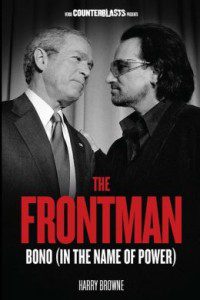