Nazarene Controversy Highlighted in The Daily Beast: Here’s My Take… 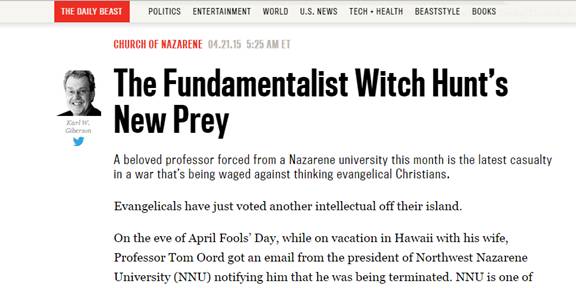 I’m just going to give you my take on this, then link back to the article…

Karl W. Giberson is serious scholar, and a former faculty member at Eastern Nazarene College. Giberson says Oord is the victim of a fundamentalists witch hunt. He says, “The controversy at NNU is one battle in the long war that is being waged—and slowly won—against thinking evangelical Christians.” I know he’s right about the battle being waged. I hope he’s wrong about it being won. I do think the support showed Tom Oord tells us that fundamentalists are now facing a more organized and vocal opposition.

Tom Oord’s case is special, I think, because Oord is special. As Giberson notes, Oord is gentle and pastoral. He doesn’t demand that you believe the way he believes in order to worship, serve, teach, and engage in mission together… and that’s the difference. That’s at least part of why he has so much support.

My take is that the only way through this struggle between a more conservative, fundamentalist evangelicalism, and a more progressive, capacious (for lack of a better term) evangelicalism involves worship.

One of the most difficult things for any Christian to do is learn how to worship with those who do not think like they do. To do so requires us to value fidelity to God and love of our neighbor over and above our need to feel safe and in control. The reality is that we are not in control, and (if we mean to follow Jesus, that is), we are vulnerable, both to one another and to the world around us. The call is take up your cross, not take up your political maneuverings…

When Jesus was called to the scene of the woman caught in adultery he made two statements. First, he said, “No one condemns you, so neither do I.” He said this after chastising the crowd by suggesting that those who are without sin should start the killing. (The Nazarene issues re: holiness should come to mind. Something Oord wrote eloquently about in Renovating Holiness). Second, he said, “Go and sin no more.”

No one condemns you, so neither do I is a statement of inclusion. You can be with me. Go and sin no more, is a statement of exclusion–stop with the behavior that is tanking you and this community …exclusion and embrace, exclusivity and inclusivity held in balance and tension.

Walter Brueggemann often notes that in the Old Testament, the Priestly tradition–with their focus on holiness, ritual purity, law, and sacrifice–was never allowed to abolish the testimony of the Prophetic tradition–with their focus on mercy and justice. Within evangelicalism, the priestly tradition’s analog is the fundamentalist wing–exclusivity. The prophetic tradition’s analog is the progressive wing–inclusivity. Neither side can ever allowed to abolish the other side. The church needs to hear the testimony of both traditions. The key question is, can we worship together in unity and peace?

The goal is not uniformity of thought, but co-participation in the worship of Christ in all things, and a humble willingness to make space for those who have been called to an alternate obedience. This isn’t a struggle between who is right and wrong. This is a struggle for oneness and unity. In his short ecclesiology The Church, Wolfhart Pannenberg says it this way:

The faithfulness of the church does not rest on your opinion about whether or not evolutionary theory can be harmonized with the scriptures. The faithfulness of the church hinges on our ability to worship together in faithfulness regardless of where we come down on that, and any number of other controversial issues. Our visible disunity disqualifies us from even calling ourselves the church, since oneness is constitutive of what it means to be the church. We’ve got to make space for people who don’t think like we do, friends. It’s the only way forward. 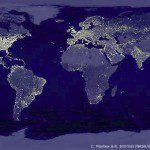 April 22, 2015
Earthday: Why Christians are so Bad on the Environment
Next Post 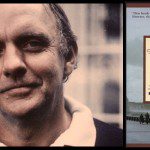 A spy in the house of...
slacktivist
Related posts from Paperback Theology