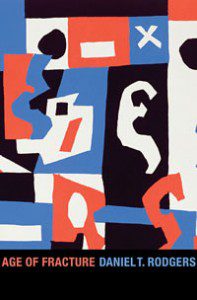 In his Bancroft Prize-winning book, Age of Fracture, Daniel Rodgers tells the story of how, following the 1970s, America’s intellectual world fell apart. Ideas that were taken for granted during the mid-twentieth century, like national consensus, gender norms, racial identities, historical meaning, and market-based capitalism, fragmented into numerous directions. The social unrest of the 1960s (which challenged traditional assumptions), the end of the Cold War (which eliminated the nation’s most potent unifying rhetorical mobilization), and the culture war battles (which politicized and bifurcated cultural meanings) left Americans grasping to find some form of hegemonic basis to hold on to while all semblence of mainstream consensus fleeted away. (Such hegemony was never actually present, of course, but it had previously played an important public, if superficial, role in a perceived national consensus.) In short, the intellectual foundations of what “society” meant were coming unhinged. The key task for American thinkers in the last quarter of the twentieth century, according to Rogers, was to figure out what to do with the fractured mess that modernity produced.

Religion, of course, played a major role in that task. And this task of mending a fractured world, of course, is hardly new, even if it is now publicized (and politicized) to a degree heretofore unfathomable. Throughout the twentieth century, Evangelical culture, for instance, constructed a parralel mental world in which their “experts” could unify physics, biology, science, and history into ways that harmonized with their moral and theological beliefs; as Randall Stephens and Clark Gibberson have persuasively shown in The Anointed, the Evangelical mindset cast its all-reaching tentacles into various branches of knowledge and society in order to reaffirm a specific worldview. This impulse only increased following the culture wars, as various ideologies grappled with contesting realities, often resulting in the construction of disjointed mental worlds; often, the answer to a fractured culture is to strengthen boundaries and exclude competition. Mormonism, of course, has at times been a prime example of such a process, as LDS leaders, through both sermons and curriculum, sought to establish a religious culture in which answers are readily available, debate is unnecessary, consensus is assumed, and doubt is inexcusable; in response to a fractured world, then, Mormonism offered a safe harbor of traditional wholeness.

Such a framework perceivably has roots, or at least has claimed roots, in Mormonism’s origins. When a prophet is receiving textual revelations in God’s own words, where is there room left for ambiguity? Some scholars have argued that Joseph’s Smith’s primary task was to solve the “fragmentation of reality.” Yet Smith also left traces that were much more ambiguous. Most importantly, his introduction of councils, largely in the place of his “Thus Saith the Lord” revelations, seemingly invited competing dialogue and pragmatic compromise into the highest functions of the church. And while some revelations were straightforward in their pronunciations, in others they were just as pronounced in encouraging “anxiously engaged” saints to figure things out on their own. Indeed, the vibrant speculative tradition on nineteenth-century Mormon theology demonstrates that, once provided with a foundational framework, religious questions are as potent as answers, and the effort to struggle after truth was both invigorating and rewarding. Rather than being satisfied with simple answers conceived within a fully-realized and staid mental structure, Parley Pratt spoke for many when he yearned for a more dynamic arena of intellectual rigor:

What a glorious field of intelligence now lies before us, yet but partially explored. What a boundless expanse for contemplation and reflection now opens to our astonished vision. What an intellectual banquet spreads itself invitingly to our appetite, calling into lively exercise every power and faculty of the mind, and giving full scope to all the great and ennobling passions of the soul.

Perhaps Mormonism can yet prove to be a potent worldview for modernity because it is centered on the notion of a contestation over ideas, of the struggling between realities, of the eternal quest to separate truth from error. This process, despite cultural claims to the contrary, can be much more complicated and much less black-and-white than sometimes assumed—or at least than sometimes professed, especially within a prophetic tradition. But perhaps Mormonism is at its best when it is left under construction, when ithighlights the difficulty, rather than the simplicity, of gathering truth. When Smith claimed that you must “get all the good in the world” if you want to “come out a pure Mormon,” perhaps it was more of an encouraging taunt than a reassuring platitude. Perhaps it is 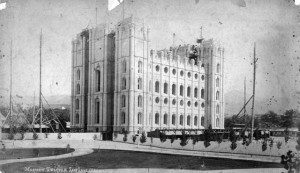 the process, and not merely the result, of finding truth in a fractured world that is beneficial. Perhaps dogma, and its attempt to settle all questions and simplify the surrounding world, is the antithesis to personal growth. Perhaps a fractured world, both within and without the church, is the perfect condition in which to seek truth.

“By proving contraries,” Joseph Smith proclaimed shortly before his death, “truth is made manifest.” In order to start the process, of course, one must first be willing to acknowledge the contraries.

February 4, 2013 "It's like Methodism, only more": Mormon Conversion and Narratives of the Great Apostasy
Recent Comments
0 | Leave a Comment
"I pretty much wrote the exact same thing about my husband's "bachelor name" back in ..."
Brita Long No, I Did Not Keep My ..."
"I just watched some footage of him. I believe you might be literally right.https://www.youtube.com/wat..."
Wubbsy Jon McNaughton, the Obama Era’s Most ..."
"Funny that he chose to draw Obama when going away and goofing off on a ..."
Wubbsy Jon McNaughton, the Obama Era’s Most ..."
"From the OP:What I can’t support, however, is anyone using this new policy as a ..."
Kiwi57 To the People Defending the Church’s ..."
Browse Our Archives
get the latest from
Latter-day Saint
Sign up for our newsletter
Related posts from Peculiar People