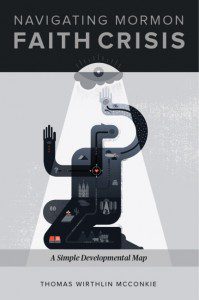 A man, peering over the ledge of a precipice into nothingness; a woman, looking down in horror at the cracks blooming across her chest, only to see that they reveal a star-studded interior.

These first two images of Thomas McConkie’s newly-released book, Navigating Mormon Faith Crisis: A Simple Developmental Map, juxtapose two conceptions of “faith crisis.” One is the binary clinging to safe ground or leaping into an abyss; the other, McConkie’s rendering, casts it as a transformative rupture, or rather, series of ruptures, that usher in more light and wisdom each time we re-emerge.

What characterizes McConkie’s contribution to the growing literature on faith crisis is the scaffolding of adult developmental stages, familiar to some through the likes of Fowler’s Stages of Faith or Piaget’s pioneering stages of child development. McConkie interweaves the field’s latest research into a compassionate and gently illuminating exploration of the spiritual expressions of five core stages —“Diplomat,” “Expert,” “Achiever,” “Individualist,” and “Strategist”—and their respective “faith crises,” strengths, and challenges.

Thus, the book offers a bird’s eye view of the whole spiritual landscape, encompassing a range of faith transitions that individuals and communities face (tailored but certainly not exclusive to a Mormon context). This focus creates more of a meta-approach; rather than addressing any particular “crisis” (like an issue of Mormon doctrine or history), the book sketches the underpinning values and frameworks that lend themselves to particular kinds of faith crises—or rather, what may appear as such while shifting between stages. “A faith crisis,” McConkie suggests, “may simply be a developmental shift unrecognized, unsupported.” This book helps fill that gap.

I could write a whole series of posts on the beautiful insights of this book (maybe I will), but I’ll just headline a few excerpts to give you a taste of the kinds of paradigm shifts McConkie offers:

This book is for everyone, and especially for those whose sense of integrity, honesty, and authenticity make it as hard to stay as it is to leave.

“Whether we are active members, inactive members, or active members who are considering going inactive, my sense is that we all seek to authentically express our relationship to Mormonism. For some, leaving the Church is tempting but would ultimately be gut-wrenching; too much of our identity belongs to it and we feel called to find a way to make it work. For others, staying in the Church feels dishonest. There are too many beliefs and practices that no longer resonate with us, and the pain of attending church week after week has started to drown out the spiritual benefits of community worship. Many in these predicaments feel that in order to be authentic, in order to show up more fully and engage with the faith community more genuinely, they have to be able to show up with all of themselves…. Whether we are active or inactive, radical or straight-laced, my argument is that we can all learn to express our unique growth in healthier ways. Through insights from the field of adult development, we can learn to recognize and validate the myriad relationships we all form with Mormonism. And we can thrive together as a community of support that has learned to honor one another’s process of spiritual unfolding.”

Instead of the urgent, one-and-done crisis, we can keep calm and prepare for continual deaths and rebirths through stages of development. That is how we grow.

“‘Crisis” implies a state of emergency. “Transition,” however, points to a deeper calm—even a sense of discovery as one chapter ends and another begins…For those in faith transition, for those in full-blown faith crisis, I would suggest that the question might not be whether you’re still Mormon or still have faith in the Gospel. The more inspired question may be: How might this current disorienting dilemma in your life point to a deeper faith already emerging? What in you is dying, and what is resurrecting in new form? The study of adult development shows us that we all die to past selves and are born into new personhood again and again. Can we die to our smaller understanding and live, in the words of Rilke, to be defeated by greater and greater things?”

That is also how communities develop. But when those stages (and the diversity they produce) are stifled and that spiritual biodiversity is siphoned off (through self-exile or marginalization), the community will break down.

“As a passionate-wanderer-gone-active member, I have questions that I believe apply to many of us in twenty-first-century Mormonism. What would have happened if my years away from the Church were culturally recognized as a faith transition? What if we had better tools to understand why people leave and to provide the right kind of support for their own conversion process? ….I understand that not everybody who leaves our fold will wish to come back, but I also know that if we were to redraw our maps that many who feel estranged would not make the same mistake I did of exiling themselves. In the crucible of their own conversion, maybe they would find unexpected solace among us. With an increased awareness of developmental diversity, maybe we could all learn to bear one another’s burdens more generously. It is a possibility too important not to explore.”

“…We need all the stages, all possible perspectives, in order to thrive… As with any ecosystem, when any one species begins to dominate, the natural balance and harmony of the system breaks down. When any given perspective begins to dominate others, we all grow dimmer. So there is developmental diversity and there is dominion. The one leads to greater life, the other, to sickness in one form or another.”

We can be more open to that spiritual biodiversity if we recognize the particular genius of each stage, and remember that “further” does not mean “better”; it only means more complex, and part of that complexity depends on integrating the contributions and insights of the previous stages as we move into new ones.

“Each stage has its own worldview, its own talents, its own genius. Different stage features are adaptive to different situations at different times. I can’t stress this enough: higher in no way amounts to better when it comes to human development. The stages we observe and measure are said to be increasingly complex. So-called higher stages can hold more perspectives than those that precede them…[But] growing up into later stages is only part of the story. We are just beginning to understand in the field of development what it means to “grow down,” to endlessly refine the capacities and gifts from the earlier stages we inhabit.”

Make room for doubt at the table. It is the expression of epistemological humility, of the recognition that we are finite creatures who must make meaning from our limited language and perspectives; embrace doubt’s role in keeping us from worshiping our stories, and keeping us open to Truth

“What we’ll see together in our exploration is that doubt can be successfully managed and more or less exiled at earlier stages of development. But there is a tipping point in our spiritual growth beyond which it becomes necessary to take on more complexity and allow doubt a permanent seat at the table. We come to recognize that doubt, our former foe, actually exists to support, animate, and ultimately give rise to the deeper faith we seek….Without doubt, we confuse our small faith with Transcendent Faith. The story we tell about experience comes to replace the actual experience. We mistake the map for the territory. We inadvertently make idols of the empty symbols of language and forget what we had set out to worship in the first place. Doubt your stories. Doubt that you understand the final meaning of life. But do not doubt the reality of the Divine (even if you don’t call it the Divine). That’s the message.”

“….Note that I am not suggesting a relativistic approach to faith here, one where each and every view is taken to be as good as any other. In fact, I am suggesting the opposite: as our faith and understanding mature, our views become more comprehensive. They reflect more of the Truth. It is only when we take beliefs to be final and absolute, rather than representations of the Truth, that our development becomes arrested.”

This book has changed my life, and I don’t say that lightly. While I have tried to sketch a general outline here, I can’t help but close on a personal note. I’ve wrestled with faith all my life, and underneath, I felt there was something noble in the struggle; in knocking down the doors, trumpeting all my questions, demanding answers with what I thought was unflinching courage; and when I couldn’t find answers, choosing to believe—again, and again, and again—with what I thought was also courage. And I think it was. But that courage wasn’t enough. There came a point when the silence was too deafening, my sense of truth and reality too fragmented and slippery, the point of it all lost in surreal debris. This line from McConkie leapt out in its startling empathy: “There were even the times I felt so desperate, so lonely and broken, I found myself timidly wishing for death.” In those moments, McConkie found that “an unnamable Grace sustained [him]”; I have also felt the faint touches of that Grace, but haven’t known how to trust it again until I read this book. 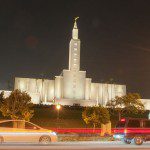 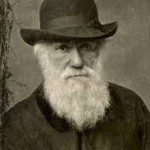 October 4, 2015 Science and Religion
Recent Comments
0 | Leave a Comment
"For some reason, this article popped up in my feed just today. I can't imagine ..."
trytoseeitmyway The Women Who Enable Abusive Men
"In response to a 2012 atheist billboard I wrote the following about it saying the ..."
DisqusIMO On Mormons and Planets
"Season 4 of Fargo--where Timothy Olyphant plays the Mormon lawman Deafy and Chris Rock plays ..."
xert Mormon ‘Niceness’
"I pretty much wrote the exact same thing about my husband's "bachelor name" back in ..."
Brita Long No, I Did Not Keep My ..."
Browse Our Archives
Related posts from Peculiar People