For scientists, they use the scientific method to answer problems, which is to have a hypothesis and to continue to test it until one has the facts. Once these are discovered, they are made into theories, which are based on facts, differing from theories in other areas of study. For philosophers, they also observe, and give observations on that they gain from these and state them as truth. For those who believe in religion, most look to men who claim to receive information from deity as to the purpose and origin of life, and follow accordingly.

Within Mormonism and the evolutionary world, out method of getting answers is very similar. The scientific world uses the scientific method, which is a pattern of deductive reasoning (having a general hypothesis and then coming to something specific). For instance, the theory of evolution is a theory that has come after carefully observing life and changes that happen, and then postulating why that is. Mormonism uses deductive reasoning by saying that since all men are entitled to revelation, you as an individual are entitled to it as well. Also, we also both admit that evidence does not always equal proof, and that there is much more to learn about the given subject than what is currently known. That is amazing similarity, given that many other Christians believe that what is known about religion is already known, and that there is nothing new that will be revealed.

However, there are some conflicts between evolution and Mormonism. As currently constituted, evolution believes that this Earth is 4.5 billion years old and that man is not divinely created, but the evolved species of a lower form of life. Death has always existed on the Earth, and the common ancestor of the human race is still unknown at the present time. Mormonism does not take a definite position on the age of the Earth (because the scriptures do not specify it and it is not critical to salvation), but do clearly believe than man is made in the image of deity and that eventually he will become as his maker (who in the ultimate sense is his father). Also, animals and all forms of animal life were divinely created, and there was no death on the Earth before the fall of Adam.

While it is true that there are many differences between evolution and Mormonism, evolutionists do not need to completely discard their scientific knowledge to have a belief in Mormonism. They can continue to believe in the scientific age of the Earth, because the way that men count time and the way that God counts time are very different. The idea that man goes from a lower form of life to a greater can even be accepted. Mormonism believes when began as spirits, gained bodies, and will eventual gain exalted bodies, which are far better than the ones we now possess. Hence, in a way, Mormonism fully embraces a form of evolution; man will eventually evolve into a God. But even greater than all this is that Mormons also fully believe that truth will never conflict, true science and true religion go together. And both science and Mormonism fully embrace that not all truth has yet been revealed.

Perhaps the greatest thing that can be learned in all this is that not everything has to be black and white, or one way or the other. You do not have to discard science because you believe in religion; neither do you have to believe all religion is worthless because you believe in science. Some of the greatest minds have believed in both, such as Albert Einstein, Sir Issac Newton, Abraham, Alma, Henry B. Eyring, Russell M. Nelson, and the list could go on and on. The honest seeker of truth will seek to bring both science and religion into agreement, and also put some things on the shelf until a final conclusion is reached in the future. 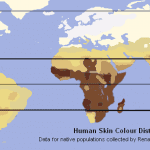 October 6, 2015 Souls, not Skin: Why I stand with the 3 new Apostles
Recent Comments
0 | Leave a Comment
Browse Our Archives
get the latest from
Latter-day Saint
Sign up for our newsletter
Related posts from Peculiar People