No, I Did Not Keep My “Maiden” Name 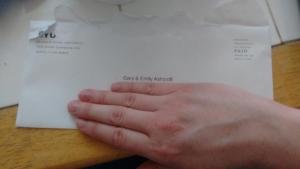 Recently my alma mater, Brigham Young, mailed a request for donations. To my great surprise, it was addressed to a woman I’ve never met: Emily Ashcroft. You see, my husband’s name is Gary Ashcroft, which leads to all sorts of mix ups where people assume I go by his last name. When we got married, generous people wrote out checks to “Gary and Emily Ashcroft” without realizing that I had no way to deposit them. And every time we move into a new ward (congregation), I have to explain to people that we are married, not cohabitating.

Usually the mistake comes from well-meaning people who’ve just barely met me. Or distant family who want to include me when they mail a Christmas card but can’t remember my name. They’ll refer to us “The Ashcrofts,” or call me “Sister Ashcroft” if we’re at church. And when I politely correct them, they immediately make the switch and call me by my real name. If they forget, I politely let them know again, and they remember the next time. That’s what decent, respectful people do: they might accidentally call you the wrong name (and what human has never accidentally called someone by the wrong name?), but once you correct them, they do their best to remember and not repeat the mistake.

Mind you, I’ve encountered some people who refused to respect my decision. Distant relatives deliberately introducing me as “Emily Ashcroft” for the sake of image, despite knowing better. People who told me that I had to share my husband’s name, or he and I weren’t a true family. People who’ve lectured me on the importance of changing my name for my husband’s sake. For the record, he does not have a problem with my decision, though he initially leaned toward the idea of us coming up with a new name together, such as “Belcroft.” if anything, the fact that I didn’t take his name gives him some extra credibility with his progressive colleagues.

Some people’s resistance to my decision is shocking. Once, I attended a congregation where my husband and I taught a children’s Sunday School class, and two parents – two! – asked me to go by my husband’s name so that the 4-year-old Sunbeams wouldn’t think my husband and I were living in sin. As you can probably guess, the Sunbeams did not assume that we were having sex outside of marriage. All they cared about was coloring pictures of Jesus. And getting animal crackers.

The fact that their mothers would make such a request in the first place stung. Having two of them bring it up on the same day, but separately, made it clear that they’d criticized my choice in private.

Other times, the mistake comes from institutions that continue to promote sexist, outdated policies, often out of mere habit. The first time that my alma mater mailed a funding request to this mysterious “Emily Ashcroft” whom I’ve never met, I called and corrected them. For the next couple years, the mail was addressed to me and my husband, including my real name. So what happened with this last letter?

Well, when I called the university, a cheerful lady informed me in a friendly but firm tone that it was the university’s policy to have one of their employees manually replace a married woman’s last name with her husband’s “because it’s tradition.” To be clear, there is no system automatically making this change – they are informed by “someone” (and she was vague about who “someone” is but said it was not the Church) about new marriages and then immediately put in the effort to change their female alums’ names, without their consent.

Strangely, she wasn’t the slightest bit apologetic about it and didn’t seem to see any irony in telling me that they were too busy to call a woman and ask before changing her name but not too busy to hunt down news of the marriage or make the change in the first place. I’ll also point out that this organization is not too busy to call me, each and every year, requesting donations.

Even worse, when I asked why they had reverted to an inaccurate name despite my phone call two years ago, here’s what I learned: the person I spoke to two years ago never corrected my name in the system’s records. They continued to list me by the inaccurate name. However, they added the note, “prefers to be addressed by maiden name.” When this department changed over to a new information system, the inaccurate name carried over, but not the note.

There’s a lot that I could say about institutional sexism and the way it drives default options in software and record-keeping. In fact, there’s a lot I said about this topic four years ago, when I first got married.

But putting aside all that stuff for just a minute, I want to make one thing unequivocally clear: no woman “keeps her maiden name.” A maiden name is the name a woman gave up when she got married and changed her name. The fact that she is married doesn’t automatically mean that her birth name is now her maiden name. It only transforms into a maiden name if she replaces it with a new, married name.

Already I can hear people saying, “But I know a woman who kept her name, and she refers to it as keeping her maiden name.” Sure, you probably do. And most likely she says it that way because it’s the easiest way to explain to you what she means. And perhaps, a few decades back, that really was the best way to refer to it. I recall using those same words 26 years ago in kindergarten, when I met a girl whose mom and dad were married but had different names.

But here’s the problem with perpetuating that term: it adds a constant qualifier to the woman’s name. It implies that the only legal name she has ever had is not her real name, but merely her “maiden name.” So when someone says, “Emily prefers to be called by her maiden name,” what they’re really saying is that I prefer to go by a fake name, an inaccurate name, a name that’s out of date. So no wonder the employee at my alma mater didn’t bother correcting my name when I complained two years ago.

Think I’m reading too much into it? Then consider this – not once has anyone said to my husband, “Oh, you kept your bachelor name.”

I’m just – plain – me. With the only name I’ve had for my entire life. It’s blissfully simple: Ms. Emily Belanger. Same before I got married, and same now. You can add in my middle name or my middle initial if you want, but the first and last name are non-negotiable. The beauty of this name is that it doesn’t tell people a thing about my marital status any more than my husband’s name reveals his.

I have one name.

It is not, and never will be, my “maiden name.”

April 3, 2018
Another First: An Apostle in an Interracial Marriage
Next Post 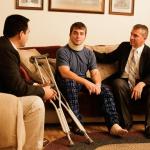 May 27, 2018 Making Ministering Holy
Recent Comments
0 | Leave a Comment
"For some reason, this article popped up in my feed just today. I can't imagine ..."
trytoseeitmyway The Women Who Enable Abusive Men
"In response to a 2012 atheist billboard I wrote the following about it saying the ..."
DisqusIMO On Mormons and Planets
"Season 4 of Fargo--where Timothy Olyphant plays the Mormon lawman Deafy and Chris Rock plays ..."
xert Mormon ‘Niceness’
"I pretty much wrote the exact same thing about my husband's "bachelor name" back in ..."
Brita Long No, I Did Not Keep My ..."
Browse Our Archives
Related posts from Peculiar People