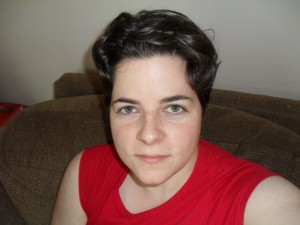 Hello! My name is Melissa and I was raised believing there was only one right way to live and that was Patriarchal Fundamentalist Quiverfull Christianity. I was homeschooled and home churched along with my many younger siblings, and I did my best to learn how to be the woman I believed god wanted me to be. I married young after a purity culture parent supervised courtship, and we started our family right away. My husband first studied to be a minister, and then served as the pastor of a church.  I took care of the house and the rapidly arriving babies.

Then pretty much everything changed.

I acknowledged my depression and got help for the first time. I quit spanking my kids and began my journey into gentle parenting. Our marriage became more and more egalitarian, and I began to question a lot of my beliefs. My spouse came out to me as transgender, causing me to question and investigate everything I had been taught about sexuality and gender and finally be OK with my own sexuality. And eventually, we left ministry, moved, and came out of the closet together.

Hopefully this explains why you will find a variety of perspectives in the archives: if you go back to the beginning, you will find a conservative Christian investigating the Catholic church, whose structure and ritual had some appeal compared to an upbringing where “each man ruled over his own household”. Later you will find an increasingly disillusioned woman wrestling more and more with incongruities and conflicts involved in believing in god, and dealing with the pain and issues caused by a fundamentalist upbringing and beliefs. And more recently you will find the dreaming and discoveries of a newly out lesbian and agnostic as my wife Haley and I, together with our four small children (Ms Action 6, Ms Drama 5, Ms Pooky 4, and Mr Punk 2) start our lives over again after eight years of marriage.

I no longer think there is only one right way to live. Now instead of living life in fear of making the wrong choice and feeling as though I was never good enough, I start each day new. Asking questions but not feeling as if I must have every answer, seeking balance but embracing uncertainty, and learning to accept and respect others.

Please join me as I remember to give myself Permission to Live.