Indeed, All Are Precious in His Sight

Sophia was about a year old when we visited our friends for dinner in Malden, Massachusetts.  She sat in a booster chair that was strapped to a larger chair, and I sat beside her on her right.  We had noticed that her face seemed flushed a few minutes earlier, but she was happy and active.  Then, as we sat for dinner, I noticed that she looked straight up — up — and up — looking at the ceiling, and then looking past the ceiling until she was, arching backward, looking at the chair behind her.

For just a moment, I thought she was just being her usual spirited and playful self.  But she stayed that way.  And when I tried to bring her head back forward, I found that her back and neck had gone stiff.  Her eyes were rolled backward and she was unresponsive to my voice.

“Something’s wrong,” I told my wife as I began to unstrap her from the seat.  I picked up my daughter as her little body stayed stiff as a board and her eyes still flickered back into their sockets.  Her forehead was burning, so I soothed her and asked for a wet towel to cool her forehead.  Her eyes were vacant, and I had no idea whether she heard me, but I imagined her somewhere deep inside her body, my voice drifting down to her as though through water — and I hoped that my voice and my words would assure her that everything was all right.  Soon, I was holding her in the cold car ride to the hospital.  Her body slowly began to revive.  The first to revive was her mouth and throat, and it sounded like she was choking.  I suddenly realized I hadn’t even considered whether or not she was breathing, and I thought I might have to perform CPR.

As it turned out, Sophia was fine.  She continued to recover; at first she was dazed, then she cried.  But she was back.  Her temperature was coming back down, and it was the temperature spike that had induced the seizure (a seizure without shaking is called a petit-mal seizure, as opposed to a grand-mal seizure).  She was fine.  No damage done.  But I remember sensing the vast ocean of grief that awaited me if I lost her — and feeling keenly that all my happiness hung by a spider’s thread.

Once you become a parent, you never respond in the same way to stories of other children who suffer.  My father is in Haiti, and my mother related the story of one child in a refugee camp there who was treated medically because he had, in his hunger, eaten dirt.  Can I imagine my own child so hungry that she would have to eat dirt?  My friend just returned from India, and he told me of children Sophia’s age begging on the streets.  So I imagine Sophia standing barefoot in the streets of New Delhi, her face smudged with dirt, her hair caked with mud, and her eyes sunken from malnutrition and despair.

In the same way, I cannot help but respond when I see stories like that of Chrissie, a 5-year-old adoptee from Serbia with a severe heart defect.  Recently her heart (and at least one lung) failed, and she was “dead” for 20 minutes.  I cannot help but feel the grief of a father when he sees his little girl like this: 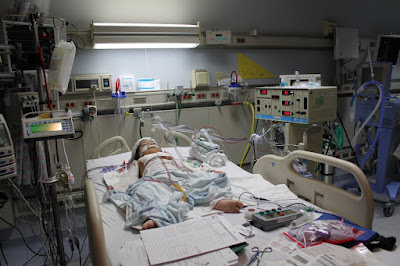 Her parents are remarkable.  This is their latest message:

“Chrissie is in about the same condition as she was last night.  She’s in a comatose state (medically induced), hooked up to life machines.  She’s being given 100% oxygen, body at 92 degrees trying to foster minimal brain activity as the machines do their work to keep her alive.  No one on earth knows how long she will be in this state.  But our God does, and we are trusting His sovereignty, grace, and love wholeheartedly.

“While I’m updating, in your prayers for Chrissie, would you please also mention two kids having open-heart surgery today with the same cardiac surgeon and cardiologist?  Both have pulmonary atresia (part of what Chrissie has).  One is a newborn, and the other is a 10-year-old who is having a “fixer-upper” surgery to replace some parts that they put in a long time ago.

“We know Chrissie is a fighter, our Serbian Sensation.  We’re begging her to fight, fight, fight.

“We know God is the Healer, our Jehovah Rapha.  We’re begging Him to heal, heal, heal.”

Please take a moment to pray for Chrissie and her family, and read their story here.