The Accidental Radical: A Conversation with Richard Foster, the Wisdom Chaser

I’m sorry to have posted sparsely this week. My newborn is facing some health complications — yet she seems, thankfully, to be pulling through. (You may also note that there are some changes to the blog, including the URL. We have a redirect established, but please take the time now to update your bookmarks or subscribe or connect with me through Facebook or Twitter. Thanks)

This is the third, final — and, in my opinion, most profound — installment in my interview with Richard Foster.  You can see Part 1 and Part 2, and you can also see our Book Club conversation with Foster’s Sanctuary for the Soul, which includes a great video interview as well.

It strikes me as we’re speaking that the category of “wisdom” seems to be rarely discussed in Christian circles today. Why is that?

There are a number of factors. Let’s take the idea of Jesus as the great teacher of life. It’s been lost to us because of the battles of, say, the liberals and fundamentalists in the early part of the twentieth century when the liberal folks would say that Jesus is the good teacher. They didn’t mean by that that he was the master of life; they meant that he said some nice things. So fundamentalists distanced themselves from the idea of Jesus as teacher. As a result, the whole concept of Jesus as the Teacher of Life got lost to us. Instead of seeking out the wisdom of Christ, his insights into life and how to live, we sliced and diced the words of Jesus — as though, if we could figure that out, then we’d have mastered Jesus. But that’s far from wisdom.

There are a couple of books out now on Julian’s Showings. One is an imaginary biography of her life, because we don’t know anything about Julian. The other looks at the theological insights of Julian. Well, yes, but what about the life that Julian had and how those revelations of divine love informed her life? In my opinion, these books totally miss the point of this woman. We don’t value wisdom.

My son Nathan and I, for about a decade, climbed mountains together in Colorado – the 14,000 footers. In the beginning of that, I asked him to give me a trail name. I explained to him, on the Appalachian Trail, you take a trail name. He said he had to think about it. We hiked together for ten years, and finally he says, “I’ve got your trail name.”

“What is it?” I asked.  He answered: Wisdom Chaser. He published a book under that name: “Wisdom Chaser: Finding my Father at Fourteen-Thousand Feet.” In that decade, because I hike very slowly, it gave us lots of opportunities to speak and listen to each other. He would open up a lot of things that aren’t even in the book. But he shared a lot. The wisdom. The spacious intimacy that we learn to give to each other, so that he has space to grow and develop and be who he is.

There is a lot of talk these days of making our faith, or our lives of faith, more “radical.” It sounds dynamic and exciting, even sensational or heroic. Yet the life of faith you’re describing sounds very humble, even quiet. Is there any fear that young believers (in particular) who pursue a “radical” faith could view themselves as the heroes of their own story? Is being “radical” the point? Isn’t radicalism something that follows of its own accord — if it follows at all — from the imitation of Christ?

I think you see it right. Think of the narcissism of our day, that is so imbibed into young people. When you said that people would see themselves as radical, that’s the Achilles heel of this. If you’re really radical, you’re not concerned that anybody sees you. So all of that kind of egotistic, narcissistic stuff, you begin to put that to death.

Let me tell you a story.

Part of the process that I had to go through for a period of time there was to let go of my need to be known or to be important. My publisher wasn’t especially happy that I had stopped. They were good about it, but I told them I wouldn’t do anything. I had to be hidden for a time. But there was this kind of interior crucifixion of all of that stuff. The period lasted about a year and a half. Then it seemed like that was done. I had gone through what I needed to go through.

When those crazy men and women went into the Egyptian Deserts, they weren’t trying to get noticed for anything. They were just trying to follow Jesus.

As for the concept of imitation, consider the Brethren of the Common Life. We don’t even know whether Thomas a Kempis wrote that book, The Imitation of Christ. And he didn’t care whether anyone knew that he was the author. In that community, they were learning to imitate Jesus as best they could. They made lots of mistakes, of course. But anonymity was part of the deal, to not be known, and to not make an impact. And of course they made the most profound impact.

You think of dear old Mother Teresa. She went over to Calcutta and disappeared from history for a long time. Then God raised her up and she had quite an influence. I remember meeting with Macolm Muggeridge, and him talking about his first meeting with Mother Teresa. The BBC called him up and said, “We have this kind of crazy nun here. Would you interview her?” He goes there and he’s absolutely blown away. He did that film, Something Beautiful for God.

Just talking with him, and his wife Kitty, about their encounter with Mother Teresa, was astonishing. Here’s this wrinkled up old nun who had one of the largest influences in our lifetimes. That’s radical. But now, there are ten thousand Mother Teresas that we’ve never heard of, who continue to just be obscure and that’s okay with them. That’s part of it.

Radical, radical, radical. Well, let’s be faithful. How about that? Isn’t faithfulness good enough? And like you say, the tradition, the imitatio tradition is one of the great spiritual traditions in the Christian faith. Up until a century ago, that book was the unrivaled book on the spiritual life.

There was a little group called the Brethren of the Common Life. The Imitation of Christ book came out of the experience of that group. It was just their common experience. It’s a little like Bonhoeffer’s Life Together. He wrote it, but he was describing the experience of that little group in Finkenwald. He had them meditate upon a passage of scripture, faculty and students alike, for half an hour every day, and for one week on the same passage. Monday through Friday, they’re all meditating on one passage for half an hour every day. The little book Life Together came out of their experience. Think of what an influence it’s had. And this is a little group of German seminarians.

And of course he’s teaching on the Sermon on the Mount, so that book — what we call The Cost of Discipleship — he was teaching during those years at the underground seminary the Nazis eventually closed out. That’s radical. 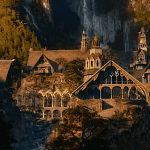 Evangelical
Spiritual Life in the Age of Machines --...
Philosophical Fragments