My post on “Sex at Seminary” has prompted some angry responses.  I’m hardly the ideal person to express these things.  It will be hard for people not to read the post through the lens of identity politics.  I am an evangelical, and a conservative, making some critical comments about a Mainline Protestant seminary where the prevailing culture is further to the Left.  I would caution, however, against dismissing a critique because of the identity of the critic.  I really did not mean for those words to wound or offend.

More surprising to me is the amount of very positive feedback I’ve received, from evangelicals and non-evangelicals, liberals and conservatives and others in between.  It seems that many have had similar experiences, at a variety of seminaries.  It’s been a blessing to hear their stories.

Amongst those who took offense to the article were several who believed I was griping because I’d had a bad experience at Princeton Theological Seminary.  They must have thought my comments in praise of PTS were merely pro forma.  Yet that’s not so.  Why would I feel sour grapes?  PTS gave me a very generous fellowship, freedom to take the classes and internships I wanted, several awards along the way, and the pedigree to go to the doctoral program of my choice.  I made there some of the best friendships I’ve enjoyed in this life, and enjoyed some excellent mentors.  All those things really do redound to the praise of PTS.

Let me tell a little story — for this series on The Future of Seminary Education — that illuminates some of the critique I’ve already shared, but also some of why I nonetheless enjoyed my seminary years.

I’ve mentioned that there came a time, one month before a spinal fusion surgery, and about halfway through my M.Div., when I was confronted with the fear of death.  Recently married, I was lying in bed beside my wife after she had fallen asleep.  I thought of how much pleasure it brought me, simply to lay beside her.  I envisioned lying beside her as the seasons, the years and the decades passed by, as our bodies changed and we grew older together.  Then, I thought, we would pass away, and eventually we’d be buried beside each other as well.

That’s when I sat bolt upright with waves of scalding heat rolling across my skin and a heart that felt like it would pound its way through my chest.  It literally felt as though the sky was falling down toward my head.  I was suffering a panic attack.  I had thought of a wall of earth separating me in my coffin from my wife in her coffin — and the thought of the separation death would impose filled me with terror.  I had not been afraid of death for years.  Yet now I was married.  Now I had something to lose, something from which — or someone from whom — I did not want to be separated.

By then, my spiritual life had already been in decline.  I had strayed from God in my first couple seminary years.  I had largely abandoned my vision of intimacy and faithfulness with God.  But when life was easy, the cost of my infidelity to God had not been apparent.  Yet now I needed God, and it felt as though he were miles away, not because he was unfaithful but because I had been unfaithful.  I had neglected the fundamentals of my faith, the spiritual disciplines, the basic everyday faithfulness, the impassioned pursuit of God and not merely the study about him.  I never had sex or did drugs in those years, but when it came to drinking I was very much a part of an unhealthy, un-Christian culture.  Even as I ministered in my internships, as a youth pastor and a prison chaplain, I partook in the drinking culture at seminary, and in foul language and unclean talk.  Those internships were the most spiritually edifying parts of my seminary experience, but they were not enough.

Suddenly that decline became a steep and dizzying downward spiral.  The month before my surgery was filled with doubt and fear and more panic attacks.  Was God trying to tell me that I was going to die?  That I needed to prepare my heart?  Then came the surgery, and a horrific recovery experience that was badly mismanaged by my medical team.  I spent the first two days after the surgery with no pain medication, and then got so much medicine that it proved toxic and plunged me into severe dysphoria.  It was the most profound experience of hopelessness and godlessness that I had ever known.  It felt as though my faith was broken into a million pieces and I had to put it back together again — or else leave it behind.

I sought encouragement from the professors.  They were kindly available, and offered answers that were nuanced and theologically respectable — but missed the mark.  I sorely missed the extraordinary James Loder, one of the professors I had grown close to, but who had died by then from a brain aneurysm.

But the benefit of my PTS years was not only in the faculty I came to know, but also in the students.  At about this time, one of my best friends, J., had gone to a month-long Ignatian retreat.  When he returned, we got together.  As he described his retreat, I kept hearing a particular word — a word that surprised me, a word that I had not heard or spoken so openly and frequently for years.

Do you want to know what the word was?  Jesus. 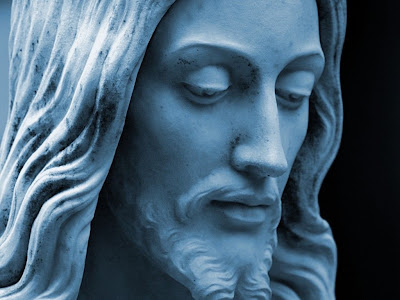 I had stopped saying the word “Jesus.”  95% of the time, I only spoke of “God.”  Or if I had to speak of him, I referred to God the Son, the second Person of the Trinity, the Logos…names that sounded intellectual and sophisticated.  If I had to speak of the Son incarnate, then I spoke of Christ, or the God-man.  Never Jesus Christ, and certainly never just Jesus.  Loving Jesus, following Jesus, seeking Jesus — these were the province of fundamentalists, Bible thumpers, Jesus Freaks, crude Christians who wore WWJD bracelets and listened to Michael W. Smith and read Max Lucado instead of Jurgen Moltmann.  We had even begun to subtly mock Jesus by talking of “Jeebus” or mocking the way certain preachers shouted “Jesus!” in their sermons, or by laughing at Jesus action figures and the other strange cultural artifacts emanating from Jesusland.

As I sat there and heard my friend talking about Jesus-this and Jesus-that, I realized that Jesus was speaking to me through him.  Wasn’t there a time when I, too, walked and talked with Jesus?  Wasn’t there a time when I lived in fellowship with Jesus?  And wasn’t that, after all, the very point of Jesus?  That he is “God with us,” God made present and available and redemptive among us?  Because of Jesus, God is a Person-for-us, God is personally available, and we can indeed have a personal relationship with him?  Isn’t that the point of the incarnation?  Isn’t that, in some sense, the point of our faith — that God came to us in Jesus, and bids us come and die with Jesus, and calls us to be Jesus in the world and to love Jesus in the least of these?

For two years I had scoffed at things like this.  It seemed simplistic and sentimental.  But really, it’s the simple, heart-changing truth, a truth that confounds the wise and lifts up those the world calls fools.  I had left behind the language of Jesus, the spirituality of Jesus, and I had certainly left behind the imitation of Jesus.

That was the beginning of my long climb out of the pit.  I began once again to talk with Jesus throughout the day, to find him sitting in the chair beside me, or walking with me down the side of the street, or speaking to me in the words of a stranger or in the music played at a youth group meeting or in the sunlight that filtered through the trees or just in the stillness of my heart.  I had to trust my imagination, put aside my corrosive skepticism, and just experience Jesus (and God in Jesus) again.  And I would never have known J., never would have heard his story, if it were not for PTS and the extraordinary group of men and women it brings together.

Mine was not a continuous, uninterrupted ascent back to spiritual health.  Nor was it quick.  There were fits and starts for years.  But that moment was the beginning of the rebuilding.

A Christian never outgrows Jesus.  Jesus is and remains the heart of the Christian faith.  So I began to speak of “Jesus” again even in circles where it caused embarrassment, deliberately using language that made me humble myself, because coming to God through Jesus requires sometimes that we look like fools to the world.  Besides, it served to remind me that God is not away up there, somewhere above the spheres, manipulating the world through a million long levers.  God is here, among us, beside me, with me, before me, behind me, all around me and within me, talking to me, showing me the way and the truth and the life, in the person of Jesus.

Not the Son of God.  Not the Logos.  Not the Second Person of the Trinity.  Just Jesus.

October 29, 2011
How Different Denominations See Each Other
Next Post

Evangelical
Is the Church a Family Anymore?
Philosophical Fragments