Harold Camping Statement: “There is other language in the Bible that we still have to look at…” 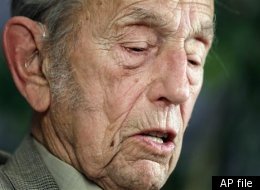 For a time, after October 21st, there was no record of Harold Camping’s ill-fated prediction on the Family Radio website.  Reference to the supposed doomsday had been scrubbed, and in its place was a general encouragement to be ready for the time of the Lord’s return.  At the same time, it was falsely reported in a “Harold Camping Exclusive” in the Christian Post that Harold Camping was retiring from leadership at Family Radio, on the basis of a claim by Brandon Tauszik, a “documentarian” who presented himself as a member of Camping’s “church” and a sort of chronicler of Camping and Family Radio.  Tauszik displays pictures of Camping and his followers at his website.

It now appears that Tauszik was an interloper, representing himself falsely in order to enter into Camping’s inner circle.  The Christian Post was duped:

Espinoza also claimed that Tauszik used deceit to enter the Camping’s Alameda, Calif., home and interview the radio evangelist and his wife, Shirley, and that he was asked to leave after it was suspected that he might be a reporter.

“Brandon misrepresented himself in order to enter the Camping’s home. Within 5 minutes they realized he was a reporter and politely asked him to leave. They did not tell him Mr. Camping is going to retire,” Espinoza contradicted the documentarian in the email.

I was duped too, alas.  I wrote a very brief summary piece for World Magazine that assumed the Christian Post had the story right.  Unfortunately it already went to press and is too late to correct.

According to his daughter, Camping is staying on as General Manager of Family Radio ministries.  Also, Family Radio recently posted an audio message from Camping.  I’ve rendered a transcript below (emphases are obviously mine):

We are living in a day when one problem follows another. And when it comes to trying to recognize the truth of prophecy, we’re finding that it is very, very difficult. Why didn’t Christ return on October 21? It seems embarrassing for Family Radio. But God was in charge of everything.

We came to that conclusion after quite careful study of the Bible. He allowed everything to happen the way it did without correction. He could have stopped everything if he had wanted to. I am very encouraged by letters I have received and are [sic] receiving at this time concerning this matter. Amongst other things, I have been checking my own notes more carefully than ever. And I do find that there is other language in the Bible that we still have to look at very carefully and will impinge upon this question very definitely. And we should be very patient about this matter.

At least in a minimum way, we are learning to walk more and more humble before God. We’re ready to cry out, and weep before God, “Oh Lord, you have the truth. We don’t have it. You have the truth.” This is another place where we have to cry out for it. There’s one thing that we must remember. God is in charge of this whole business and we are not. What God wants to tell us is His business. When He wants to tell us is His business. In the meanwhile, God is allowing us to continue to cry to him for mercy — oh my, how we need his mercy — and continue to wait on him. God has not left us. God is still God. But we have to be very careful that we don’t dictate to God what He should do.

In our search in the Bible, we must continue to look to the Bible, look to the Bible, because there is where truth comes from. And God, in his own timetable, and in his own purposes, will reveal truth to us when it’s His time to do it. In any case, we do not have to have a feeling of calamity, or a feeling that God has abandoned us. We are simply learning. And sometimes it’s painful to learn. We are learning how God brings his messages to mankind. And my, my, we have claimed to be a child of God, and therefore as we search the Bible, we’re bound to feel the darts of the Lord as sometimes He gives us the truth and sometimes He gives us something that causes us to wait further upon Him.

Whatever we do, we must not feel for a moment that we have been abandoned by God, that He is no longer helping us or interested in us. Oh my, what an encouragement it is to be able to go to the Lord again and again. “Oh Lord, I don’t know anything. Lord, you teach me.” That’s the attitude that has to be a part of each one of us. God will not abandon us. He will provide. But we have to be just very careful that we don’t dictate to Him when that has to happen.

Incidentally, I have been told that I had said, back in May, that people who did not believe that May 21 should be the rapture date probably had not become saved. I should not have said that, and I apologize for that.

One thing we know for certain: that God is merciful. Merciful beyond anything that we would ever expect, and so we can pray constantly, and should be praying constantly, “Oh Lord, we look to thee for thy mercy, and we’re so thankful that we know that Thou art so merciful.”

How wonderful to know that God is still on the throne. That He is King of Kings and Lord of Lords. And that He hears every one of our prayers. And let’s not hesitate. Let’s be, if anything, let’s be praying more than ever for God’s mercy and keep praying, and God will provide. But God is in charge, and we must always keep that in mind.

I doubt that Harold Camping will ever issue a definitive date for the doomsday again.  But it sounds as though he’s not giving up on a fundamental error: that there are secret, esoteric codes hidden within the Bible that provide us with the dates for major events, including the eschaton.  Rather, it sounds as though he’s suggesting that he simply didn’t take all of the data into account, that he’s now discovering “other language” that “we still have to look at.”

Harold’s now 90 years old, and many people develop some rather…different ideas when they get older.  Unfortunately, Harold’s a 90-year-old with a microphone, so his errors were broadcast to the world.  We may hope that he’ll make any future errors in the privacy of his home.  And while he has not, to my knowledge, apologized for those he led astray, he issues a partial apology here for criticizing those who did not believe him, and for what it’s worth he sounds thoroughly humbled.  That’s not a bad place to be.

As we say for princes and paupers, lords and the lowly: may God have mercy on his soul.

November 6, 2011
The Canary in the Mineshaft: The Poisonous Climate of the Pro-Choice Movement
Next Post

Evangelical
Harold Camping's Statement: What Should it Say?
Philosophical Fragments

Evangelical
On Harold Camping and May 21 - Readers...
Philosophical Fragments
TRENDING AT PATHEOS Evangelical