Jeremy Lin and the Soft Bigotry of Low Expectations

Sometimes compliments are the worst insults.

In early 2010, back when he was a Harvard phenom, I had the privilege of interviewing NBA basketballer Jeremy Lin.  We were still building this crazy thing called Patheos, so I met Jeremy at his dorm and used a $150 HD camera.  I presented the interview in text form (see Part One and Part Two) because Jeremy spoke in an immobile monotone.  Even so, Question 1 of my homemade interview has gotten over 36,000 views.  Suffice it to say that Jeremy Lin has a following.

He particularly has a following amongst Asian-Americans.  And some Asian-American young men, long stereotyped as timid and unathletic, nerdy or effeminate or socially immature — have fought back tears (which may not help with the stereotype, but is understandable under the circumstances) as they watched Jeremy Lin score 25 points, 7 assists and 5 rebounds for the New York Knicks.  Here are the highlights, but the lowlights are the pseudo-compliments from the commentators, whose astonishment at Jeremy’s success speaks volumes:

I loved watching Jeremy’s aggression on the court and his enjoyment of the game.  I loved seeing his teammates’ celebration, since Jeremy has obviously won their hearts with his courage and kindness.  I did not love the belittling comments.  Now, I’m always reticent to cry “racism,” and I won’t cry “racism” in this case.  The commentators are not showing hatred of a race.  I won’t even call it bigotry — at least not bigotry outright.  If anything, they’re showing what President Bush famously called “the soft bigotry of low expectations.”  Their astonishment at the sight of Jeremy Lin outperforming the other players, their consistent references to how exhausted he must be, and how “magical” a night he’s having (rather than a natural result of talent and hard work) suggests that they’ve bought into the stereotype of the physically inferior Asian-American male.

[Update: Yes, I know they have other reasons to be surprised by his big night — he’s never played so much and never scored so much in a single game.  I may be being unfair here, but I still hear echoes here of the same kind of “low expectations” that Lin has had to deal with, as an Asian-American basketballer, throughout his entire career.]

I grew up in the Bay Area with a Korean adopted sister and best friends who were Chinese, Japanese, Korean and Filipino.  I married an extraordinary Chinese-American woman, and thus joined her family and community (amongst whom I now live).  Even though I’m Caucasian, I’ve been around Asian-American communities long enough to see that Asian-American men and women face different stereotypes and different challenges.  Asian-American women by and large have a positive, helpful image in American society.  Although some Asian-American women will complain about stereotypes of submissiveness or nerdiness or asexuality, so many Asian-American women have become doctors, lawyers, reporters and businesswomen that they’re generally seen as intelligent, professional, attractive, friendly, and relatively innocent or untainted by bad attitudes and bad influences.  Even positive stereotypes can be confining, of course, but they’re better than negative ones.

For Asian-American men, in contrast, the positive stereotypes are few: they’re good at math and good at short-people sports like table tennis and gymnastics.  The negative stereotypes are legion: they’re the geeky, socially inept guys with coke-can glasses in the engineering labs; they’re the perpetual adolescents playing video games on their super-computers at thirty or forty years old; and they’re the physically and sexually immature, small and timid young men who can’t talk to girls and get their second jobs before they get their first kiss.

Like most stereotypes, these come from somewhere.  Recent generations of immigrants from Asia have come from the wealthy and the educated, so that the families who make it to the United States are among the most intelligent and ambitious that Asia has to offer.  Of course they tend to be successful.  If it was only the most athletic Australians who could manage the immigration experience, then Australian-Americans would tend to be athletic at a higher percentage than Americans in general.  Also, the sons of immigrants from Asia are pressed by their parents (and by their own sense of filial duty) into careers that are secure and financially rewarding, like engineering and medicine.  (Daughters are typically allowed to take a little more risk.)  Some Asian-American men grow up in ethnic enclaves where they’re relatively sheltered because their parents are (with great justification) suspicious of American cultural influences.  And they may begin romantic relationships later because their culture encourages them to focus first on their education and professional development.  Isn’t that a good thing?

But stereotypes are stereotypes because they’re intellectually lazy generalizations that only tell a part of the story.  They feed more off our ignorance and our fears than our knowledge and understanding.  The stereotypes I listed above do not describe the Asian-American men I know, or only offer a profoundly caricatured description of one part of their character. 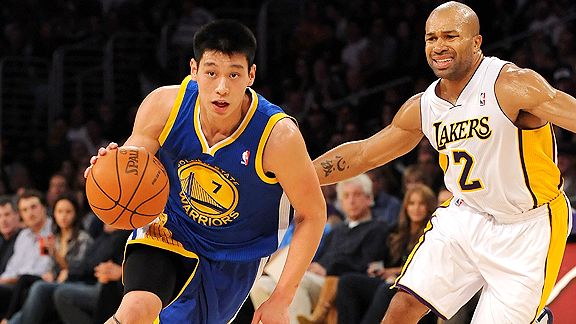 Jeremy, like many Asian-American male athletes, is consistently underestimated.  Great basketball players don’t come from Harvard for a very simple reason: because great basketball players don’t go to Harvard in the first place.  They’re recruited by Duke or Kansas or UCLA or UNC.  A high school basketball player with Jeremy Lin’s statistics should have been recruited heavily by the nation’s top programs.  But Jeremy Lin was unrecruited and had to send video tapes and pitch himself.  He performed brilliantly in college, and many college coaches kicked themselves for overlooking him.  Then he was undrafted for the NBA — but performed well in the Summer League and was picked up by the Warriors.  Arguably, there are reasons he was overlooked other than race.  Jeremy isn’t the flashiest player; never the tallest or strongest guy on the court (he entered high school 5’3″ and 125 lbs), he has had to add layer after layer of skills and strategies and basketball intelligence.  But still, someone with his track record, someone with his statistics and all around game, would have gotten more notice if he weren’t a relatively small, baby-faced Asian-American in a league that has hardly ever seen an Asian-American succeed.

Jeremy is not Yao Ming, a 7’6″ freak of nature with tree-trunk legs who could have an impact even if he was not terribly athletic or aggressive.  He’s 6’3″, broad-shouldered, 200 pounds, and 24 years old — but he looks a bit boyish next to the towering hirsute beasts of Eastern Europe.  But that’s part of what’s great about him.  Jeremy cannot depend on his size.  He has to depend on skill, speed — and fearlessness.  Jeremy looks at the guys on the court, 5 inches or 10 inches taller than him, 50 pounds or 100 pounds heavier, and he can’t wait to take them on.  And he often beats them.

I asked Jeremy whether it felt like a burden to carry the hopes and expectations of so many Asian-American men upon his shoulders, and he answered that he couldn’t play for other people.  “I can’t even play for myself.  The right way to play is not for others and not for myself, but for God.  I still don’t fully understand what that means.  I’m still learning to be selfless and submit myself to God and give the game up to Him.  My audience is God.”  He does, however, have a responsibility to be a “godly role model,” and when I asked whether it would please him if his success shattered negative stereotypes of Asian males, he broke into a big smile.  “I would be pleased,” he said.  “Absolutely, I would be pleased.”

February 3, 2012
An Appeal for iam2.org: Matching Our Best Technologies with Our Best Intentions
Next Post