Some of you already know the reason why I haven’t posted to the blog in recent weeks.  An exciting opportunity dropped into my lap, and pursuing that opportunity has been exhausting, exhilarating, and edifying (alliteration unintentional).

Here are the deets.  I was asked (through my agent) on February 15th about writing a book — on an expedited schedule — on Jeremy Lin.  It was understood that various authors (some of whom specialize in “crash books”) would be rushing to market to tell Jeremy’s story.  Most (actually, to my knowledge, all) of the authors had no connection to Jeremy, and a handful did not share his Christian faith.  The publisher wanted something more substantial, less tabloid-y than the other products would be, and something that reflects seriously on Jeremy’s faith.  Since I had interviewed and written on Jeremy previously, I was approached.

There was never a proper proposal, but we had a couple publishers bidding and came to terms with the original publisher, Hachette. 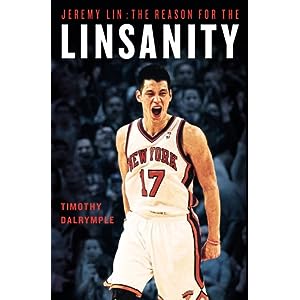 So, in the end, I agreed to do it.  In fact, it’s done.  I had three weeks to write the book.  By the grace of God, and with the assistance of friends and family, it came together beautifully.  I sought to tell the story in a way that’s true to Jeremy, that honors his family, and that glorifies the God he serves.  “Jeremy Lin: The Reason for the Linsanity” will be in bookstores in mid-to-late April, under Hachette’s Center Street imprint — in the Sports section at Barnes and Noble.

I’ll write a couple posts over this week and next that explain my decision in greater detail — why I think sports matter, how they can be sources of spiritual growth both for athletes and for fans, and so forth — but I wanted to answer some shorter questions in a single post:

1.  Why are you writing a crash book about an athlete?  Don’t you write more about theology and politics?

I write in multiple genres, about anything I find compelling and important.  For those who don’t know, I was a junior national champion gymnast and my experience in gymnastics was one of the most powerful formative influences on my faith.  Ever since, I’ve been keenly interested in the ways athletes live their spiritual lives and their athletic lives together.  That’s why I interviewed Jeremy in the first place, and why I interviewed other athletes and coaches, like Dominique Moceanu (gold medal winner with the Magnificent Seven in 1996), Tony Dungy (Super Bowl winning coach), Michael Chang (French Open winner and a trailblazing Asian American athlete), Nick Harris (NFL punter, now with the Jacksonville Jaguars), Samantha Peszek (silver medal winner with the US gymnastics team in Beijing 2008), and so on.  I love stories like that of Sally Ward, a rhythmic gymnast who felt called by God to leave the sport even as she reached her peak and was Olympics-bound — and Kim Anthony, an African American gymnast who rose out of deep poverty through her athletic gifts and now serves with Athletes in Action — and Ryan Mossakowski, a high school football star in Texas with character in spades — and Stephen McCain‘s spiritual journey (even though it greatly differs from my own!) through gymnastics.

Jeremy Lin is not an insta-celebrity, a sort of NBA version of Paris Hilton, famous for being famous.  The seven-game winning streak he pulled off between February 4th and February 15th was a legitimately stunning athletic achievement, a spectacle of the highest order, and a deeply revealing moment for our culture.  Even better, the story of how Jeremy came to the NBA is just as miraculous as the story of what he did once he got there.  I had a chance to tell a great story of faith and perseverance, a story that would reach around the world and potentially have a great impact.  I couldn’t pass it up.

2.  Did you have Jeremy’s cooperation?

The short answer is no.  Jeremy and I were corresponding as the Linsanity began, making arrangements (with Jeremy and his very kind manager) for another interview.  However, digital books were being released that made a hash of his life story, and reporters were doing everything but digging through the family trash bins in search of more information about Jeremy.  A piece in the New York Timesrevealed his parents’ bankruptcy.  This was a loss of face for his family, and I think the parents — Jeremy’s mother Shirley in particular — were frustrated, overwhelmed, and felt as though they were losing control of the narrative.  So I was told that they were drawing back from cooperation with any books until they had the time to evaluate their options and choose the way in which they wanted to tell their story.  That makes perfect sense.

Sooner or later, Jeremy will write his own memoir.  It will be fantastic.  He has a compelling story to tell, and he can tell that story with greater detail than anyone else.  What I produced — as you will see — is quite different.  In a way, I’m glad I was not coauthoring a memoir with him.  When you coauthor a memoir you have to write in the celebrity’s voice, and you’re rather limited to their ideas or ideas you can coax out of them.  I was able to write in my own voice, with my own perspective on his life, his explosion onto the public stage, and what it reflects about life and faith, ethnicity and community.

I did have the cooperation of Jeremy’s friends, mentors, youth pastors and pastors — some of whom were my friends already.  Since I grew up in the Bay Area, attended Stanford (Jeremy’s home church is a few miles from Stanford, and some of my college friends attended the church), took my doctorate at Harvard, and have spent significant portions of my life in Asian American Christian circles, we have overlapping social circles.  So there are many stories and anecdotes in the book, and much more detailed accounts of his spiritual development and his high school and college basketball careers, than have appeared anywhere else.

You noticed!  I am indeed a whitey.  No denying that.

I was as careful as possible with regard to Jeremy’s experience as an Asian American and his importance to Asian Americans.  In large measure, on this issue I drew on the perspectives of leaders in Asian American ministry — people like Soong-Chan Rah, Tom Lin, Ken Fong and my dear friend Kathy Tuan-MacLean.  I had extensive conversations with Michael Luo of the New York Times and Jerry Park of Baylor.  The book features quotations from spades of others on Asian American issues — Helen Lee, Phil Yu, Jon Chang, Jay Caspian Kang, Jeff Yang, and more besides.

I don’t know why (though I think his race comes into play here) everyone seems to assume that Jeremy is playing on borrowed time.  He’s talented enough, fast enough, agile enough, and (more recently he became) strong enough to be a successful player in the NBA for a long time.  He’s taller than the average NBA point guard, and compares favorably with the top guards in speed and agility tests.  More important, he has the passion, commitment and work ethic to continue improving his game, to counter the defensive adjustments made against him, and to find ways to help his teams win.  I think ESPN’s Johnette Howard gets this right.  On the basis of his talents and abilities right now, Jeremy can average 8-12 assists and 15-20 points per game.  On a team where he’s the first scoring option, his points would be higher and his assists lower.  But lots of teams would love to have a point guard who averages (say) 18 points and ten assists per game — and this is Jeremy’s floor.  He’s the kind of athlete who will only get better with time.

However, the book focuses on the seven-game winning-streak in which Jeremy burst upon the world stage, and looks back from there upon Jeremy’s life and how it prepared him for that moment.  It does not presume that he will be an All-Star, and it tells an interesting story that remains interesting whether or not he’s topping the search engines at the time.

I saw an article recently that quoted Alan Goldsher, a ghostwriter who produced an e-book on Jeremy in 72 hours of work.  He did not seek to publish a print version of the book because the turnaround time would have been at least three months, “but probably more like six, so we’d be looking at an October release date.”  And, he said, “No editor would take a chance on that, especially in light of Jeremy’s limited body of work.”

Actually, the team at Hachette has been fantastic.  They’ve greased the skids to get the book out in April, and frankly it’s not much of a risk for the publisher, given the intense interest in Jeremy in China and Taiwan.  Due to the sales of the foreign rights, the book is already a financial success before it’s even hit the store shelves.

The more fundamental point, however, is that Jeremy has an extraordinary story already.  In fact, he had an extraordinary story even before he became a starter for the Knicks.  So hopefully Jeremy will be leading the Knicks in the playoffs at the time the book comes out.  But even if he’s not, it’s a great story that brings out a lot of important issues.

5.  Can anything good be written in three weeks?

You might be surprised.  I probably averaged 16 hours of work per day on the book.  Over 21 days, that’s 336 hours.  I employed several people for help with outreach and research.  So let’s say that it came out to 360 work hours.  I had to pull together resources, conduct interviews, write and edit.  If I’d had 1000 work hours, I could have agonized over word choices and added greater detail here and there, and written a longer book.

So no, I’m not expecting a Pulitzer for a book I wrote in three weeks.  One has to dial down the editorial voice in order to write that quickly.  But I actually consider it a minor miracle how well it came together.  Once I made a strategic decision regarding the structure of the book, the whole thing wove together as though it had a will of its own.  Honestly, it felt providential.  I had resigned myself to releasing a book I didn’t particularly like, but which I thought was good enough “under the circumstances.”  I don’t feel that way at all.  It’s not perfect, but I love the book, and I think you will too.

(As a friend pointed out to me Monday, it’s already available for pre-order.  And the release date will be updated soon.)

It’s important that we lift up stories of people who bring character and faith into the arena, people who show courage and diligence and perseverance in order to make an impact.  It’s vital to have stories like this in our culture.  And it’s a hell of a story.  I can’t wait for it to come out.  I think you’ll really enjoy it.