We live as exiles. We’re called to be pilgrims.

I am journeying through Scripture chronologically in order to explore our exile experience. I’ll also offer some helpful thoughts about how Christ can reshape that identity and reorient our journey so we live as pilgrims. To read earlier posts in the series, go to the “Blog Categories” pull-down menu in the right column of this screen and click on “Pilgrim’s Road Trip”.

It’s not like the twin cities had been such a great environment for her family. They’d lived there as outsiders, which was fine with her husband, Lot, but maybe it hadn’t been so fine for Mrs. Lot. Though Scripture doesn’t give her a name, some rabbis refer to her as Idit. The family had been on the move for a long, long time – first leaving Ur to settle in Harran, then on to Canaan before Lot separated from his Uncle Abram in order to better provide for his own. Though the grazing was good, the social climate in their new neighborhood was, to put it mildly, not very hospitable to the God-fearing family. Uncle Abram had interceded for Lot’s family, and for anyone else in Lot’s neighborhood who reverenced God, but the sad reality was that Sodom and Gormorrah were not interested in being saved from the destruction coming their way. While still in Sodom, before a single sulfurous spark was ignited, Lot pled for the lives of his family. These nomads were about to become exiles. In his mercy, God granted Lot and his family a place of refuge.

As soon as they had brought them out, one (of the angels) said, “Flee for your lives! Don’t look back, and don’t stop anywhere in the plain! Flee to the mountains or you will be swept away!” (Gen. 19:17)

One simple instruction that should have been a no-brainer for Mrs. Lot to follow became her undoing: “But Lot’s wife looked back, and she became a pillar of salt.” (Gen. 19:26)

Why did she do it? Why on earth did she look back when she was specifically instructed not to do so?

Was it curiosity? Longing for soon-to-be family who’d laughed off the words of warning and stayed behind in the doomed city? Unhappiness at being uprooted from a place that had come to feel like home after a lifetime of wandering? Disbelief?

Though Mrs. Lot can’t answer the question, each one of us probably can. When I’m on the road away from a bad place, situation or relationship in my life, I’ve looked back with regret, rehearsing what I could have done differently. I’ve looked back with sadness, grieving the finality of things that can never be redone. The ugliest versions of a backwards glance have come when I’ve looked back with anger at the wrong I’ve experienced, and my heart instantly becomes a Quentin Tarrantino flick, filled with thoughts of revenge.

Those backwards glances hijack my journey. Oh, unlike Mrs. Lot, I may have the liberty to keep moving, but my steps invariably follow this pattern: 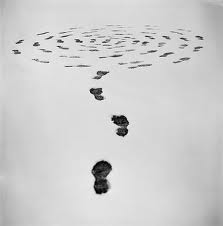 While there are important and productive ways to process the past (through prayer, through conversation with others, through journaling), there are also the kinds of backwards glances that turn us into a salt dough zombie. This “walking in circles” is exile gone stuck and stagnant.

Historians believe that the towns of Sodom and Gomorrah were on the Jordanian side of the Dead Sea, the lowest point on earth – a region today filled with eerie, bleak NaCl mineral beauty. 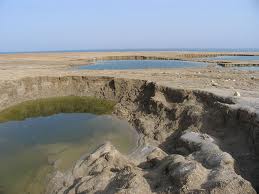 An exile couldn’t survive in this harsh, vegetation-free climate for long. That’s the point, I think. Obedience to God forces our eyes forward (“What’s next?”) rather than allowing us to dwell in an unhealthy past. Looking forward will create a pilgrim out of an exile – even an exile who is walking in circles.

Have you ever gotten stuck in the past? What has helped you get “unstuck”?

Do We Really Want Everything That...
Cranach
Related posts from Pilgrim's Road Trip