Because we’ve traveled to Israel five times during the last five years as part of my husband’s board responsibilities with The Caspari Center for Biblical and Jewish Studies, people ask us a lot of interesting questions about the region. Number one is “Isn’t it dangerous there?” On the heels of that question is often some variation of “Do you think there’s any hope for peace in the region?” This query may take the form of a personal confession, as in, “I really don’t understand why things are the way they are over there. It’s so complicated!” 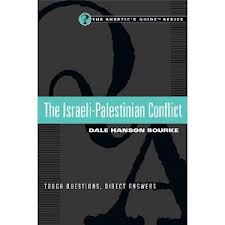 Dale Hanson Bourke has written a guide that attempts to untangle thousands of years of that complicated history and today’s seemingly-intractable current events in a Q & A format. The Israeli-Palestinian Conflict: Tough Questions, Direct Answers (IVP, 2013) is one of the books in the new Skeptic’s Guide Series. This 144-page book attempts to provide user-friendly (but not easy) answer to questions like these:

Bourke explained how she recognized the need for a fact-based primer. “At the mere mention of Israelis or Palestinians, some of my most mild-mannered friends moved from placid to angry…It seemed like many people had strong opinions – on both sides – and wanted to tell me what to believe.” She continued, “But I wasn’t ready to take sides. I wanted to understand the basics first.” The basics include definitions, geography, history, governments, an introduction to basic Israeli and Palestinian concerns and a look at other players shaping policy and politics in the region.

One expert told her, “You will know you have succeeded in being fair if you make both sides angry.” Bourke’s goal wasn’t to anger anyone, but to encourage both sides to listen to one another.

Reading the book was a bit of a Rohrschach test for me. What would I see in the answers to all those questions filling its pages? Though I am unsettled by unblinking, unquestioning Christian Zionism, I am even more unsettled by those who diminish or flat-out deny Israel’s legitimate security concerns in order to stand in solidarity to the Palestinian communities in Gaza and the West Bank. Lynne Hybels, who has been  outspoken in terms of humanitarian concern on behalf of the Palestinian community on the West Bank, wrote the forward to the book. She first brought her friend Dale Bourke to visit the region with her, so I will admit to having my guard up as I read. I’ll admit I wondered if the book would be subtly (or not so subtly!) “pro-Palestinian” in its tone.

I am very happy to report that The Israeli-Palestinian Conflict is focused on facts, and the sources Bourke referenced are balanced evenly among centrist/moderate experts on both sides of the issue the book addresses. This is a worthy, user-friendly beginner’s guide to the places and peoples who are at the center of Scripture’s story and, usually, the headlines on tomorrow’s newsfeed.  Recommended.