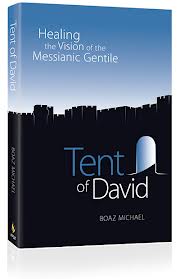 “I wish I were Jewish. I just love the Jewish people!”

When some Christians learn I am a Jewish believer, they begin to gush their love of of all things Jewish to me. Some have stories of beloved Jewish doctors or accountants. Others share their deep political allegiance to modern Israel. Still others believe that they may have had a Jewish relative who hid his or her identity in order to survive the Holocaust or duck anti-Semitism in this country.

Of this group, there are a few who’ve taken these feelings and translated them into some sort of action, perhaps attending a Messianic congregation and/or digging deep into Jewish roots study materials. The more they learn, the more frustrated many of these well-meaning people become at how the big “C” Church (and usually, whatever local congregation they may have attended in the past) has moved away from her Jewish roots.

I may share many of those frustrations, but have always felt uncomfortable with the zeal and lack of humility among these brothers and sisters. Not too long ago, in fact, I met a Gentile woman who’d been attending a Messianic congregation and she told me with great pride that she felt she was more Jewish than I was because I attended a church. (Um…no.) Most of the Gentiles I’ve known who’ve embraced their Jewish roots aren’t quite that obnoxious, but the dissonance between what they’re learning on their own and what’s being taught and practiced in their churches can create all kinds of friction for everyone involved.

At long last, there is a resource to which I can point these folks, as well as to suggest to church leaders who may be navigating these issues with some in their congregations. Messianic Jewish believer Boaz Michael, of the Jewish roots teaching ministry First Fruits of Zion, has written Tent Of David: Healing The Vision Of The Messianic Gentile as a call to maturity to Jesus-following Gentiles who’ve embraced some form of Jewish roots inquiry or practice. Though a few Gentiles may find Messianic Jewish congregations are the community to which God has called them, most “Messianic Gentiles”, as he dubs them, belong in churches: “The Messianic Gentile is the most likely person God can use to bring the message of Yeshua’s Jewishness and the continuing role of Israel and the Torah to the believing members of the nations – that is, to other Christians.”

Unfortunately, some of these Messianic Gentiles become divisive and insufferable:

A Christian will be turned on to the feasts and festivals or to the dietary law, but instead of joyfully embracing the mitzvot, they grow resentful toward their communities, pastors, and fellow congregants. Instead of modifying their trajectory slightly to accommodate the new information they have received, they begin trying to change course entirely, and question everything. In a tragic display of controntational bias, these well-meaning believers become open to any new information –  right or wrong – that undermines their former way of life, while shutting out anyone who tries to keep them on course.

Michael’s message to these folks is that while he agrees that the church needs to change in some key areas, she is not the enemy. He tackles those areas (remembering that Jesus is Jewish, the proper valuing of national Israel, the kingdom message of the gospel) and addresses some of the undeserved criticisms that overzealous Messianic Gentiles have lobbed at the church. These includepaganism, antinomianism, and doctrinal division.

Christianity is, has been, and will always be the locus for believing Gentiles. Engaging Christianity will in almost every case be a far better us of time and resources than trying to build an entirely separate edifice or plant a new kind of church, as Christians are already interested in the Scriptures and already have a connection to Yeshua.

The bulk of the book, then, is an apologetic toward loving engagement with fellow believers. Though Michael has headed a Jewish roots teaching ministry for years, he attends a church, and has had to live out the principles he shares in Tent Of David. Instead of winning debates about various issues of doctrine or practice, he urges Messianic Gentiles to honor their new convictions by living lives marked by winsome and humble service to their brothers and sisters.

Though the book targets a very specific audience, it struck me that the principles in the book would serve anyone who finds that their growing convictions about anything from home schooling to Calvinism to worship music styles to…well, you get the idea…would benefit from considering how to put self-sacrificing love into practice by using this thoughtful, well-organized volume as a playbook.

For those interested in learning more about past and present issues faced by the Messianic Jewish community, I’d like to commend to you Chosen To Follow: Jewish Believers Through History And Today, a collection of thoughtful articles on the topic, published by The Caspari Center for Biblical and Jewish Studies, the Jerusalem-based ministry with whom my husband and I serve.

August 23, 2013
The Transformative Heart Of 'What Not To Wear'
Next Post