Some People Are Meant To Stay Behind The Scenes In Life

It should be obvious to anyone who meets me that I am a graduate of the Wendy Ward Charm School program.

Reality: No one will ever mistake me for either Miss Manners or America’s Next Top Model. Wendy Ward fail.

Two things from my sojourn in the Wendy Ward program have stuck with me through lo, these many years. The first is the fact that I learned to do a runway-perfect 3/4 pivot turn. Not exactly a skill I rely on in daily life. Or ever. Something tells me if I attempted a couple of these catwalk moves back-to-back today, I’d probably end up in a hospital emergency room. 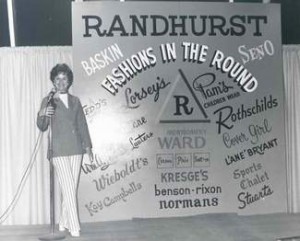 The second thing that I carried with me for many years was a single sentence the program director said to me. There was nothing I wanted more than to be poised and pretty, and I’d hoped that maybe Wendy Ward could transform me. The classes, taught by Mrs. B, a well-groomed woman who’d once been a model, coached insecure junior high girls like me in areas like how to walk and sit, apply make-up, make small talk at parties and more. I’d completed the program and asked Mrs. B if she thought I was ready for the Wendy Ward big leagues – the Pacesetters. The Pacesetters were the girls who modeled in the Randhurst mall fashion shows and did a variety of PR-type events in for the Montgomery Ward department store that sponsored the program.

“Oh no,” Mrs. B exclaimed, a well-trained smile not quite masking her look of horror at my request. “Some people are meant to stay behind the scenes in life.”

Throughout my life, some important people in my life made sure I knew that there was a quite a list of things wrong with me when it came to my looks – the size of my nose, the birthmark on my face, my Brillo Pad curls. At first, Mrs. B’s words were just another voice in the chorus telling me that I wasn’t pretty or desirable. Later I realized how much Mrs. B’s assessment of me silenced me.

Her words kept me off the runway, which, given my propensity for public displays of klutziness, was for the best. (Another Wendy Ward fail.) I did have a brief tenure as a behind-the-scenes Pacesetter, answering the loading dock phone or handing out cheese and sausage samples to customers on Saturday afternoons until I took the hint and resigned.

Mrs. B’s words influenced the way I used my voice for years to come. I believed I had no choice but to live a behind-the-scenes life. I avoided public speaking. I wrote plays instead of acting in them. I served in the shadows at church. (Of the latter, please note that I believe it is good for each one of us to serve far from the spotlight/microphone, no matter how public and visible our ministry is – but I can say that there was a part of me that stayed far from the stage because Mrs. B had sized me up and found me inadequate.)

It took a bulls’-eye accurate prophetic prayer by someone who didn’t about know this story to expose the effect Mrs. B’s careless words had on my soul. False humility isn’t humility at all – it’s a warped form of pride. As I wriggled free of those words, I cherished the fact that I was free to follow Jesus everywhere – both into the shadows and onto the stage to serve him. In both places, I have the exact same purpose. I am called to teach and encourage those around me, serving them with the gifts God gave me to give to them.

Have you ever had an experience like this – someone who told you you didn’t measure up to an artificial standard of beauty or performance? If so, what did it stop you from doing in your life?