Why should the devil have all the good music?

If those words immediately trigger a memory for you of a live performance of Larry Norman pounding on a piano a la Jerry Lee Lewis, you might be an aging Jesus Freak. While religious and social historians who study such things are divided on whether the Jesus Movement of the late 1960’s–early `70’s was indeed American’s fourth great awakening, those of us who came to faith during this hurricane of the Spirit recognize that it was, at the least, a time of intense spiritual activity that upended everything it touched.

Dr. Larry Eskridge, himself a product of the Jesus Movement, has penned an engaging and accessible 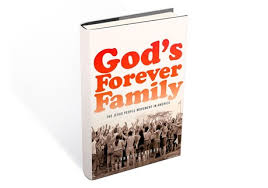 history of this period entitled God’s Forever Family: The Jesus People Movement In America (Oxford University Press, 2013). This work was Christianity Today’s book of the year*, and traces the movement to its beginnings in the fertile ground of Hippie Central in San Francisco.

It was ground Evangelicals of the day had initially shunned over concerns about the moral anarchy taking place among a counter-culture that scared the apple pie out of mainstream America – and that mainstream included lots of wholesome, conservative church-going believers. Eskridge digs back to the very beginnings of this movement in 1965, when God broke into Ted and Liz Wise’s regularly-scheduled program of hallucinogenic drug-imbibing, hippie Ted showed up at the straightlaced Baptist church his wife Liz had recently begun attending, marched up to the front of the church during the altar call and announced, “Jesus Is Lord”, followed by “He is back”. Though altar calls are all about these moments, the freaked-out congregation didn’t have any context for how they were supposed to respond to a profession of faith from someone who was still on an LSD trip. But Wise’s conversion was real, and his changed life and his energetic evangelism was the spark that got a fire going.

Eskridge follows the flame into Haight-Ashbury and then into Southern Cali over the next couple of years, then traces the spread of the movement via coffeehouse, commune, concert, and one-to-another testimony across the country (and beyond), showing how the movement dovetailed with mainstream Evangelical youth culture in the early 1970’s, changing the course of the latter even as the flames of the the former dissipated. I’d never considered the Jesus Movement as something other than Evangelical youth culture though I knew its roots were in the tie-dyed soil of the flower children. Eskridge’s careful documentation of the way in which the movement took hold helped me better understand that there was a Jesus Movement, and then the movement of the Jesus Movement as the church absorbed the movement.

He documents the cults that grew like tares in that fertile soil, such as Mo Berg’s Children of God and the cultish excesses, such as the Shepherding movement (to which I referred here a couple of days ago, and to which Eskridge tags as one of the factors contributing to the end of the Movement). Whether it is the rise of CCM, the changes in worship style in many congregations, or the size and influence of Jesus Movement churches like Calvary Chapel and Vineyard or post-Movement churches like Willow Creek, none of us in the church have been left unchanged by the Jesus Movement.

I commend this readable book to you if you lived through this era, particularly if you came to faith as a result of the Jesus Movement. And I commend the book to you if you weren’t born yet. This story is your story, too – even if you aren’t a fan of what was constructed (the CCM and church growth industries, for instance) in the wake of the Movement. Gaining a deeper understanding how we got to where we are today is a gift of God’s Forever Family, as is remembering what it is like when new wine bursts old wineskins in a messy, glorious, organic manner.