They leave the security of family and community to travel to the ends of the earth in the name of God. Destinations for these emissaries have included Bangkok, Salt Lake City, Alaska, Russia…just about anywhere there is a possibility they can be used to reconnect someone with God. They maintain their own unique lifestyle based in religious observance though this means they almost always stand out, peculiar people, in their adopted hometowns. They know they may never return to the comfort of their own community again in their lives, but have counted the cost, and value their message more than their own personal  comfort. Their single-minded commitment draws some and alienates others.

Christian missionaries? No, but their story offers followers of Jesus an interesting mirror from which to consider our own outreach efforts. Sue Fishkoff’s book The Rebbe’s Army: Inside The World Of Chabad Lubavitch (Schocken/Random House, 2009) is a compelling look at a movement that is characterized by aggressive and contemporary outreach to other Jews by a group who seems to be locked in another time, place and culture – say, 19th century Lithuania or Poland, which is where the movement gained steam, or the Orthodox enclave of Crown Heights, Brooklyn, which is where it is headquartered today. 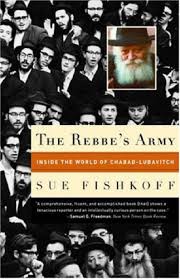 Fishkoff’s profile of the Chabad Lubavtich movement, a sect of Orthodox Judaism that blends elements of mysticism with strict Torah observance. Lubavitchers have been led by 7 charismatic rabbis. The last official leader of the movement was Rabbi Menachem Mendel Schneerson, who died in 1994. Even without a central leader, the movement has continued to grow in the wake of Rabbi Schneerson’s death. Many of Rabbi Schneerson’s followers view him a Messianic figure (some believe he is the Messiah himself), since in both life and death he inspires and empowers them to do everything in their power to turn other Jews back to God, which they believe will serve to repair all of creation.

The Rebbe’s Army describes the fanatical devotion of Rabbi Schneerson’s followers, who still write him letters, pray at his grave, and savor every word he ever wrote. This devotion has led his followers to do Jewish outreach with a zeal not typical of much of the rest of the Jewish community – certainly not the Reformed or Conservative movements, and not most of the Orthodox groups, either. Fishkoff describes many facets of the Lubavitchers’ outreach efforts including creating Chabad Houses on college campuses to connect with Jewish students, presiding over public menorah lightings at Chanukah, holding Seders in far-flung locations in Asia where many young Israelis head after they’ve completed their mandatory military service, and connecting with politicians and patrons who can fund their cause and advance their agenda – Jewish or not. But the heart of the Lubavitchers’ efforts can be characterized by the work of Yossi Greenburg, who lives in Anchorage, Alaska. 1,500 Jews live in the city; another 1,500 live scattered around the rest of the state. Once a month, Greenburg takes a two-hour flight in a puddle jumper, then a 40-minute drive to the town of Sterling to tutor a 14 year-old boy to prepare him for his bar mitzvah ceremony. And Greenburg does it all without charge to the boy’s family.

Fishkoff, a journalist, tells compelling stories to give readers a peek inside the Chabad world. The Publisher’s Weekly review of the book captures the flavor of her storytelling: “Though Fishkoff makes an effort to include some individuals’ critiques of the movement, this is by no means an expose; one leaves the book sharing her own tender admiration for the energetic dedication of the Rebbe’s followers.” For me, this was the book’s weakness. I would have appreciated a bit of balance to the mostly-glowing descriptions of Chabad life – perhaps a chapter or two devoted to those who’ve left the movement, struggled with its interior culture, or failed on their mission.

I’ve heard Christian missionary stories since nearly the very first day I came to faith in Jesus my Messiah. The narrative – leave everything, move to a far-away land and do whatever it takes to help someone connect with God in obedience to Jesus’  command to go as his ambassador to the ends of the earth – is as familiar to me as names like Hudson Taylor or Amy Carmichael. Though there are differences a-plenty between the Lubavitchers’ beliefs and those of a “lifer” cross-cultural Christian missionary, what struck me as I read were the similarities: giving one’s life over to God’s service with the single-minded purpose of helping others know and follow him. It was an unexpected challenge to my own faith, and a reminder that I have been called, not to comfort, but action; to march in the footsteps of my resurrected Redeemer.

January 7, 2014
Does Biblical Community Happen When You Live Where Everyone Knows Your Name?
Next Post