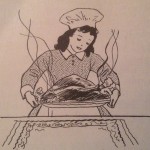 I’ve always loved reading old cook books. My mom hated to cook, so our weeknight dinners when I was growing up were usually broiled steaks with iceberg lettuce salads and Green Giant frozen vegetables in rotation with Chinese take-out, McDonald’s, or pizza. Long before I was first introduced to cooking in my middle school Home Economics classes, I was reading recipes in the Good Housekeeping magazine that arrived in our mailbox each month. We had a few mostly-unused cookbooks on a shelf in our kitchen cabinent, including an old Settlement Cook Book. This book, with the subtitle “The Way To A Man’s Heart”, was first published near the turn of the last century by a Milwaukee woman named Lizzie Black Kander who worked with with new immigrants in a social work effort modeled on Jane Addams’ Hull House in Chicago. Though the book is not a Jewish cookbook per se (lots of ham and shellfish recipes in there, for starters), Kander’s work focused on helping the flood of new immigrants into her community assimilate into American culture. An NPR story on the classic book noted:

For recent Jewish arrivals from Eastern Europe, The Settlement Cook Book was an instruction manual for the American kitchen and an introduction to American life. These immigrants looked, dressed, worshipped and even ate differently than did the established — and often prosperous — German-American Jews of Milwaukee, who feared that the new arrivals would pull them down and even inspire a new wave of anti-Semitism.

“Certainly there was true philanthropic goodness,” says Nora Rubel, who teaches the history of religion at the University of Rochester in New York. “But I think there was also an underlying concern that if they didn’t Americanize they would reflect badly on the Jews that were already there — partly because they were so visible.”

Kander created a one-stop encyclopedia of information included hundreds of recipes, menu suggestions, canning instructions, infant feeding recommendations and more. For me, the book was a window into the lives of my grandmothers. They had to build a fire to use their stoves, kept food in the icebox, and cooked from scratch because there were no plastic bags of Green Giant vegetables in their freezers. The Settlement Cookbook referenced the mix of Eastern European Jewish flavors I’d tasted in the kitchens of my grandmothers: homemade strudels, kugels, kasha and matzo balls graced their tables along with convenience foods like jarred gefilte fish and bakery-bought rugelach. And the cookbook helped its readers understand how to cook the kind of American foods their new neighbors were eating such as the oh-so-exotic Spanish rice, pork roast and shrimp cocktail.

I could leaf through the book, and imagine what it was like for them when they were young wives and mothers, cooking meals for their families. I could travel through time back to the 1930’s, `40’s or early `50’s to watch over their shoulders as they diced onions and kneaded dough to feed their families.

My mother-in-law passed her own 1938 copy of the book on to me years ago. I happened across it the other day as I was digging through a box of books. As this is a time of year when many are rifling through their recipe boxes to make recipes that taste like memories, I thought I’d share a few gems from the book just for fun.

Is there a recipe from grandma or a traditional food that graces your table at this time of year? It wouldn’t be the holidays without…what? Please share your answer in a comment below!