I’m a sucker for all the year-in-review lists that pop up at this time of year. I’ll read with glee those wry month-by-month summaries of the past year like Dave Barry’s annual column, or those annual lists of the worst movies of the year (or ever made, which will no doubt be rejiggered to include this stinker). Maybe it’s because as the calendar year winds down we’re all prone to a bit of reflection before we dive head-first into our regularly-scheduled lives again. Or maybe it’s because I like to measure the opinions of others against my own. Or maybe it’s because I’m supposed to be writing a book, which means I’m easily distracted by the endless buffet of Buzzfeed quizzes (“I’m Melanie from Gone With The Wind! I knew it!”) popping up in my Facebook feed. Year-In-Review lists often fit this category, but I think they can also serve as a bit of a Selah as we take some time to consider what we’ve gained, what we’ve lost, and who we’re becoming as our lives move through time. They can also become matters for prayer or action.

So, in the spirit of “if you can’t beat `em, make a list of your own”, here’s my own two-part review of the year.

First, in no special order, are the news/cultural events that hit the closest to home for me this year. In every case, some aspect of these stories carried into 2014 from previous years (or millennia, as the case may be). And in every case, these stories will carry into 2015:

The Intractable: The summer’s war in Gaza was a PR boon for the terrorists in Gaza, who managed to convince Western media of their victimhood in the conflict.

The Heart-rending: The rise of ISIS and the resulting tidal wave of refugees across the region are sowing the seeds for an even larger crisis. I don’t think it’s a question of “if”, but “when”. Stories of brutal persecution of Christians by ISIS caught our attention, briefly. The people who’ve borne witness to horrific events are the ones who should be forming our understanding of what it means to be the church in the world that is being reshaped by the rise of Islamic fundamentalism.

The Worrisome: Newsweek’s July 29th cover showed a young Jewish woman holding a suitcase accompanied by the words “Exodus: Why Europe’s Jews Are Fleeing Once Again”. The rise in anti-Semitism in Europe isn’t news, but the sharp spike in violent incidents like this one, in conjunction with events across the Middle East, reads like writing on the wall. Instead of “Mene Mene Tekel Upharsin“, the letters spell “WAKE UP” to Jews and committed Christians alike.

The Infuriating: Mars Hill Church in Seattle exported a strange brew of a particularly agressive, testosterone-fueled fundamentalism blended with beer drinking, tats and swearing. What they were selling, aggressive young wanna-be pastors were buying, thus spreading the Mars Hill culture like a virus across Evangelicalism. Meanwhile, those who’d been wounded, marginalized and exiled from that culture reported stunning levels of spiritual abuse…and they were silenced and shamed for years. Thank God for the internet, which allowed victims and critics to find another, band together, and speak truth to power. Too bad it took so darn long for some measure of justice to come.

The Inspiring: Pope Francis shows his true colors, which look a lot like the colors Jesus wears. He touches the untouchable, tools around Rome in a Ford Focus, and kneels to wash the feet of juvies. Go, Papa Frank!

The Stunning: The police shootings leading to the deaths of Michael Brown and Eric Garner and the unbelievable decisions of grand juries in Ferguson, MO and New York City stating that there wasn’t enough evidence to send the officers responsible for pulling the triggers in these cases to trail exposed our culture’s blinds spots when it came to both issues of personal responsibility and the systemic, historic sin and injustice embedded in our culture. While there were some rioters exploiting the chaos following these events, particularly in Ferguson, there were were others who showed up to march peacefully in solidarity, helped clean up after the riots and committed to working for change. But the rage and desire for revenge loom large. On Saturday, a gunman killed two Brooklyn police officers execution-style as payback for the deaths of Brown and Garner. 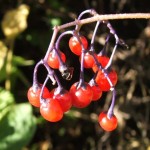 On a personal level, this year has been a bittersweet one.

Our daughter divorced after more than ten years of marriage. Her ex-husband is the primary caregiver for their two  children, and my husband and I have been actively involved in helping him out by caring for the boys a couple of days a  week  through most of this year. Bill and I have learned in new ways this year that sometimes love looks a lot like just  showing up. No one involved in this situation will ever be the same, but we are not without hope, precisely because the  One who is Love keeps showing up, too.

There has been much sweetness in addition to that deep sorrow. My husband recently started a new job with a company spun off from his former employer. Both of my sons are currently working on their Master’s degrees while working full time. My older son’s wife, a gifted vocalist, works full time, attends school part-time, and in her spare (!) time, launched a small bookkeeping business.

I’ve been a writer for many years, but struggled for years to land another book publishing contract after the small publisher with whom I’d been working when I wrote my parables books went out of business during the recession-on-steroids of 2008-ish. I was overjoyed when Beacon Hill Press green-lighted If Only: Letting Go Of Regret during the summer of 2013. The official release date was July 1st, and it was a long-held dream of mine to have a book release party so I could say thank you to those who believed in me and my work. It was a joyous event, though when it came time to say a few words, I was so overcome with emotion that I forgot 98% of what I planned to say. It was fun doing blog, article and radio promotion for the book, and I prayed that the effort would put the book into the hands of the readers who most needed to hear its redemptive message. (Watch this space next week, as I’ll be giving away some free copies to help launch 2015!)

Christianity Today magazine gave If Only an Award of Merit in the Christian Living category on their 2015 Book Award list. It wasn’t all that long ago that I was working at the bookstore at Trinity International University creating sales displays for the books included on this important yearly list. I have a very big imagination, but I never could have dreamed this week’s honor. Never. Ever. Wow.

I’m grateful most of all for the nearness of God throughout this bittersweet year. The valley of the shadow seems as though it might be a permanent mailing address, but the people living in this neighborhood – family, friends, my writing community – have reflected the love of Jesus, and reminding me in countless ways that even my darkness is not void of light to him who created the light.

May this season with its long, dark days be filled with the light of the Messiah. God’s blessings to you and your family this Christmas and always, friends.

In him was life, and that life was the light of all mankind. The light shines in the darkness, and the darkness has not overcome it. – John 1:4, 5