Fifty Shades Of Not Okay

My father taught me how to ride a bike, the value of a great punchline, and what a woman was supposed to look and act like.

My dad was a great guy with a bad habit. 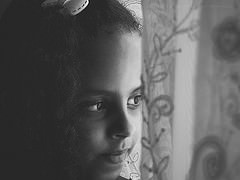 The coffee table reading was only the tip of the iceberg in our home. I can still remember the shock waves that hit me when I discovered the cheaply printed hard-core erotica stashed in my parents’ bedroom. I was 11 or 12 when I discovered a stash of the stuff in my dad’s dresser drawer and nightstand. Whenever my parents left the house, I pored over each plain-wrapped volume. I didn’t fully understand what I had read, but I knew that I’d been initiated into the world of adulthood at an age when I barely understood the mechanics of how babies were made.

February 17, 2015 Burying My Alleluia?
Recent Comments
0 | Leave a Comment
Browse Our Archives
get the latest from
Evangelical
Sign up for our newsletter
POPULAR AT PATHEOS Evangelical
1