When we were in high school, we’d compare notes about everything from boys to menstrual cycles to math homework. Of the six of us girls, five of us were brand-new followers of Jesus. We learned something about walking with him by following each other. For one brief moment in time, we were even all enrolled at the same state university.

When I got engaged, my girlfriends told me I was getting married “first”. We were in the habit of measuring ourselves using each other’s lives as rulers. Though some of the relationships among this sextuplet have faded over the last four decades, it’s a testimony to God’s faithfulness when I contemplate that all six of us are still following him. Some of us first came to him and each other out of homes defined by abuse or addiction issues. Others among us were dealing with the fallout of their parents’ divorces. Our ad hoc spiritual sisterhood was the first glimpse many of us had in what the church could be as we carried each other to a place of safety in Jesus in profound ways during those early years.

I’m grateful for those friendships, as they’ve formed a foundation for every other friendship that’s come into my life since then. Though some of the relationships in this sextuplet have faded over the last four decades, I find myself still marking time by them. We’ve each had children, and have traced our parenting journeys in conversation and prayer with one another over the years. Some of our kids have become friends. Most of us have grandchildren at this point. There have been divorces and remarriages. Several of us have buried parents or other beloved relatives.

Four of the six of us, including Charm and Teri, the pair of identical twins in our group, have lost our mothers to breast or ovarian cancer. In their case, they’ve been caregivers for a grandmother as well as a mother who died of the disease. Charm is a breast cancer survivor as well. 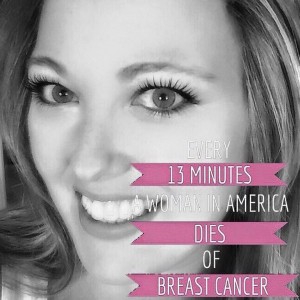 Even so, though some of these things have been incredibly difficult, none of them have come outside the expected order in which things unfold in life. Until last weekend.

Last weekend, Teri’s 29 year-old daughter Pam died of Stage 4 breast cancer. (I wrote about her initial diagnosis here). She leaves behind her legacy of faith in Christ in the lives of her young husband and two pre-school age children, as well as her family and many, many friends. She fought the disease like a wildcat so she could squeeze a lifetime of love into the time she had left on earth.

Death tears a hole in us, even when it is the quiet, unsurprising passing of a great-grandmother. But when a parent has to bury a child, as Teri and her husband will have to do this week, it is the most excruciating form of loss there is. It is life out of the normal sequence. Parents are not supposed to bury their children.

When Charm and Teri called for prayer after the doctors told the family there was nothing more they could do except to make Pam comfortable, I had a flashback to the three of us sitting in our Palatine apartment, laughing and talking the night I got engaged at age 19. We three “broke girls” were reveling in the trials and tribulations of early adulthood. A second flashback washed over the first one to the day Pam was born and Teri became a member of the mom club of our group. In a heartbeat, Pam’s lifetime had passed, and she was dying. Out of life’s standard order, and far too soon.

The measuring stick is irreparably broken.

There is the hope of resurrection, the promise of all tears being wiped away, the proclamation that death has been swallowed up in victory. While these things are true; truer than the sun shining in the springtime sky today, they are also not fully realized yet. What is true of today are Jesus’ tears at the grave of his friend Lazarus. What is true of today is that the One who knows the DNA of their unique grief is there in Houston with my friends right now.

If you’re reading this today, please take a moment and pray for God’s comfort to envelop Pam’s husband Tanner, her children Aubree and Jacob, for her parents and family members. Thanks, my friends.

April 8, 2015
Why We Have To Stop Telling Jewish Jokes
Next Post