Review: Lessons In Belonging From A Church-Going Commitment Phobe

I used to believe there was something deeply flawed about me because I’ve been a part of a number of different churches over the last four decades. Between the pastors who shamed people for being church-hopping consumers and some congregants I’ve met along the way who were able to stick with a church for life, no matter how dysfunctional it was, I chalked up my own rolling-stone resume to some deeply flawed part of my character. Not any more. This survey was an eye-opener for me. I discovered that pastors moved on from congregations with about as much frequency (and for the same sorts of reasons) as congregants did. I also considered how difficult some congregations make it for leavers, which serves to cement some people in place for the long haul. As a result, I set any self-examen aside regarding the topic of long-term commitment to a church. 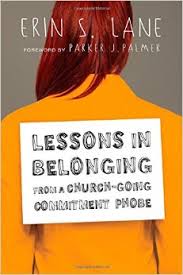 Erin Lane’s Lessons In Belonging From A Church-Going Commitment Phobe (IVPress, 2015) reopened the subject for me. Millennial writer Lane battles to learn how to trust a congregation when every bit of her life experience is telling her to keep them at arm’s length.

Middle-schoolers live close to the nerve of belonging. They can name its pain and pulses clearly. When popular research professor Brene Brown interviewed a bunch of eight graders about their definition of the word, they offered this distinction: Fitting in means I have to be like you. Belonging means I get to be me. Did you catch that little word ‘get’? To ‘get’ to be ourselves means that belonging is both a gift we receive and a pilgrimage we make. To be our authentic selves requires some getting to, some working out, some traveling toward as we discern the ‘me’ we get to be. Learning to belong is lifetime work.

Her childhood gifted her with both a vibrant faith in Jesus and a set of carefully-crafted “keep out” defenses. Some of those defenses came from the divorce of her parents and the upheaval of relocation. Other barriers to commitment for Lane came through cultural zeitgeist and the lack of rootedness that often accompanies the life stage of early adulthood. Lane and her husband Rush eventually landed in Durham, NC. Rush became a youth pastor. The logistics of his hours and the fact that the two shared one vehicle led Erin to decide to search for a congregation she could attend that was within biking distance of their home. It turns out the distance to church was the least of her challenges. Differences in theology, struggle to find common ground with others in the congregation, and her questions tapped into her discomfort with the idea of commitment to a church body. While some may suggest it is a false dichotomy for a person to say she loves God yet not have a strong commitment to a local church, I believe Lane’s battle to trust and belong is not a mark of weak faith, but of soberly acting out a prayer for healing and wholeness – the kind of wholeness that can only happen by being a part of a community. A kidney or a pinky toe does not serve any purpose in isolation. It only functions when it is a part of a body.

What insults do we hurl at the nail-pierced feet of Jesus? I try to think of some really gruesome ones, ones that would make most church folks blush, but when I finally settle on mine, it doesn’t sound menacing at all. Still, I know it would have crushed him as heavy as those thorns. “I don’t need your church, Lord. I’m all good.”

Lessons In Belonging ends without a tidy resolution. After months of weighing her commitment to a congregation, Lane decides against becoming a member. And then, the possibility of a second vehicle emerges, which would allow her to join her husband at the church where he serves. This ending was perhaps the most powerful bit of this valuable book. Lane’s honesty and depth give voice to the questions many are asking about what it means to belong to a church, and the Church. As the circumstances of our lives change (and they do, and they will!), so will our relationship with a local church. Each one of us will again need to figure out what it means to work out our salvation in community. Lessons In Belonging was a reminder for me that it is only worth expending energy to wrestle with things that really matter – and the Church, in all her clumsy, broken beauty – matters for all of eternity. It is fashionable, and theologically accurate to say we don’t go to church, we are the church. However, we still need a band of brothers and sisters to fully express this reality. If you’re struggling with what it means for you to be a part of a specific local expression of the church, this book is a very worthwhile read.

Note: I received a complimentary copy of this book from the publisher. The price I didn’t pay for the book didn’t affect my opinion of it. (Double negative, which is a positive in this case.)

May 31, 2015 Bring It To Light
Recent Comments
0 | Leave a Comment
Browse Our Archives
Related posts from Pilgrim's Road Trip