The church we currently attend* offers communion once-a-month-ish during its worship services. If a special event or speaker is slated, communion isn’t offered that month. Though I’ve spent four decades worshipping in mostly Evangelical churches, I’ve never bought in to the idea is a communion once-a-month post-script to the “real” worship service (sung worship, announcements, offering, and sermon). Passover Seders formed my context for communion, and time in Lutheran and Anglican congregations confirmed for me that communion wasn’t an add-on to a worship service, nor was it strictly memorial in essence.

My thoughtful writer friend Dorothy Greco recently posed a question on her Facebook page about which liturgical days or seasons are focused on gratitude. People weighed in with a variety of opinions ranging from Thanksgiving – which isn’t a date on the Christian calendar, but is certainly focused on gratitude – to Easter. As I reflected on my own experience immersed in calendar research for my book**, it occurred to me that the place in which gratitude was located in that calendar was in the very first “Christian” gathering that formed the foundation for the liturgical calendar – first day of the week gatherings where the predominately Jewish believers would come together to share communion and celebrate the resurrection. 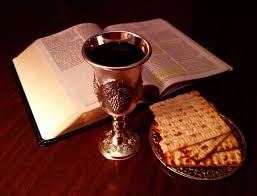 And he took bread, gave thanks and broke it, and gave it to them, saying, “This is my body given for you; do this in remembrance of me.” In the same way, after the supper he took the cup, saying, “This cup is the new covenant in my blood, which is poured out for you. – Luke 22:19-20

Because the theology around communion calls the elements and ritual strictly memorial in nature, most non-denominational, Bible, Baptist, Charismatic/Pentecostal and many Reformed don’t give much reverence or thought to it other than maybe what special music should accompany it. Even with a renewed interest in some of these circles in liturgy, it can be a hard sell to take communion seriously.

I appreciated Orthodox writer Rod Dreher’s post this morning called “Kill Your Megachurch Worship”. I agreed with much of what he had to say. Salient to this theme of today’s post here, Dreher captured well my feelings on the way we as a community come to the table:

One of my favorite poems is this little verse by John Donne, which sums up Anglican view of the Eucharist: He was the Word that spake it; He took the bread and brake it. And what that Word doth make it, I do believe and take it. I don’t think this is just an effort to paper over transubstantiation. I think it is an effort to get at that pre-rationalist way of thinking about the sacraments. What mattered to the average person in the pews then, and what should matter now, is not whether you can write volumes about the Eucharist, but how you experience it. It cannot be reduced to a doctrine defined on a page.

With that thought in mind, I am reposting below a short devotional I wrote 5 years ago for the Caspari Center that addresses the notion of what the “remember” in Jesus’ command to do this (communion) in remembrance of him. In low-church, non-liturgical congregations, this is a helpful starting place for church leaders and congregants alike to begin to consider how communion might be more than just another thing to add to the morning’s agenda. Following this post, there’a a link to a short reading I wrote for a non-denominational church as a lead-in to communion.

There were about 25 teenagers chattering with one another in the activity room of the church, but they fell silent for a moment as I walked a bicycle into the room and propped the bike’s kickstand into place. As soon as I did, their questions flew like confetti:

“Whose bike is that?”

“Why did you bring a bike in here?”

“Are you giving it away?”

“Are you going to ride it?”

I’d been asked to talk with the church youth group about communion, and was counting on the bike to help the teens think about the Lord’s Supper in a new way. I asked if any of them knew what the term ‘muscle memory’ meant (they didn’t), so I told them that there was a formal name for a phenomenon they’d all experienced. “If you regularly practice a specific motor skill like typing, throwing a ball, or playing an instrument, the movement becomes embedded in your long-term memory and you can do it without thinking about it.”

I nodded, and told them about something I’d done throughout my growing-up years that had become a part of my spiritual ‘muscle memory’ – my Jewish family’s yearly Passover Seder. The ceremonial meal recounting God’s miraculous deliverance of my people from generations of slavery in Egypt was both ritual and feast. My grandfather insisted on reading every passage in the Haggadah, the booklet guiding the recounting of the Exodus story. The symbols of water, egg, parsley, saltwater, bitter horseradish, sweet charoset (an apple-cinnamon-wine-nut mixture), lamb shank bone, wine and matzo (unleaved bread) were the centerpiece of the table, living illustrations of a true story that had been passed down for generations in obedience to God’s command to remember and retell (Ex. 13:8). The Seder meant active participation for everyone as we sang, prayed, ate and remembered.

This sort of active, participatory remembrance was captured in the Apostle Paul’s familiar words in 1 Corinthians 11:23-26:

For I received from the Lord what I also passed on to you: The Lord Jesus, on the night he was betrayed, took bread, and when he had given thanks, he broke it and said, ‘This is my body, which is for you; do this in remembrance of me.’ In the same way, after supper he took the cup, saying, ‘This cup is the new covenant in my blood; do this, whenever you drink it, in remembrance of me.’ For whenever you eat this bread and drink this cup, you proclaim the Lord’s death until he comes.

“When we hear the word ‘remember’, most of us think of recalling information – recollecting the information for a test, or trying to think of where you left your house key,” I told the teens. “But the word ‘remember’ in this passage is a deep kind of muscle memory remembering, like riding a bike. It goes far, far beyond simply remembering the facts about what Jesus did for us.”
I reminded them that communion was rooted in Yeshua’s final Seder meal with his friends, and that remembering him at communion means bringing to active remembrance the context in which this sacrament was given us.

Then I flicked the kickstand up and climbed onto the bike. I hadn’t ridden a bike for nearly thirty years, but was betting that the skill was so deeply embedded in my muscle memory that I would still be able to do it. “How many of you think I’m not going to be able to ride this bike since I haven’t been on one for three decades?” The room erupted into laughter. They all were certain I’d fall or crash into something.

I was wobbly, but I successfully pedaled a couple of laps around the room’s perimeter. I simply had to bring that my long-dormant skill to active remembrance in order to do it. (I hoped that the image of me pedaling around the room would not be what the teens would remember the next time they took communion!)

Jesus infused new meaning into the cup and the unleavened bread at the final Seder he shared with his friends when he told them that these familiar symbols proclaimed the deliverance and new life he came to bring each one of us.

All we must do is receive his gift…and remember.

Link to the reading

Question: If you attend a church where communion is strictly memorial, how often do you share it as a congregation?

NOTE: Apologies for the spacing issues above – importing the text created some formatting issues with the paragraphing.

* We are attenders at this church for family reasons right now.

** As of late last week, the publisher has created a new title for the book. Stay tuned for an announcement and cover image soon!

January 9, 2016
Unintended Consequences of the Jesus Movement: Our Swag
Next Post