In Search Of Mercy 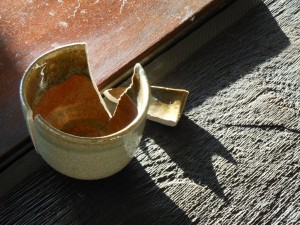 Two men went up to the temple to pray, one a Pharisee and the other a tax collector. The Pharisee stood up and prayed about himself: ‘God, I thank you that I am not like other men–robbers, evildoers, adulterers–or even like this tax collector. I fast twice a week and give a tenth of all I get.’

But the tax collector stood at a distance. He would not even look up to heaven, but beat his breast and said, ‘God, have mercy on me, a sinner.’” (Luke 18:9-14 NIV)

Imagine the scene Jesus described in this parable. A man bowed under the weight of his own failures enters a large, welcoming courtyard. Perhaps he’s young – in the prime of his life – but today he is moving like an old, arthritic man carrying an invisible weight. As he nears his destination, the tears he’s been fighting to hold inside spill down his face.

He begins to sob and can move no further. He reaches out in prayer as if he’s grabbing a lifeline, and then, as he looks at his outstretched hand, he begins weeping anew. In a sudden, stabbing movement, he balls his hand into a fist and brings it sharply into his chest.  He repeats the motion again and again…left fist, right fist, left fist.  It is an action typically reserved for women mourners of his culture, a visceral, deeply physical response to his shattered heart.

But another man, bold and proud, standing at the front of the courtyard, cannot ignore the unwelcome sinner raising such a ruckus. This spotless man is used to performing his spiritual life as if he’s on stage in order to receive the applause of others. Now, suddenly, the spotlight is off of him. He doesn’t like it one bit. When he glances over his shoulder at the cause for the disruption, you can see a look of annoyance flicker across his face before he composes himself. He’s a professional, after all.

This religious leader wants everyone in that courtyard to know there is a right way to express oneself before God, and the howling mess of a man behind him is simply not doing it right. The leader throws his shoulders back as if he’s giving a lesson in the Right Way to Pray. You can see his face tilt upwards, his hands cupped upwards just so.  He continues his oration aimed at heaven, but the other man’s cries for God’s help are impossible to ignore.

In a final attempt to regain the attention of the crowd, the religious leader whirls around.  He flicks his wrist like he’s aiming a cannon at the weeping man, firing a dismissive gesture toward him. It says, “Look away. He can’t show you the way to God. I can.”

He then turns back to his perfectly-crafted memorized words. The crowd’s attention is back on him as he prays.

Almost everyone’s attention in the crowd, that is. The weeping man, prostrate on the dusty ground, offers from his heart the words God longs to hear from each one of us looking to restore our relationship with him: “God, have mercy on me, a sinner.”

An earlier version of this devotional is in this book. I revisited it recently when I put together a devotional for our friends at the Caspari Center for Biblical and Jewish Studies. We who call ourselves followers of Jesus are always in need of remembering that both men in the parable are seen and loved by the Storyteller – but it is our awareness our our need for mercy that gives us hearing eyes and seeing ears for the love he offers us.

May 12, 2016 At The Intersection Of Time & Eternity: Pentecost
Recent Comments
0 | Leave a Comment
Browse Our Archives
get the latest from
Evangelical
Sign up for our newsletter
POPULAR AT PATHEOS Evangelical
1